Jim Harbaugh has seen a lot of success as a head coach. At San Diego, he guided the Toros to back-to-back Pioneer League championships. At Stanford, he led the Cardinal to an Orange Bowl, and coached two Heisman runner-ups. in San Francisco, he took the Niners to three straight NFC Championship games, including one Super Bowl appearance. Now, he's been named the head coach of the University of Michigan, and is about to see something else–a whole lot of cash.

The Wolverines offered Harbaugh a seven-year contract, paying him $5 million per year, with a $2 million signing bonus. He'll also get annual increases after years three and five, and has a ton of incentives. Everything from team academic performance, to appearances in conference championships and national playoff bowl games, will earn Harbaugh extra money. It makes him among the top five highest-paid coaches in all of college football. If he reaches all of his incentives at the max payout level, he stands to earn about $8.33 million this year. 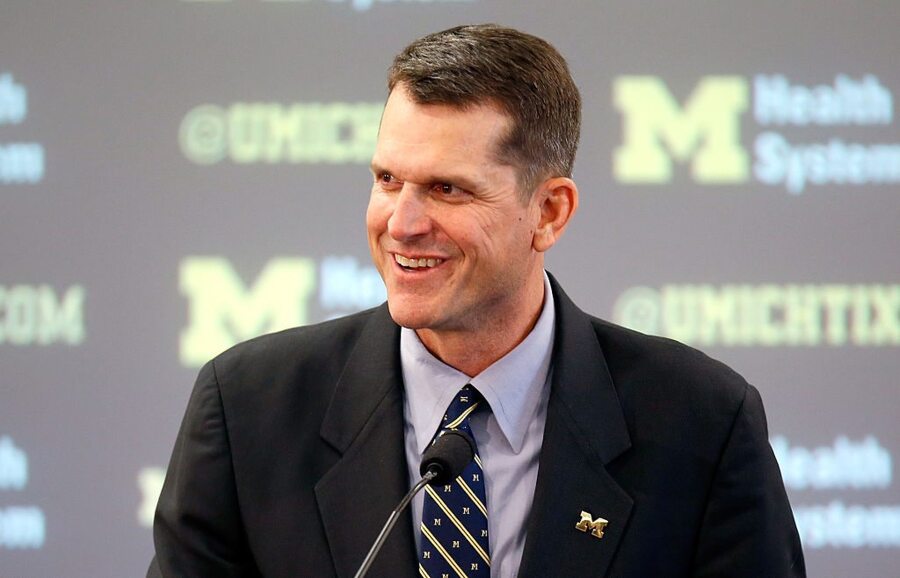 Harbaugh has called it a "dream come true." After all, he played at Michigan himself in college, and aside from his stint with the 49ers and two seasons as a quarterbacks coach with the Raiders, all of his coaching experience has been in college. But to truly get a feel for how much Harbaugh is making, let's look back at some other college coach paycheck milestones.

When Harbaugh was a senior at the University of Michigan, back in 1986, he played under the legendary Bo Schembechler. In 21 seasons at the helm, Schembechler led Michigan to an outright win or share of an incredible 13 Big Ten Conference titles, and amassed an overall record of 194-48-5. His base salary during Harbaugh's senior season? A meager $108,102. Remember, this is a man who by that time had already won over 150 games, and was only being paid roughly $1930 per win.

Of course, it's helped that Michigan's TV revenue–and by extension, its athletic department budget–has grown mightily, too. During Schembechler's last year as a coach (1989), Michigan earned $1.6 million in television revenue TOTAL. They earned almost a million more than that PER GAME in 2014, raking in $31 million total in television revenue alone.

During this decade, the athletic budget has grown by at least 5% every year, from $84.6 million in 2010 to a projected $151.1 million in 2015. And the best football coaches are reaping in the benefits of a more expansive budget.

Bobby Bowden, then the head coach at Florida State, was the first college coach to earn $1 million per year in salary, way back in 1995. 72 college coaches made at least $1 million this past year. 27 reached the $3 million mark, something that had only been achieved in 2006.

In less than 20 years, the average price tag to convince a coach to come to a school has risen, and the schools are acting accordingly. In Harbaugh's case, he's making what he earned at the professional level. Technically, this isn't a promotion. Though now, he has a chance to return his alma mater to national prominence. And that was just too good an opportunity to pass up.