MTV's reality TV series Jersey Shore was all the rage back in the day. The show ran from 2009 to 2012 and followed eight housemates who lived in a summer home in the Jersey Shore of New Jersey. The show was very popular and is the most viewed series ever on MTV. Jersey Shore was also controversial in how it portrayed Italian-American stereotypes. The reality series has inspired remakes in other countries and classes about the show have been offered at the University of Chicago and the University of Oklahoma. The cast of Jersey Shore was even a part of Barbara Walters' 10 Most Fascinating People list in 2010. Here is a look at what has happened to each of the cast members and how much they are worth. 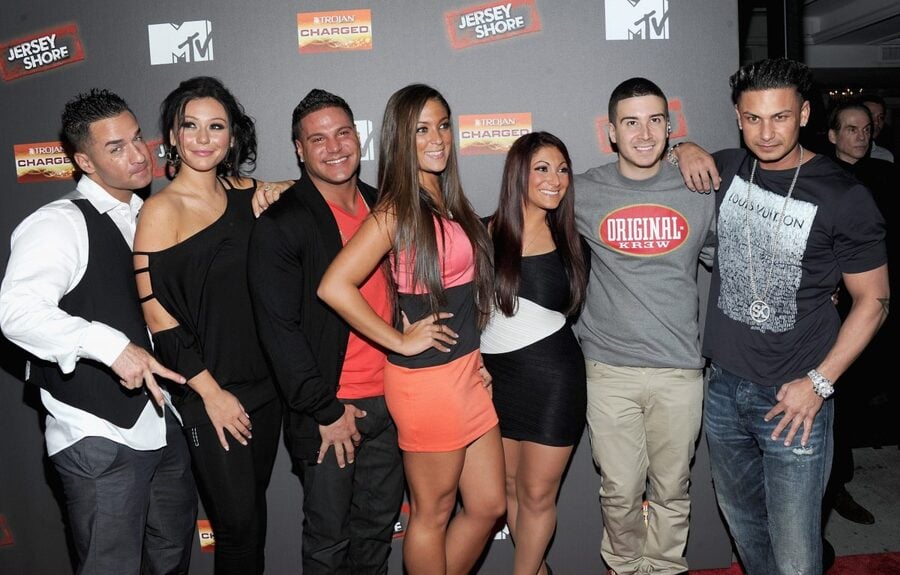 "Pauly D" Paul DelVecchio:  Pauly D is a disc jockey who was nominated for the America's Best DJ competition in 2010. In 2011 he signed a three album deal with 50 Cent's G-Unit Records. Pauly was the first Jersey Shore cast member to get his own spin-off reality show The Pauly D Project. He opened for Britney Spears on her Femme Fatale Tour in 2011. Pauly D became a father in 2013 and has been part of a custody battle.

"JWoww" Jennifer Farley: JWoww is a graphic designer and club promoter. Just before she turned 21 she had breast augmentation surgery as a birthday present to herself. She was part of the Jersey Shore reality spin-off show Snooki & JWoww. Farley has also starred in the reality TV series Marriage Boot Camp: Reality Stars. She promotes sun tan products for Australian Gold and runs her clothing line Filthy Couture and design company Jenni Farley Designs Inc. JWoww authored the book The Rules According to JWOWW: Shore-Tested Secrets of Landing a Mint Guy, Staying Fresh to Death, and Kicking the Competition to the Curb. She gave birth to her first child in 2014 and has been a strong gay rights advocate.

Sammi "Sweetheart" Giancola: Sammi has worked on modeling campaigns for magazines such as People, Us Weekly, Life & Style, and Harper's bazaar. She launched her perfume "Dangerous" with Snooki in 2011. Sammi Sweetheart started her own brand of brightly colored fitness wear which features yoga pants, jackets, and sports bras and featuring her signature sweetheart logo.

Vinny Guadagnino: Vinny worked as a political aide for a New York State Assemblyman before appearing on the Jersey Shore. After the show he took acting classes and guest starred on MTV's series The Hard Times of RJ Berger. In 2013 he starred in MTV's talk show The Show with Vinny. He also starred in the film The Gate of Fallen Angels in 2009 and appeared in two episodes of the TV series 90210 in 2011. Vinny has been a frequent guest on The Wendy Williams Show and Bethenny.

Ronnie Ortiz-Magro: Before Jersey Shore Ronnie worked in real estate for his father. Ronnie was arrested for aggravated assault in 2009. As an actor he has appeared in advertisements for Xenadrine. For a time Ronnie was also featured on TNA Wrestling's Impact Wrestling as a wrestler and personality.

Nicole "Snooki" Polizzi: Snooki got her nickname from being the first one of her friends to kiss a boy. She appeared on the MTV series Is She Really Going Out with Him?. In January 2011 her book A Shore Thing was published. Snooki wrestled in a 6-person tag team match at WrestleMania XXVII. In 2010 she was cited for disturbing the peace in New Jersey and in 2011 she hit a parked traffic police car in Italy. She was featured on the Jersey Shore reality spin-off show Snooki & JWoww which she also produced. Snooki was a contestant on Dancing with the Stars in 2013.

Michael "The Situation" Sorrentino: The Situation was an assistant manager of a fitness center who also has worked as an exotic dancer. He was a contestant on Dancing with the Stars in 2010 and on Celebrity Big Brother in 2012. Mike published an unsuccessful book and has his own DVD fitness series as well as a clothing and vitamin line. In 2011 he was offered money by Abercrombie & Fitch to not wear their clothing. He starred in the series New Stage in 2011 and in the reality series The Sorrentinos in 2014.

Angelina Pivarnick (Seasons 1 and 2): Angelina left after Season 2 but made cameos in Seasons 5 and 6. Before Jersey Shore Angelina worked as a bartender. She has been involved in incidents at the Trump Taj Mahal Hotel and Casino and at a nightclub in Florida. She released the song "I'm Hot" in 2010 and "Gotta Get Out" under the name Miss AP in 2011. Angelina starred with her boyfriend on the VH1 reality TV series Couples Therapy. She was also featured on TNA Wrestling's Impact Wrestling and the TV series The Familia.

Deena Nicole Cortese (Seasons 3 through 6): Deena was originally rejected for the cast for Season 1 but joined in Season 3. Deena earned her dental assistant's license before appearing on the show. She appeared on the reality TV series Snooki & JWOWW from 2012 to 2014.