Imagine Getting Paid $25 Million To NOT Show Up For Work. The Story Of Charlie Weis And Notre Dame…

Charlie Weis coached the Notre Dame Fighting Irish from 2005 to 2009. Yet he's going to receive money from the school through the end of this year. So far, Weis has made just shy of $15 million to NOT coach the team, $14,857,379 to be exact. In fact, Weis could make about $24.5 million in the coming years from the Fighting Irish and the Kansas Jayhawks without coaching either of them.

How is this possible? Well, it's mostly thanks to an extremely generous severance package. After being fired in 2009, he was given about $6.6 million from Notre Dame. Since then, he's received an annual payment of $2,054,744. Notre Dame has "additional annual payments" through December 2015. The  $15 million represents his earnings through 2013. Two more annual payments mean Weis will have received just shy of $19 million from a team he hasn't coached in six years. 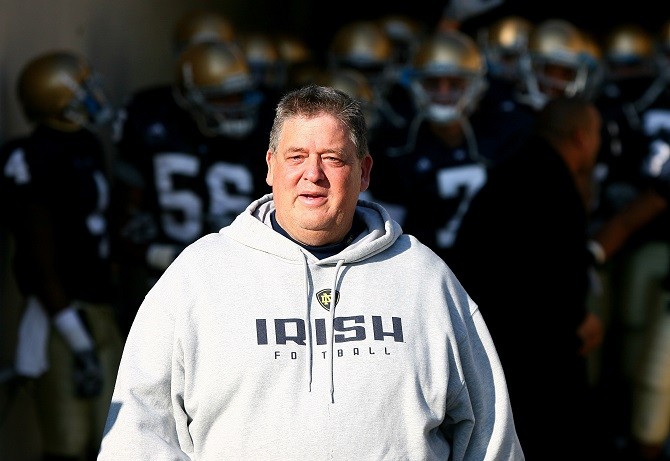 Weis did coach at Kansas for a little more than two seasons, but was fired last fall after just four games. At the time of his firing, he was still owed $5.63 million according to his contract. And you'd better believe he's going to collect that money – the Associated Press reports Weis will be paid monthly, through December 31, 2016.

That's a grand total of just about $24.5 million… that's pretty impressive, particularly when you consider what Weis's successor and current Notre Dame coach, Brian Kelly, has earned during his time with the school: during the 2013 reporting period, he made $995,244 in base pay; through bonuses and other benefits, he took home $1,187,272. The year prior, when Notre Dame reached the BCS National Championship, Kelly's base pay was $698,140.

That means Kelly, who has been coaching the Fighting Irish since 2010, has made less in base pay for two years than Weis makes in one year of not coaching. Even accounting for bonuses and other benefits, Weis has brought home more money. Kind of reminds you of the guy who slacks off at work and still gets promoted, doesn't it?

And in case you were wondering, Weis makes more than any other athletic figure at the school, too. Athletic director Jack Swarbick, men's basketball coach Mike Brey and women's coach Muffet McGraw all earned less than $1.8 million during the 2013 reporting period. Simply incredible.