Illegal Rhino Horns Worth Millions Seized By Authorities In Thailand

Earlier this month, Thai authorities nabbed almost $5 million worth of rhinoceros horns that were being smuggled into the country from Ethiopia, according to the Chicago Tribune. How many rhino horns is that exactly? Well, in this particular case, that's 21 horns, described as being "unusually large" in size, and weighing about 110 pounds in total.

Even the customs officials who confiscated the horns seem blown away by their size and beauty in their statement to the press, which also alludes to a previous incident at this same airport in Bangkok, where less than two years ago another smuggled shipment of rhino horns – that one valued at about $600,000 – was seized:

"The rhino horns we confiscated this time are the most beautiful horns we've ever seized from this airport."

Rhino horns, despite the criminality of poaching and hunting endangered species of rhinoceros, are a luxury item in Vietnam (think the way Cuban cigars have been thought of in the US despite their illegal nature) , and are in high demand throughout Asia due to their use in some forms of traditional Chinese medicine. And it's not just the horns that are used in this way, but the blood, skin, and even urine of the rhinoceros as well. Most rhinoceros do not survive having their horns removed for profit (or for any other reason), but even the ones that do, undergo serious health risks without their horns. 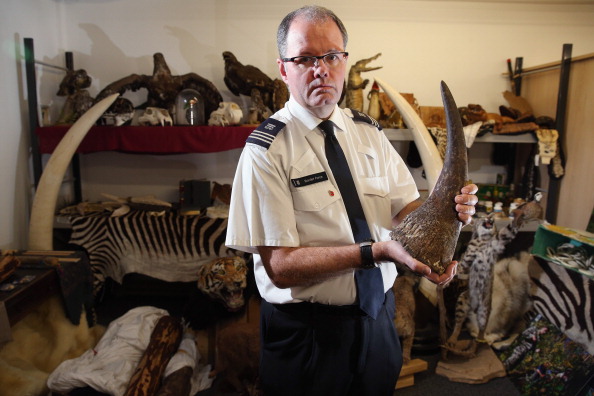 Even though authorities successfully captured these smuggled rhino horns, the smugglers who got them as far as the Bangkok airport were able to escape. They arrived on two different flights, then made a run for it once their bags were being searched. There are warrants out for their arrest, but as of this writing they have not been apprehended.