Pastor Emmanuel Momoh is a minister who also works as a diamond miner in the Kono district of Sierra Leone in Africa. Now, he's also the discoverer of what may be among the largest diamonds ever to be dug out of the earth, following reports from CNN and other media outlets that Momoh found a diamond weighing in at 706 carats.

After finding the diamond, many others in Pastor Momoh's shoes probably would have tried to keep it for themselves, to smuggle it out of the country and unload it to the highest bidder – a mission that would almost certainly have been worth the trouble, since a diamond of such tremendous size could be worth as much as an estimated $60 million or more. But Momoh must be doing OK for himself financially, since he instead opted to hand the diamond over to the Sierra Leone government, as represented by President Ernest Bai Koroma (who is reported to have "thanked him for not smuggling it out of the country"). Presumably not wanting to discover others in Momoh's position from doing the same, President Koroma pledged that after the diamond is sold, an unspecified portion of the proceeds will be given to Momoh as a reward for his actions. 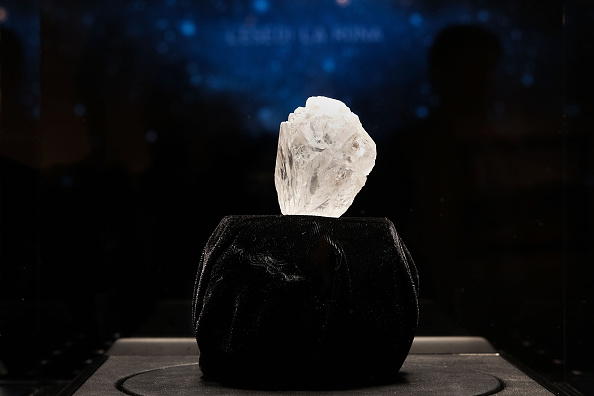 A diamond expert by the name of Paul Zimnisky is quoted in the Daily Mail on the remarkable size of the diamond, saying it's likely to be "between the 10th and 15th largest gem-diamonds ever recovered," and that its true monetary value is impossible to accurately assess until its flaws and coloring are analyzed. He also spoke on exactly why a diamond of this size is such a rare discovery in a mine like the one Momoh works in:

"Most recent exceptional diamond discoveries have been made by large commercial miners that mine very large volumes of kimberlite ore and process it with advanced equipment. Artisanal mining tends to produce smaller, lower quality diamonds because the diamonds suffer breakage and erosion."

President Koroma also pledged to sell the diamond in a "transparent" transaction within Sierra Leone, but according to Zimnisky it's likely that the diamond will be sold outside the country in order to secure the best price.