How Much Does The Naked Cowboy Make Per Year?

New York City's Times Square holds a lot of oddities. There are street performers in every direction, neon lights lighting up the sky, and tacky gift shops hawking cheap souvenirs. In the middle of all of it is Robert John Burck, better known as the Naked Cowboy. He strolls the streets of Times Square wearing nothing but a cowboy hat, cowboy boots, and a guitar (oh and a pair of Fruit of the Loom briefs with Naked Cowboy emblazoned across his derriere.) He's a busker by trade and a true character by nature. But damn, New York City is an expensive place to live. Frank Sinatra sang "If I can make it there, I can make it anywhere" about New York City. But how does the Naked Cowboy make it there? How did he get his start? Just how much does the Naked Cowboy make a year?

Burck was born in Cincinnati in 1970 and earned his bachelor's degree in political science from the University of Cincinnati. He began his career as a busker in 1998 after flying to Los Angeles for a photo shoot for Playgirl magazine. He found out quickly that wandering the boardwalk of Venice Beach with his guitar clad only in his underwear was a pretty easy way to make $100. He's been doing it ever since. 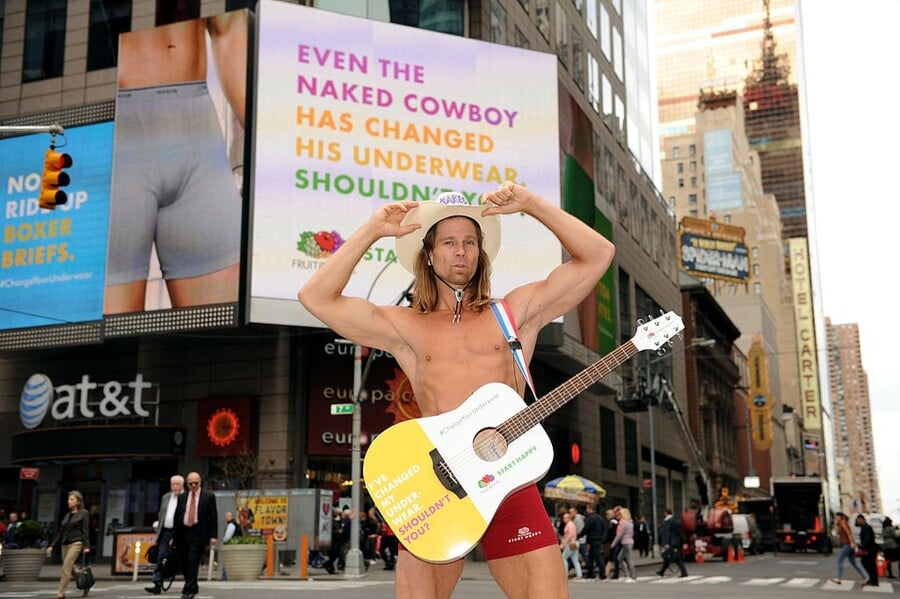 Burck took his act to the Big Apple, but the money didn't come quickly. He was busking in Times Square for three years before it occurred to him to solicit money for his performances. Then one day, a passerby suggested he write "tips" on the back of his boots and BOOM, Burck went from making $40 a day, which just covered his daily parking fees, to nearly $600 per day. The Naked Cowboy was on his way.

Today, the Naked Cowboy is big business. He's written a book, has put out three albums, is sponsored by Fruit of the Loom, and is a spokesman for an oyster company. He's made appearances in music videos for Cake, Tyler Hilton, and Nickelback. He makes a decent living charging people $1 (or more if they are so inclined to throw a fiver his way) for taking a photo of him or with him.

Burck has also put that political science degree to work. He challenged former Mayor Michael Bloomberg in the 2009 election for Mayor of New York City. He eventually withdrew from the race. In the fall of 2010, Burck declared his candidacy for President of the United States challenging President Barack Obama on the Tea Party ticket.

Burck may be making a decent living busking in Times Square, but as we said earlier, New York City is crazy expensive. The average price of a one-bedroom apartment is nearly $4,000. How is Burck making it work?

Make no mistake, the Naked Cowboy may come across as a bit of a redneck loon, but he's got some business savvy that has helped him along the way. Burck wisely trademarked his Naked Cowboy moniker and over the years, has pursued various trademark infringement cases against companies including Mars Incorporated and CBS.

Mars created an ad in which the blue M&M's character was playing a guitar while wearing a white cowboy hat, cowboy boots, and underpants. The ad ran on a display outside of the M&M's store in Times Square. That caught Burck's attention. He filed a lawsuit alleging that M&M's infringed on his trademark by "using his likeness, persona, and image for commercial purposes without his written permission and by falsely suggesting he endorses M&M's candy." He sought $100 million in punitive damages. In June 2008, the court dismissed a portion of the suit while also rejecting a motion from Mars to dismiss the trademark claims. On November 7, 2008, Mars and Burck agreed that the action should be dismissed with prejudice, with each party bearing its own costs and legal fees. The terms of the settlement were not disclosed, but one can guess that they were fairly favorable to Burck.

The CBS suit involved a promo for the soap opera "The Bold and the Beautiful" in which a Naked Cowboy-like figure in the spot "demeaned his image with its drunk and sexually charged portrayal." That case also settled for an undisclosed amount.

So how much does the Naked Cowboy make strolling through Times Square and pursuing trademark infringement lawsuits? $150,000 per year, people. It's good work if you can get it.