The Evolution Of Enormous Boxing Paydays Over The Last 100 Years

With Muhammad Ali's recent passing, the world said goodbye to the greatest boxing legend, and arguably greatest sportsman – of all-time. Ali was accomplished both in and out of the ring, and if you never got to see him fight in person, it's worth the time to look up footage of his fights.

However, when it comes to amassing lots of money through boxing purses, Ali is nowhere near the highest earner of all-time, largely due to the fact boxing prize money has exploded over the past few decades. In total, Ali earned around $20 million in boxing purses during his career. But despite what you might assume, Ali was not the first boxer to take home a massive purse. Below is a detailed history of notable boxing purses over the last 100 years…

More than 100 years ago, a title fight was still a big deal, but the money paid out pales in comparison to today. Defending heavyweight champion Tommy Burns lost to Jack Johnson, and made a meager $30,000 in the process.

Back in 1921, Jack Dempsey defended his title and took home $300,000 in prize money. Six years later, in 1927, Dempsey lost to Gene Tunney, who made $990,000 for the fight. Allegedly, Tunney sent promoter Tex Rickard a check for $10,000 so Tunney's prize check would be for an even million dollars. That looks so much cooler, anyway. 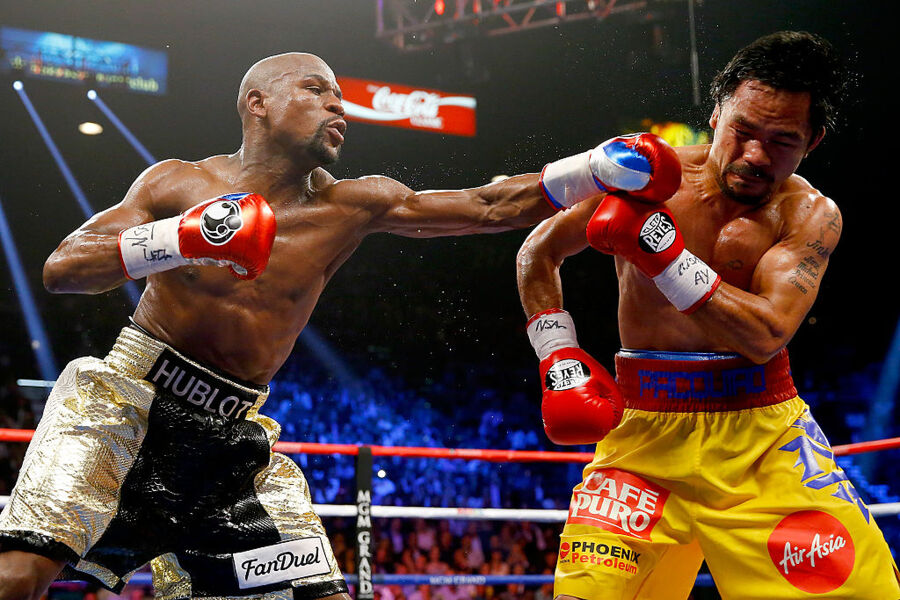 Tunney's record lasted for 44 years, before both Ali and Joe Frazier each earned $2.5 million for participating in the "Fight of the Century," the first time two undefeated boxers fought each other for the heavyweight title. That prize money jumped by more than double in just three years, during the infamous "Rumble in the Jungle" fight. Ali made $5.45 million during the victory, while George Foreman got $5 million despite losing.

Evander Holyfield beat Mike Tyson at the end of 1996, and their 1997 rematch had a ton of buzz surrounding it. Fans today refer to the match as the "Bite Fight," due to Tyson biting Holyfield's ear on two separate occasions; the first time he did it, an inch-thick piece of cartilage came off of Holyfield's ear. Tyson was suspended from boxing and had to pay a $3 million fine, and Holyfield took home $33 million to try and help ease the pain of having part of his ear bitten off.

One of Mayweather's most anticipated fights was against Oscar De La Hoya in 2007 for the light middleweight belt. De La Hoya surrendered his belt, but received $52 million in the process. The fight sold 2.5 million pay-per-view subscriptions, then a record for most ever.

In 2013, Mayweather earned another $80 million in his victory against Canelo Alvarez, and again proved he's a huge pay-per-view draw – the fight drew $150 million in PPV sales.

The Evolution Of Enormous Boxing Purses:

1971 – $2.5 million earned by Ali and Frazier in their heavyweight title match

Mayweather has generated more than $1.3 billion in PPV sales over his career. And seeing how his purses continue to grow to astronomical levels don't be surprised if he takes to the ring one more time before calling it quits.