The Highest Paid Bands Of The Year – You Won't Believe How Much They Made!

If there was any doubt that being in a band is a heck of a great way to get enormously wealthy, the earnings of these eight bands will definitely kill that idea. The bands that made the most money ranged from boy bands to rock to country to pop. There were even a few golden oldies in the group. The earnings of these eight bands were calculated using ticket and merchandise sales as well as record sales between June 2014 and June 2015. Not surprisingly, most of the top earning bands were on huge tours during the year, helping them to make this list. Which of these bands is your favorite? What band out there deserves to make this list next year?

The Zac Brown Band clocked in at no. 78 on the Celebrity 100. A busy tour schedule paid off for this hard rocking country band. They played 78 shows from June 2014-June 2015. The May 2015 release of the band's Jekyll +Hyde album garnered the group their third consecutive number one album. The band's single "Homegrown" hit number one on the Billboard Country Chart. The band made their Saturday Night Live debut this year and appeared in the Foo Fighters' HBO miniseries "Sonic Highways."

Maroon 5 checked in at no. 74 on the Celebrity 100. Adam Levine and his band mates continue to put out hit after hit. Maroon 5's most recent tour had the second highest ticket resale prices of any band on this list. Levine's role as a judge on The Voice helps promote the popularity of Maroon 5. The hit singles for Maroon 5 this past year include "Sugar," "Maps," and "Animals." The band was nominated for three Billboard Music Awards this year. The band is still on tour, so look for them to make an appearance on next year's Celebrity 100 list as well.

Florida Georgia Line landed in the 61st spot on the Celebrity 100. Tyler Hubbard and Brian Kelley's country group had a huge year that included the release of their second album Anything Goes and a big, successful tour for that album. They won the Top Country Artist award at the 2015 Billboard Music Awards and the Vocal Event of the Year and Vocal Duo of the Year awards at the 2015 Academy of Country Music Awards. Florida Georgia Line is also starting to cash in on lucrative branding and endorsement deals with companies such as Mountain Dew.

2015 marks the Foo Fighters' 20th anniversary as a band, and Dave Grohl and company have never been hotter than they are right now. They landed at no. 58 on the Celebrity 100 list on the strength of their most recent record and tour. The band's eighth studio album, Sonic Highways, had eight songs inspired by eight American cities and a corresponding HBO miniseries exploring the musical styles and inspirations the Foo Fighters found in each of those cities. The Foo Fighters appeared on David Letterman's final show, playing the long time late night talk show host's favorite song "Everlong." In June, Grohl fell off the stage at a concert in Sweden and broke his leg. This necessitated the cancellation of a handful of shows in the latter half of June. The Foo Fighters opened their North American tour on July 4th at RFK Stadium in Washington D.C. in a show that marked the 20th anniversary of the band's first album.

The Rolling Stones have been a band for more than half a century. The 26th highest earning act on the Celebrity 100 continues to rock out and cash in when theses septuagenarians hit the road to tour. The Rolling Stones played only 22 shows in the period from June 2014 to June 2015 but they were stadium venues that nearly always sell out. Their hardcore fan base plus the fact that you never know when it will truly be their farewell tour drives audiences to their shows in droves (and pads the bank accounts of Mick, Keith, and company). 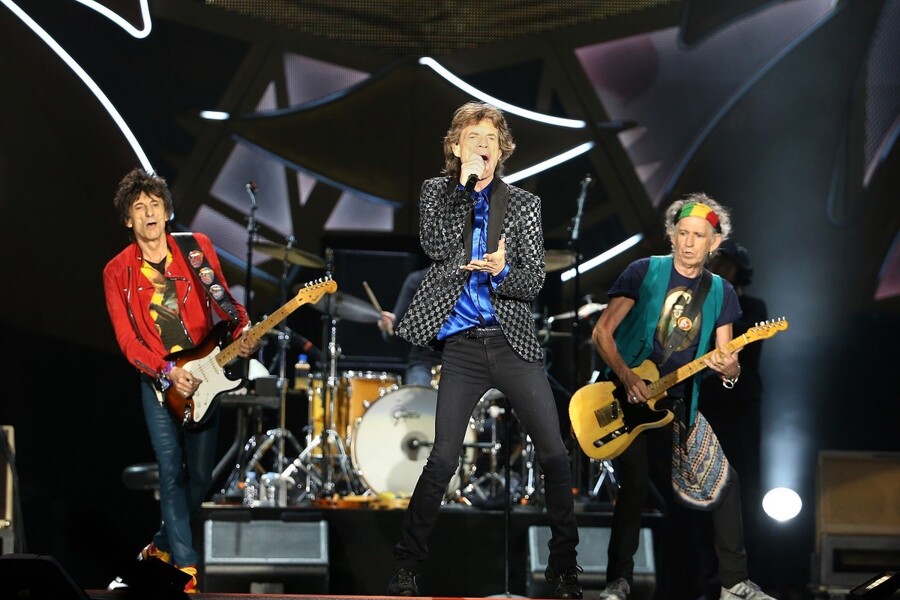 Fleetwood Mac landed in the 24th spot on the Celebrity 100 despite being more than 30 years past the height of their popularity. Mick Fleetwood, Stevie Nicks, Lindsey Buckingham and company show no signs of slowing down. The band's On With the Show tour had 86 concerts during the scoring period for this list. They had the highest ticket resale price with an average of $300 per ticket.

The Eagles landed at no. 14 on the Celebrity 100 despite not having a number one hit single in many decades. The classic rock band always draws a good crowd and their recent History of the Eagles tour was no exception. They played 57 shows over the course of the year from June to June. The band's earnings are boosted by sales of merchandise and DVDs.

Despite all the classic rock, hard rock, pop rock, and country bands on this list, the world's biggest band is still one with a fan base that is not yet old enough to drive, let alone drink. The biggest boy band in the world is also the highest earning band of the year. One Direction came in as the fourth highest earners on the Celebrity 100. Their 74-stop tour netted the boys from England seven figure grosses at each show, making their collective payday more than twice that of the Rolling Stones.