Here Are The Highest-Paid Motorsports Drivers In The World

Professional motorsports can be an extremely lucrative activity, with money pouring in from your salary, various brand sponsorships, bonuses for winning races, and more. Salaries within the world of motorsports also tend to be more secretive than in other sports, but according to recent estimates these are among the highest-earning active race car (and motorcycle!) drivers in the game right now:

The first of many Formula 1 drivers on this list, Hülkenberg's biggest accomplishment in racing so far is probably his 2015 Le Mans victory along with fellow racers Earl Bamber and Nick Tandy.

Larson's most glorious year on the NASCAR circuit came in 2017, when he took home first prize in four races. This year, he recently finished first in the All-Star race, his only victory so far as of this writing.

Joey Logano of Team Penske has racked up some 23 Cup victories and counting in the Monster Energy NASCAR Cup Series, two of them in 2019, and he's earning an estimated $10.2 million a year at the same time.

Keselowski, on the other hand, has 30 victories to his name so far, with three in 2019. All with an impressive yearly take of about $11.2 million.

Harvick has had better years than 2019, which has left him without any NASCAR premier series victories so far. But he's managing pretty well in the financial department regardless, and he has a total of 45 wins to his name.

Denny Hamlin of Joe Gibbs Racing hasn't won a NASCAR premier championship as of yet, but that hasn't stopped him from earning an estimated salary of some $14.6 million a year.

Kyle Busch is probably one of the more famous names in NASCAR, and his $14.7 million estimated salary is joined by an impressive record of 55 career Cup victories.

Viewers of the Netflix original documentary series Formula One: Drive to Survive were privy to Ricciardo's move from Red Bull to Team Renault, a move that likely kept his $15 million salary intact.

You may recognize Verstappen as being the youngest person ever to race in Formula 1 competition, having begun his career when he was just 17 years old. He's a relatively long in the tooth 21 now, but still doing pretty well for himself.

The highest paid NASCAR driver on this list is one of the household names of the sport: Jimmie Johnson, who takes home an estimated $19.2 million a year.

Vettel is one of the very top performers in Formula 1 racing, currently taking in an estimated $30 million a year with Team Ferrari.

Depending on how you count the earnings, Hamilton falls short of being the highest paid racer in motorsports. But the Formula 1 superstar is currently ranked at number 1 on the driver's championship standings, which is almost as good. 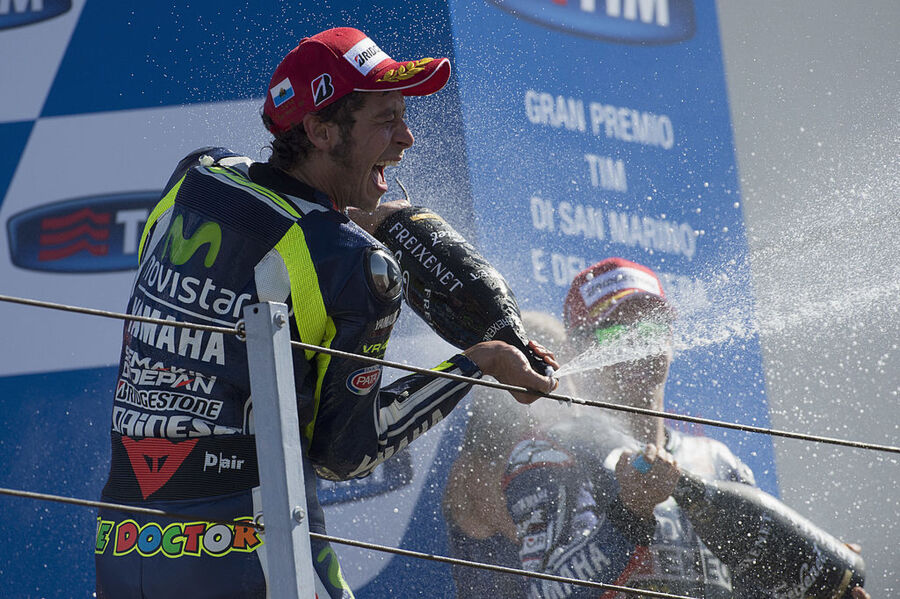 Rossi may no longer be at the top of the MotoGP standings, but his status as one of the "elder statesmen" of the series allows him to command some pretty big bucks, with a salary estimated to be as much as $40 million, thanks to the VR46 junior team he leads in addition to his own racing.