How Much Was Pablo Picasso Worth When He Died?

Typically, when we imagine an artist whose work is significant enough to be hung from the walls of a major international museum, we picture someone who died many many years ago and probably never achieved an ounce of recognition or meaningful compensation during their lifetime. We picture someone who toiled away in obscurity for decades and probably died penniless. Maybe even ear-less. Artists like Vincent Van Gogh, Paul Gaugain, Johannes Vermeer and countless others, never achieved any recognition during their own lifetimes and died without a pot to piss in. Today these same artists are considered some of the greatest masters in history. And while they may have died penniless, today their creations sell for hundreds of millions of dollars.

On the other hand, there have been a few artists who managed to achieve both fame and fortune during their days on earth. A great example is Pablo Picasso. A lot of people don't realize that Picasso was alive and producing art right up until his death in 1973. Next time you see a friend who was old enough to get on a plane in 1973, kick them for not flying over the France and getting Picasso to doodle something on a napkin. That napkin would be worth millions today.

So what happens when an artist like Pablo Picasso dies? Someone who was very much appreciated during his life and whose paintings were already being traded for vast fortunes. What was the value of Picasso's estate and what happened to his huge personal collection of priceless paintings after he died in 1973? 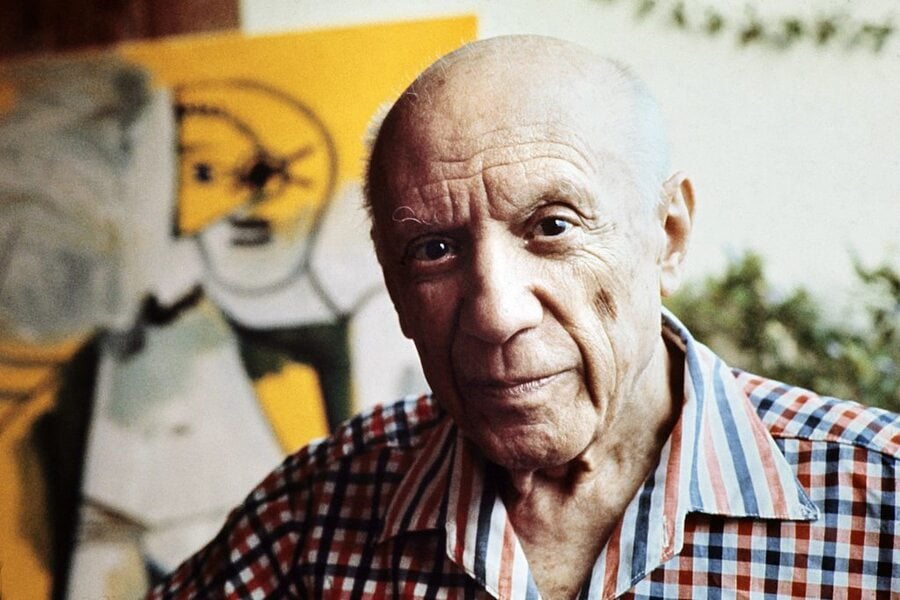 Pablo Picasso, born Pablo Diego Jose Francisco de Paula Juan Nepomuceno Maria de los Remedios Cipriano de la Santisima Trinidad Ruiz y Picasso, started his life in Malaga, Spain on October 25, 1881.  His father was a respected painter, specializing in naturalistic representations of birds and other wildlife, as well as a curator.  When Picasso began to exhibit real artistic skill before he started school, his family took it in stride.  His father began training him in figure drawing and oil painting when he was seven years old, and as Picasso's skill grew, his ability and willingness to focus on regular school work waned.  Over the next six years, his abilities would continue to grow, and it became evident that he was outdistancing his father's artistic ability in leaps and bounds.  Picasso's younger sister passed away in 1895, and the family moved to Barcelona.  He was devastated by his sister's death and the move proved to be a good one for him.  In Barcelona, his father worked for the School of Fine Arts, and convinced school officials to allow his thirteen year old son to complete the entrance exam for inclusion in upper level art classes.  Picasso blew everyone away, completing the month-long exam in a week, and wowing the judging committee with his talent.

By age 16, it was clear Picasso needed to be challenged further.  He was sent to the prestigious Royal Academy of San Fernando in Madrid.  At the time, it was the premier art school in Spain.  He didn't last long there, however.  He chafed against the rigid class structure and artistic rules, and dropped out almost as soon as he started.  He lived in Paris briefly, where he shared an apartment and worked with Max Jacob, a journalist/poet.  The pair of artists had very little money, and took to burning Picasso's paintings in order to keep their apartment warm.  After returning to Madrid in 1900, he illustrated an anarchist journal with his friend, writer Francisco de Asis Soler.  By 1901, he'd begun to show a distinct style and he'd started signing his paintings and drawings simply – Picasso. 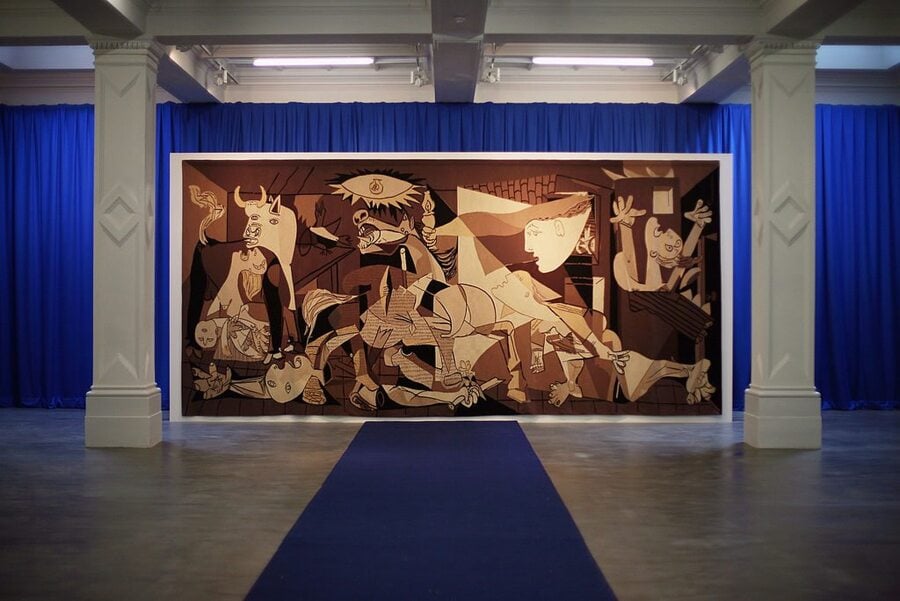 Over the course of the next decade, his artwork would reflect four distinct periods.  Each period was directly influenced by what was going on in his personal life, as well as his experimentation with various styles.  His "Blue Period", which lasted from 1901-1904, approximately, is typified by bleak images of gaunt figures, blindness, and destitution.  The paintings are always in shades of blue or muted greens, and rarely feature any other colors.  At the time, Picasso himself was destitute and depressed after the suicide of a good friend.  However, in 1904, he met Fernande Olivier, a female French artist, and fell in love.  Suddenly, his work began to reflect his more positive outlook on life.  The colors and subject matter became warmer and happier.  Known as the "Rose Period", he produced cheerful works through 1906.  Gertrude Stein began exhibiting his paintings and supporting his ability to focus on artwork, and by 1907, he'd begun to make a name for himself in international galleries.  In 1907, he began to experiment with aesthetics present in African art, using various African sculptures and drawings as points of reference.  This period, known as the "African-Influenced Period", lasted until 1909.  However, it was his Cubist work, created from 1909-1912 in collaboration with fellow artist Georges Braque, that finally put him on the map. He created many of his most famous pieces between 1907 and 1917. 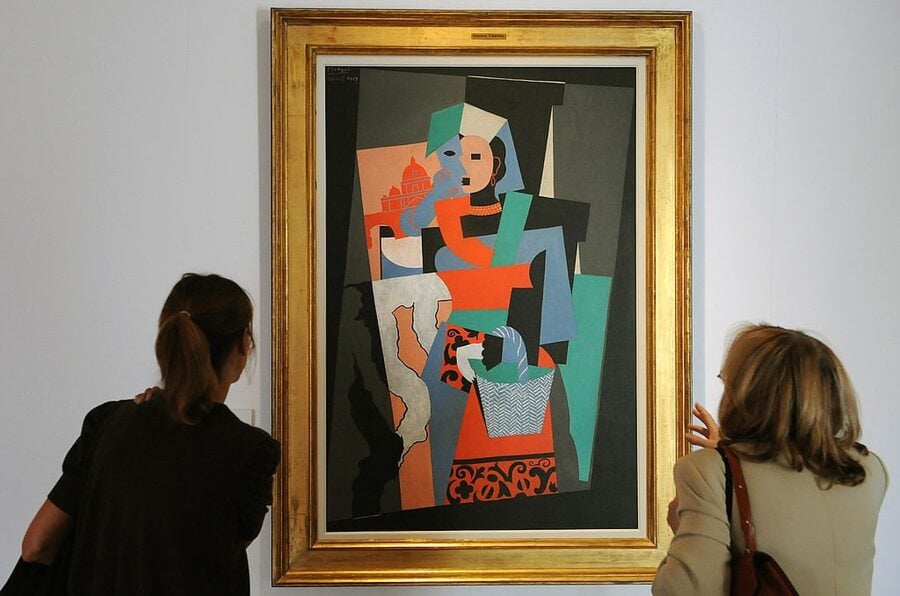 He then shifted his focus to classicism and surrealism, influenced by WWI and WWII.  He also began sculpting.  Post-WWII, he again shifted his style.  His later work was often looked at askance by the artistic community.  He began experimenting with styles wildly, and his use of color became more flamboyant.  He also worked quickly, churning out paintings and etchings at an astonishing rate.  It was not until many years after his death that critics actually looked as his later work with an unbiased eye.  Viewed altogether, it was clear that he had been creating in a style that later became known as neo-expressionism, long before anyone else had even begun to consider the idea.  He passed away on April 8, 1973.

Picasso's personal life had been a series of intense relationships, with multiple wives and mistresses.  He married twice, and had at least three mistresses, resulting in four children.  After his death, one of his mistresses and one of his wives committed suicide.  Due to his multiple relationships and children, dividing his estate turned into a massive, and very messy, undertaking.  Unlike many other famous artists who died practically destitute, Picasso had become famous during his lifetime.  When he passed away at age 91, he owned a great deal of valuable artwork (thousands of his own paintings), five properties, a large savings account, gold, and bonds.  What he didn't have, however, was a will.

The lack of a will meant that suddenly everyone in his personal life was vying for a piece of the Picasso pie.  He had four children by three different women, but only one of the women was his wife.  One of his mistresses, a fellow artist, had not had any children with him, but she had been with him for decades and had a well-documented influence on his work.  Adding to the turmoil, was the fact that he was not the best of fathers.  He was known to have abused one son, and ignored the two children he fathered with one of his mistresses. In short, dividing his estate was a huge disaster.

So, how much was Pablo's estate worth in 1973? A court appointed auditor who has charged with evaluating every asset in the late artist's estate, concluded that Pablo was worth between $100 and $250 million. That's equal to $530 million to $1.3 billion today, after adjusting for inflation.

The vast majority of this value came from Pablo's personal collection of thousands of paintings, drawings and sculptures. He reportedly left behind 16,000 paintings. Another huge asset that would soon cause a major war between the heirs was Picasso's image rights. Which family member would be allowed to license a line of Picasso paint brushes or children's coloring books?

From 1973 to 1979 his family fought bitterly over the estate.  The battle took six years and cost $30 million in legal fees alone to settle.  The problems didn't stop there though.  His children and grandchildren began fighting over who could have the right to use his name. In 1989, Claude Picasso, the only living son of the Picasso half-siblings, sold the Picasso name, and the image of his signature, to PSA Peugeot-Citroen.  Peugeot-Citroen planned to release a $16,000 compact family sedan called the Citroen Xsara Picasso.  One of Picasso's grandchildren filed to stop the sale, but only because she wanted to challenge the commission paid to the consulting company that helped broker the deal.  The consulting company, it turned out, was owned by her cousin, another Picasso.

Since selling off most of Picasso's personal art collection and other physical items of value, the Picasso heirs today are each extremely wealthy. Most of their fortunes have come from selling his name to everything from perfume to restaurants.  In 1999, The New York Times estimated that his eldest daughter Paloma Picasso was worth $600 million dollars. And despite being extremely wealthy, they continue to fight to this day over which brands and products are allowed to bear their family name.  While any sale of his work gets press coverage, it is actually the continuing family feud that keeps Picasso in the headlines more than anything else.  Sadly, that's probably not the legacy he intended to leave, back when he was a four-year old sketching with his father in Spain.