How much does a garbage man make? Garbage men, aka sanitation worker, waste collector, trash collectors, or refuse and recyclable material collector, earn an average salary for the services they provide. Garbage men are employed by public or private enterprises to collect and remove refuse and recyclables from commercial, residential, industrial and other collection sites, delivering the refuse for further processing and disposal. Garbage men are trained to pick up garbage from residential, commercial, and industrial locations in rural areas, towns or cities. Most garbage men are trained to manually pick up refuse bins and drive the sanitation truck that lift the garbage containers and dumps the contents into the moving truck. Garbage men are also trained to pick up yard waste and recycle bins when used in residential and commercial locations. Garbage men must drive the truck using hydraulic lifts on their vehicles to pick up and empty dumpsters. Garbage men must successfully maneuver their truck through their scheduled route in all kinds of weather and conditions to complete their scheduled services. Once trash is collected, the next step is to send the refuse to a landfill. Garbage men are generally responsible for helping households and businesses dispose of garbage. At a landfill, massive amounts of garbage are usually placed in the ground. Workers at landfill facilities are also called sanitation workers. 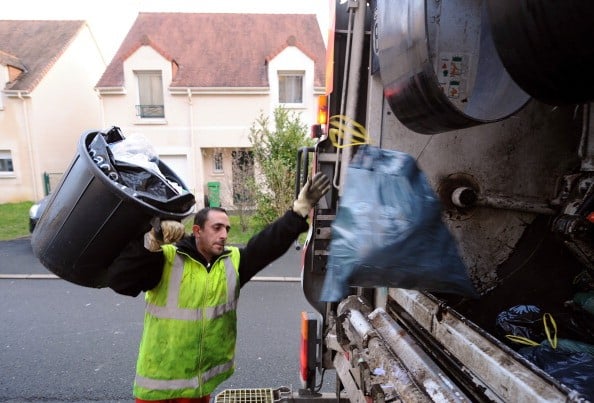 Job duties for garbage men may include the following tasks:

Refuel trucks and add other necessary fluids, such as oil.

Fill out any needed reports for defective equipment.

Drive to disposal sites to empty trucks that have been filled.

Drive trucks along established routes through residential streets and alleys, or through business and industrial areas.

Dismount garbage trucks to collect garbage and remount trucks to ride to the next collection point.

Keep informed of road and weather conditions to determine how routes will be affected.

Garbage men typically require a high school diploma in order to obtain this job. Material moving jobs require little work experience or training prior to employment. The projected job growth for sanitation workers is 14% to 19%, a faster than average rate.

How much does a garbage man make per hour?

A 2008 Bureau of Labor Statistics report shows the median hourly wages for refuse and recyclable material collectors was $14.93. Wages generally are higher in metropolitan areas.

How much does a garbage man make per year?