The 14 Most Expensive Yachts In the World

The super-rich have got it made. They have homes in multiple cities, states, countries, and continents. Their garages are full of insanely expensive cars that cost more than most people's houses. They can indulge their desires for private planes with interiors that rival the most luxurious hotel Presidential suites. Heck, if they really wanted to, and some do, they can buy their own islands (Sir Richard Branson, I'm looking at you). But you really aren't a true billionaire until you've commissioned your very own, very huge, very expensive, mega yacht. A yacht that features all the comforts of home and more — like a helicopter pad, submarines, and disco.

The yachts you are about to see are so lavish, so well equipped, and so expensive that those sailing on them want for absolutely nothing. Sure, they can't create peanut M&Ms in the middle of the Indian Ocean if they are all out on the ship, but pretty much anything you want is at your fingertips. And let's face it, if someone on-board is craving a certain wine that isn't on board, they can send their helicopter out to fetch it. More than anything else, the mega yacht is a symbol of power and wealth. It is an ocean faring Ferrari times a thousand. It is a floating display of the size of your manhood… I mean bank account. Let's take a look at the most expensive yachts. They are truly amazing.

This yacht was originally owned by Larry Ellison, the CEO of Oracle. Its current owner is music and film mogul David Geffen. This yacht has often been called a floating mansion. It is, of course, fully furnished with more amenities than you or I can even think up. It has a basketball court that doubles as a helicopter pad for those middle of the ocean peanut M&M runs. This 453 foot yacht has five floors, 82 rooms, ad four propellers that allow it to cruise the seven seas at the speed of 33 MPH.

Steven Spielberg's 282 foot mega yacht was constructed by the Dutch shipyard Oceano. It was constructed to his specifications and tastes. It has an infinity pool with a 15 foot glass surface that can be used as a movie screen. It has its own fully equipped gym, helipad, and private deck for Spielberg. It can house 12 guests and has a crew of 26 to run the ship and attend to the guests.

Nasser Al-Rashid, a Saudi multi-billionaire, owns this 344 foot yacht. The name of the yacht is applied to the ship in 24-karat gold. Not much is known about this mega yacht, but you can imagine the opulence, luxury, comfort, and amenities inside of it. If it looks familiar, this is the yacht that was used in the movie "Wolf of Wall Street".

This 133 foot yacht is owned by the former Prime Minister of Qatar, Hamad bin Jassim bin Jaber Al Thani. It was designed by Tim Heywood and constructed by Peters Schiffbau Wewelsfleth yard. The yacht has 10 suites, which can hold a maximum of 24 guests. There are two VIP rooms created for the yacht's owner. Al Mirqab has its own movie theatre, sun deck, pool, and helipad.

Alisher Usmanov, a Russian businessman owns this yacht that was constructed in 2008. The 360 foot yacht is named after his mother and was also designed by Tim Heywood. Dilbar can accommodate 20 guests with a crew of 47.

How do you know when you are super-duper rich? You own two mega yachts like entertainment industry mogul David Geffen.  Pelorus was originally built for a Saudi businessman and launched in 2003. In 2004, Russian oligarch Roman Abramovich bought the 377 foot mega yacht. When he and his wife divorced, she got the yacht and in 2011 she sold it to Geffen for $300 million. The 337 foot long yacht comes with two helipads, jet skis, and every amenity to cater to a billionaire's friends.

This 509 foot yacht has an aluminum superstructure and was named after its owner, Sultan Qaboos Bin Said Al Said of Oman. While it was being constructed in 2007 and 2008 it was the world's second largest yacht. It can accommodate up to 70 guests with a crew of 154.

This yacht has quite a story attached to it. Originally commissioned by the Prince of Brunei, Jefri Bolkiah in 1996, its construction was stopped due to the Prince's lack of funds. Five years later in 2001, Shiek Mohammd bin Rashid Al Maktoum, Prime Minister of the UAE, took the project over. The 531 yacht has the mega yacht prerequisites of a helipad, swimming pool, and spa. It has been called a floating city because it contains nearly anything a person could want or need.

Radiant was originally built for the late Russian oligarch Boris Berezovsky and is now in the care of Abdulla Al Futtaim a billionaire car dealer from the United Arab Emirates. Radiant's features are fit for James Bond—or perhaps one of his super villains.  The 360 foot fyacht has sonic guns designed to burst the eardrums of attackers, water cannons that can sink a boat from 100 yards away, and a smaller speedboat onboard to allow for a quick escape.  Radiant also has a Jacuzzi, gym, and room for 20 guests.

Russian vodka king Yuri Scheffler owns the 440-foot yacht Serene. The super yacht is equipped with turquoise neon lights to give it a special nighttime glow. It has 48,000 square feet of covered space on seven desks, indoor AND outdoor pools, an outdoor screening room, and 12 staterooms.  Serene was designed in Italy and purchased by Scheffler in 2011.

Andrei Melnichenko, is a Russian billionaire with this gorgeous yacht of unique design. This 390 foot yacht was designed by Philppe Stark and built by Blohm and Voss. The yacht garnered quite a bit of discussion while it was being built. It is relatively small by the standards of this list with a 14 guest, 43 crew/staff limit. It is named for the first initial of its owners, Andrey and Aleksandra Melnichenko. And if this yacht looks familiar, you may remember it from a scene in the Justin Timberlake/Mila Kunis movie "Friends With Benefits".

Topaz was built by Lurssen Yachts in Germany in 2012 and is owned by Mansour Bin Zayed Al Nahayan, the Deputy Prime Minister of the UAE. It is 482 feet long, cost about $527 to build, has a helipad, fitness center, movie theatre, and Jacuzzi.

At 590 feet, the Azzam is longest yacht on the planet. It is longer than some commercial cruise ships. Built by Lurssen Yachts, this mega yacht took four years to build. It is said to have 50 private state rooms and is owned by Sheikh Khalifa bin Zayed al-Nahyan, President of the United Arab Emirates. The yacht was purchased for $627 million which was just a tiny 3.5% of the Sheikh's net worth of $18 billion.

This 536 foot yacht has a crew of 70, 24 guest rooms, two helipads and a mini submarine. Yes, I said submarine. Imagine hitting the bar, getting sloshed and taking a submarine out for a spin in the middle of the ocean…you can on the Eclipse. It belongs to Russian billionaire Roman Abramovich. The most distinctive feature of the most expensive private yacht is its well-designed defense technology. It has its own intruder detecting system. It can detect cameras and has an anti-paparazzi laser shield that scans and blocks nearby prying camera lenses. This yacht was constructed in Hamburg, Germany. 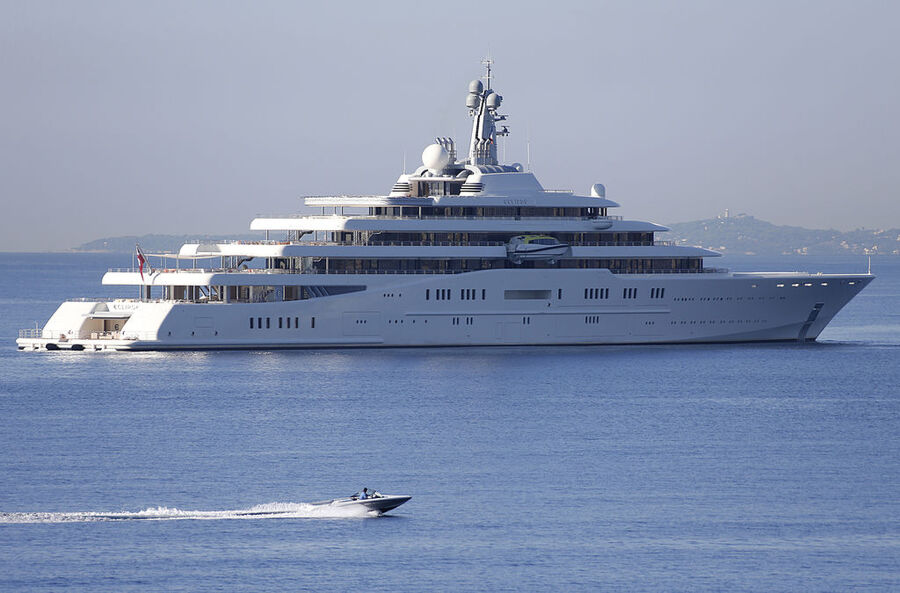 VALERY HACHE/AFP/Getty Images
Did we make a mistake?
Submit a correction suggestion and help us fix it!
Submit a Correction