The Most Expensive Paintings Of All Time

Art is subjective. To some it is the Mona Lisa. To others it's the frenetic abstraction of Jackson Pollock. To others it is an old framed Nagel print from the 1980s, or maybe a simple poster hastily tacked up on a wall. To art critics, historians, collectors, and curators, there are a small handful of paintings that are revered far above all others. And when these prized treasures go up for sale (or, most likely, on the auction block) they fetch sums that would be enough to land buy a small country.

A few websites out there have posted lists of the most expensive paintings ever sold. However, many of those lists are incorrect, obsolete, or completely omit private sales. The list we have put together below features paintings that sold at both public auction and private sales. Where appropriate, prices have been adjusted for inflation to reflect today's dollar and where on the list of top 10 they would then fall. In other words, these are the absolutely definitive most expensive paintings that have ever been sold at auction. It should be noted that we did not include three private sales where the final prices are unconfirmed estimates. Oh, and if you wanted to buy all 10 of the paintings below, you would need $1.5 billion. As crazy as that sounds, it probably wouldn't be a bad investment!

This painting is the most expensive work by Pop Art's most famous legend, Andy Warhol. Known for his prediction that everyone gets 15 minutes of fame and his partying at legendary Studio 54, Warhol was also a serious artist with work that is coveted by collectors of his genre.

This sensual and colorful painting is the most expensive Picasso composition ever sold at auction. It was previously in the private collection of Mrs. Sidney F. Brody and, prior to the auction, had not been exhibited in public since 1961.

This is artist Jasper Johns most famous work. His very first American flag painting is circa 1954-55 and hangs in New York City's Museum of Modern Art.

This instantly recognizable painting was, for a long time, the most expensive ever sold at auction. This particular version of "The Scream" is the most colorful of Munch's four versions of the painting. It is also the only one of the quartet that is still in private hands. 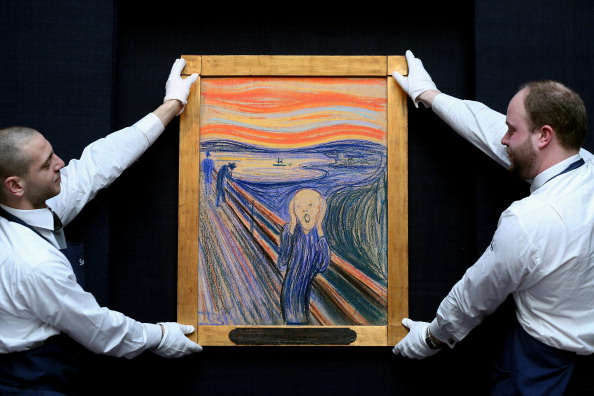 Ronald Lauder of Estee Lauder cosmetics sent a ripple of shock through the art world when he bought this very famous work. The brou ha ha was over not just the price paid, but also the way the work was acquired. It was not sold at auction, as is the norm, not was it brokered private collector to private collector. The painting was one of five canvases that had been returned to the heirs of Ferdinand Bloch-Bauer many years after the Nazis confiscated his artwork during World War II. The paintings had resided in the National Gallery of Austria since 1948.

This is the only of Willem de Kooning's "Woman" series that is still in the possession of private collector. "Woman III" is one of a series of six paintings by de Kooning created between 1951 and 1953 in which the central theme was a woman.

Adjusted for inflation, this famous "drip" work by Jackson Pollock is the most expensive contemporary painting to ever be sold. However, the sale price has never been fully confirmed although the price listed here is thought to be true. The high price is a direct reflection on the increasing interest in works from the contemporary genre of art.

"Three studies of Lucian Freud" is the most expensive painting ever auctioned. It is also a record (before inflation adjustment) for a contemporary work of art. This work is an oil-on-canvas triptych of artist Lucian Freud as depicted by Irish artist Francis Bacon. The two artists were friends and artistic rivals.

Picasso's "Le Rêve (The Dream)" is one of the artist's most famous and sensual pieces. It depicts his lover Marie-Therese Walter on a red chair with her eyes closed. This painting became even more famous when, in 2006, casino magnate Steve Wynn damaged the canvas before the sale to Steven Cohen (for $139 million) could go through. After a $90,000 repair, the painting was re-valued at $85 million and Steven Cohen ended up buying it for even more than was originally set.

"The Card Players" is a series of paintings by the French Post-Impressionist artist Paul Cezanne, which were painted during his final period in the early 1890s. There are five paintings in the series and this is the last version of the famous composition in private collection.