Everything You Need To Know From Week 16 Of The NFL

We're at that point of the season where teams can either play themselves into or out of the playoffs. Some paths are easier than others, but one thing is consistent every year: teams will blow winnable games, and there's always someone coming out of nowhere. In case you missed it, here are the highlights from this past week.

The first game of Week 16 is the most literal answer to this question yet. Sen'Derrick Marks of the Jaguars sacked Tennessee's Charlie Whitehurst on the final play of the game, a game in which Jacksonville won 21-13. By recording that sack, Marks activated a $600,000 bonus in his contract, which was earned by getting eight sacks in a year. Granted, this might be the third time in four years that the Jaguars have won a late-season game against a divisional opponent, and that opponent ended up with the number one pick the following year, but that's a story for another day. Marks certainly earned his money in this one.

San Diego needed an incredible amount of luck to make last year's playoffs, and sitting at 8-6 heading into this week, they needed a similar streak of good fortune. When they went into halftime down 28-7, it was as good a time as any for that luck to kick in. Philip Rivers, playing without top receiver Keenan Allen and starting running back Ryan Matthews, led a comeback for the ages, throwing for 356 yards and four touchdown passes, including the tying one to Malcom Floyd with 11 seconds left in regulation. That pass came after Rivers converted on both a fourth-and-10 and a fourth-and-eight earlier in the drive. Now, just like last year, San Diego simply needs to beat the Chiefs to make it to the playoffs. Of course, this time the Chiefs will be trying instead of playing their second string, but the AFC West is going to give us another awesome Week 17 showdown.

Arian Foster ran for 96 yards and threw for a touchdown as the Texans beat the Ravens, 25-13. Randy Bullock chipped in with six field goals, a career high. Look at the names who have played quarterback for the Texans this year: Ryan Fitzpatrick, Ryan Mallett, Tom Savage, and Case Keenum, who was doing recreational hunting just last week. And somehow, they're still in the playoff picture (though they'll need quite a bit of help from other teams). Just incredible.

There simply aren't enough adjectives to describe how tremendous Odell Beckham Jr. has been this season. To quote the great James Lipton (as performed by Will Ferrell), he's simply been "scrumptralescent." The Giants rookie led all receivers in yardage this week, racking up 148 yards and two touchdowns, his tenth and eleventh of the year. His teammate, Reuben Randle, was third in receiving yardage for the week, adding in 132 yards and a touchdown of his own.

The Carolina Panthers and Atlanta Falcons are both below average teams, but one of them is going to earn a playoff spot next week. Atlanta went into New Orleans and thoroughly outplayed the Saints, particularly on defense, sacking Drew Brees five times, hitting him six others, and forcing two interceptions. The Falcons eliminated the Saints from playoff contention in the process, and literally said goodbye, as Osi Umenyiora turned and waved at the trailing Saints players during a last-play-of-the-game fumble recovery for a touchdown. The Panthers, who were 3-8-1 three weeks ago, rode a sturdy performance from Cam Newton and a very solid effort from a defense who didn't let Johnny Manziel get his first career win. The NFC South has never had a repeat champion–the Panthers have a chance to end that streak with a win next week.

Breathe easy, Cowboys fans. Your team is finally in the playoffs. And they did it in incredibly easy fashion, just spanking the Colts 42-7. Tony Romo was an outrageously efficient 18-for-20 for 218 yards and four scores, DeMarco Murray added a rushing touchdown, and the Dallas defense was pitching a shutout until Matt Hasselbeck, of all people, threw a touchdown to Zurlon Tipton with 5:24 left in the game. Dallas is going to host a playoff game for the first time in the Jason Garrett era. Can't imagine how electric that stadium is going to be.

The Wilson to Willson connection was in full force Sunday night, as the Seahawks destroyed the Cardinals, 35-6. Russell found Luke three times for 139 yards, with two of those passes going for touchdowns. Willson recorded 42% of his receiving yards and 66% of his touchdowns in this game alone. In the running game, Marshawn Lynch had the longest run of his career, a 79-yard stomp through the yard that saw him stiff arm two defenders simultaneously. It was reminiscent of his Beastquake touchdown in the playoffs against the Saints several years back, complete with the groin grab celebration into the end zone. The Seahawks are peaking at the right time and look scary right now.

Jeremy Hill fumbled for the fifth time this year, but he also added an 85-yard touchdown run immediately after Andy Dalton threw a pick-six, and finished with 147 yards on the day. As things on the field progressed from "pretty dry" to "middle of the ocean wet", Hill was a solid rock for the Bengals, picking up countless first downs. On the defensive side, Dre Kirkpatrick returned a Peyton Manning interception for a touchdown, and picked off another one with about a minute left to seal the win for Cincinnati, who's now in the playoffs for the fourth straight season. 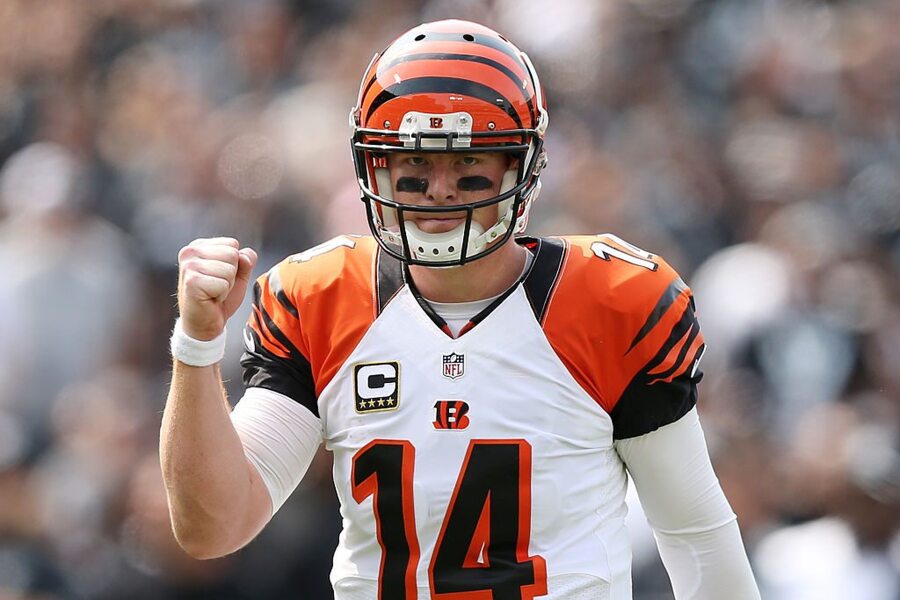 After dropping their previous two games, for the Eagles to have any realistic shot of making the postseason, they needed to win in Washington this week, then take down the suddenly surging Giants next week, plus get a little bit of luck. Instead, they made all of that anticipation disappear in dropping a game to the Washington Redskins, who hadn't won since October. Mark Sanchez threw a costly pick in the final minutes that allowed Washington to drive down the field for the game-winning field goal, but a number of receivers dropped passes, Cody Parkey missed two relatively easy kicks, and the team as a whole committed 13 penalties for 102 yards. Just terrible play down the stretch from a team who a month ago seemed like one of the best in football.

Less than a month ago, Dominic Raiola of the Lions punched one Patriots player, and flung himself at the knees of another on a kneeldown to end the game. He claimed to not be a dirty player then, but proceeded to do what dirty players tend to do: take another cheap shot. This one was at Chicago's Ego Ferguson, and Raiola quite obviously and intentionally stomped onto Ferguson's ankle after a play. The NFL has (rightfully) suspended Raiola for Week 17, which is only going to determine if the Lions win the NFC North or will have to travel for week one of the playoffs. Good timing, Dominic.

A pair of AFC teams saw their playoff hopes fly away, like a plastic bag caught in an updraft. The Ravens simply didn't show up to play–at halftime, Joe Flacco had three completions for 20 yards. Things didn't get much better, as he tossed three interceptions and was sacked twice. The running game was atrocious, too, finishing with only 28 yards on 16 carries. Baltimore is technically still in the playoff picture, though they'll need the Chargers to lose to the Chiefs in addition to beating the Browns. The Bills, meanwhile, have no hope. They went into Oakland and while they were never down by more than nine, they never really threatened, either. Buffalo pulled off a rare (though terrible) 1.0 yard per carry mark, including an abysmal four rushes for -4 yards from CJ Spiller. A promising season for the Bills, but like so many in years past, it ends in heartbreak.

Either Tampa Bay is tanking this season, or there is a level of ineptitude far greater than any #1 pick can salvage. It very well could be a combination of both.

Most Interesting Facts From Week 16

The 355 rushing yards for the Niners was the most in a loss all season. Both Frank Gore and Colin Kaepernick eclipsed 150 yards, finishing as the top two rushers for this week.

Houston has a good time hosting AFC North teams: In two home victories against the Browns and Ravens, the opposing quarterbacks have gone 41-for-100 with four interceptions.

Atlanta's 5 sacks Sunday equaled 31% of the sacks they had recorded all season coming into the game. That's 16 sacks in 14 prior games, for those of you scoring at home.

Peyton Manning threw four interceptions for just the fifth time in his career, and the first time since 2010.

Top Dogs: If you bet on and then watched the Chargers play the Niners, you probably were freaking out for the majority of the game. But even after spotting the favorite a 21-point lead, San Diego came through for the 63% of bettors who took them as 1.5-point underdogs, and the 66% who grabbed them at the ML for generally even payouts (though as high as +105 in some books). The Giants were 6.5-point underdogs, which 66% of bettors hopped on, and a whopping 77% took them at a +210 ML.

Biggest Upset: 63% of bettors took the Ravens against the spread, who opened as 3.5-point favorites and closed as 6.5-point favorites. Even more alarming was the 84% who bet the Ravens straight up, no doubt as a part of numerous failed parlays. Baltimore didn't even look competitive in a 12-point loss.

Clearly the key is to pick all 16 games–I'm on my best hot streak of the year. Although the later afternoon games and the evening games hurt me, the four games I did writeups about were on point: San Diego's wild comeback helped them cover, Minnesota lived up to their incredible M.O. of starting off a game up big before blowing it in the final seconds, and Pittsburgh held Kansas City out of the endzone while clinching a playoff spot in the process. Meanwhile, Baltimore forgot they had a game to play. But no biggie, it's not like they probably would have locked up a playoff spot with a win.

Anyway, onto our final picks for the regular season!

Neither one of these teams has anything to play for. The Patriots will probably rest their starters for the majority or all of this game, while the Bills might still let their normal guys run rampant. Or Bill Belichick will run up the score a la a college football program trying to convince the committee he belongs in the playoff. Who knows?

Minnesota has quietly covered in most of its games over the past two months, but it's also usually been the underdog in those games. Giving 'em a full touchdown over the Bears, who will be starting a newly rejuvenated Jay Cutler…I can't pull the trigger on the Vikings. Can't you just see Cutler throwing for five scores and giving an offseason full of hope to Chicago?

The Chargers just find ways to grind out games they need to win, and the Chiefs are on a big slide lately, only beating the Raiders in the last month (and also losing to them). Kansas City STILL hasn't completed a touchdown pass to a wide receiver. That lack of playmaking in the passing game hurts.

Teams that have faced Seattle this year tend to struggle mightily the following week. In case you missed it, Arizona lost to Seattle by 29 Sunday night. And that quarterback situation isn't getting any prettier. I think the Niners send Jim Harbaugh off with a big win.