If you have ever driven next to a river or perhaps down the 101 along the California coast you know how beautiful the contrast of the water and the sky can be. This type of scene was captured by German visual artist Andreas Gursky in his photograph Rhein II. Rhein II was the second installment in his six part series that depicted the Rhine River in Germany. In Rhein II, the river is shown flowing horizontally in between green fields on an overcast day. The end result was literally picturesque. So how much would you pay for a seemingly-normal photograph of a river on a hazy day? What if I also told you it was partially photo shopped??? Maybe $50? $100? One thing is for sure, you would not pay millions. Right? Apparently I am wrong. 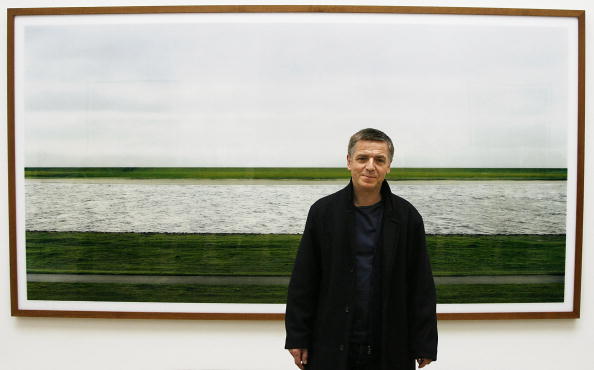 This may seem like a quite ordinary photograph but would you believe that a print once for $4.3 million? That set a record for the most money ever paid for a photograph, at the time.

The print of Gursky's photograph was first acquired by the Galerie Monika Spruth in Cologne, Germany. From there it was purchased by an anonymous German collector who sold it at auction by Christie's New York in November 2011. Estimates had the photograph earning somewhere between $2.5 and $3.5 million. The collector was delighted when it actually sold for $4,338,500. Just like the anonymous collector who sold it, the buyer's identity is unknown.

So what makes this picture worth such a ridiculous amount of money? First, the photographer edited out a factory building and dog walkers to make the scene more ideal. So yes, it is technically a photo shopped photo.  Second, he made a large color print of the photo and then mounted it onto acrylic glass and put it in a frame. The photograph is quite large, measuring 73 by 143 inches.

Gursky is no stranger to his work fetching large sums of cash. His photograph titled 99 Cent II Diptychon is the 5th highest selling photo of all time selling for $3.35 million in 2007 at Sotheby's London. In 2013 his Chicago Board of Trade III also made $2.2 million Pounds at auction.

A new record for most expensive photo ever sold was set in November 2014 when Peter Lik's Phantom sold for $6.5 million in a private sale.  The photograph was made in 2013 and shows a ghostlike figure inside of a cavern at Antelope Canyon in Arizona.

Lik is also no stranger to producing high dollar photographs. With a total of four he has had the most photos of any artist to sell for at least $1 million. At the same private sale in 2014 his print Illusion sold for $2.4 million and his photo Eternal Moods sold for another $1.1 million. In 2010 Lik's One sold for $1 million at private sale.

Maybe I should not have ditched photography class in high school after all!!!