The Dream Jet, A Luxury Apartment Inside An Airplane, Costs $74,000 An Hour

You know you're in for a smooth flight when you're being charged by the hour. CNN Money recently brought word of Deer Jet's The Dream Jet, a Chinese luxury plane that is described as "part airplane, part luxury apartment," and if you want to sample its delights the trip will set you back 500,000 Chinese Yuan (or roughly $74,000 in American dollars) per HOUR.

The Dream Jet takes its name from the fact that it's the jet of your dreams, yes, but also from its roots, inspired as it is by the 787 Dreamliner from Boeing. It's billed as a "VVIP" jetliner – or a jet for Very, Very Important People. What do you get for 74 grand an hour, other than from point A to point B? The luxury begins the moment you step on the plane, and in fact you're supposed to take off your shoes before you proceed to the foyer on your way to the "expansive sitting lounge" and the master suite.

In the sitting lounge, 19-inch-tall windows give a view of the surrounding sky, but they're competing for your eyeballs with glass sculptures by artist Dale Chihuly, as well as the prospect of a nap in the comfortable lounge chairs. Why nap in the lounge, though, when you can sleep in the master suite? 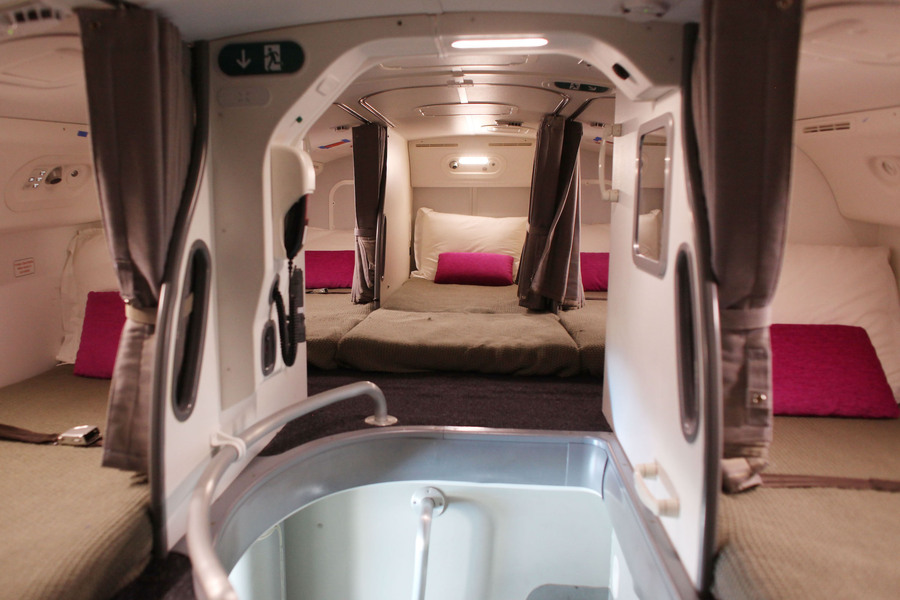 The Dream Jet's master bedroom is outfitted with a California king bed and a 42-inch television, plus a luxury bathroom complete with a shower – and 60 minutes worth of hot water. But its most impressive feature to frequent fliers might be its soundproofing, which was designed to keep the roar of air travel down to a comfortable 44 decibels, said to be "roughly the volume of a quiet suburb with light traffic." And even if you're not lucky enough to be the boss with access to the master bedroom, The Dream Jet still has room for up to 18 passengers in lie-flat business class seating in the back of the plane.

More practically, The Dream Jet has a nautical mile range of 9,800 miles, allowing it to transport passengers to and from any two cities on the planet, but right now the VVIP 787 is being used by the Waldorf-Astoria and St. Regis hotels to jet Very, Very Important Passengers from Hong Kong to destinations including Tahiti, Paris, and Rome. The plane represents an extremely difficult feat of engineering, as it's the first luxury jet of its kind. But it won't be the only one for long, since Deer Jet also announced at the tour of the plane that they'd ordered a sibling to be completed sometime in the first part of 2018.