What Is Dr. Anthony Fauci's Net Worth And Salary? And Will He Really Make Millions Off A Coronavirus Vaccine??? (Spoiler: No)

Since the start of the Coronavirus/COVID pandemic, Dr. Anthony Fauci has consistently been one of the most searched people on CelebrityNetWorth.com. However, if you searched CNW for "Anthony Fauci net worth," you would not get a result. Why? Because, frankly, I think Fauci is basically just a hard-working government doctor who never asked for this level of spotlight and truly just wants us all to not get sick and die. He's not a celebrity and in normal times he wasn't a particularly notable person. I'm only writing this article now (and might delete it once the pandemic is over) to help quash a stupid online rumor.

The rumor going around Facebook (obviously) is that Dr. Anthony Fauci stands to make millions of dollars off a Coronavirus vaccine. Actually, if you believe one particularly laughable iteration of the rumor, he could make/lose $100 million from Bill Gates as long as he recommends a Gates Foundation-produced vaccine over other potential cures/remedies like those of "hydroxychlorodrquinmedicinewoman."

Worst of all, the media apparently refuses to report on this scandal! Ok. Let's report on it.

He graduated first in his class at Cornell University Medical College and has worked at the NIH in some form since 1968 after completing his internship in internal medicine at a New York City hospital.

During his time as the head of the NIAID, Fauci has lead the governmental charge to treat diseases including HIV/AIDS, Ebola, SARS and now COVID-19.

Today, he is one of the world's leading experts on infectious diseases and is widely considered the most trustworthy doctor in America. According to the Institute for Scientific Information, between 1983 and 2003, Anthony was the 13th most-cited scientist, out of 3 million, in various medical papers, books and research. 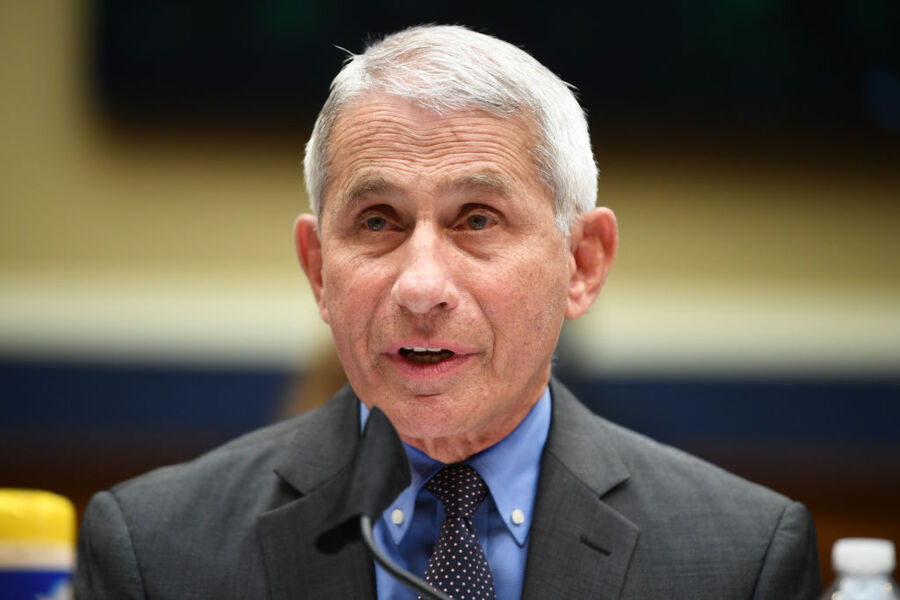 Will Dr. Fauci make $100 million off a future Coronavirus vaccine?

How about just a few million?

How about hundreds of thousands?

Dr. Fauci doesn't stand to make one cent in profit off any vaccine or remedy. This is an absolutely silly rumor that should end right now. Full stop. Period.

As a quick side note, I want to give credit to a reporter named Liz Essley Whyte for partially inspiring this article. Liz tweeted today about her experience speaking with a friend who expressed hesitation that she would take a future vaccine because she saw the aforementioned Facebook rumor about Fauci's vaccine profit connection. To prove these rumors wrong, Liz submitted a government request for Fauci's most recent Federal financial disclosure. The disclosure shows exactly what stocks and assets he owns.

You can find the full financial disclosure here.

The major takeaway from the disclosure is this: Dr. Anthony Fauci's financial investments are largely made up of bland mutual funds and money market funds that have nothing to do with the medical or vaccine industry. For example, he owns investments in the Vanguard Small Cap Index, the Schwab Government Money Fund, and the CIBC Atlas Disciplined Equity Fund.

These funds own hundreds… maybe even thousands of stocks. Fauci does not personally/directly own a single pharmaceutical or medical stock.

– He was paid $500 to attend and present the Lurie Prize for Biomedical Research in Washington D.C. in March 2019.

– The publishing company McGraw-Hill covered roughly $6,300 worth of travel expenses when he traveled to La Jolla, California in July 2019 to meet with the company's editorial board while editing a medical book.

– He earned $100,000 – $1 million in royalties for editing the previously mentioned medical book which is titled "Harrison's Principles of Internal Medicine".

When you combine his annual dividends, $400k salary salary and book royalties, Fauci likely earned over $1 million in 2019, and perhaps as much in recent years. A big chunk of his presumption depends on the actual amount he earned from McGraw-Hill and if this is an on-going gig or periodic. As you may have noticed, he gave a pretty wide range for his book royalty income, "$100,000 – $1 million".

When it's all said and done, what is Dr. Fauci's net worth? Honestly, it's very hard to say. He's definitely a multi-millionaire. If I had to peg Anthony Fauci's net worth, I would say it certainly appears to be at least in the low millions… roughly $3 million and likely less than $10 million. We would know more but unfortunately the financial disclosure does not list the value of his various investments, just the gain/loss each investment has produced and any annual dividends.

For example, his best investment is the CIBC Atlas Disciplined Equity Fund which, according to the financial disclosure, has produced a $390,644.58 gain to-date. If that's an annual gain, aka the amount the investment increased in 2019, we can do a little math to figure out the number of shares he owns and their current market value. That CIBC fund started 2019 at $18 a share and ended at $23. To have a $390,000 gain from a $5 increase in share price, Fauci would own 78,000 shares. If this assumption is true, those 78,000 shares alone are worth around $1.9 million at today's share price.

His second-best performing fund appears to be Parnassus Core Equity Fund – Institutional, ticker symbol PRILX. The financial disclosure shows a $114,000 gain in 2019. PRILX stared 2019 at $40 per share and ended at $47. Using a little math, if it's an annual gain that means Fauci owns 16,285 shares of PRILX. If that's true, this stake is worth $811,500 at today's market price.

What about the Bill Gates connection???!!!

Ahhh yes. Let's not forget about Bill gates. According to the Facebook rumor, Fauci stands to make $100 million from Bill Gates if he approves Gates' vaccine, while rejecting other potential remedies like hydroxychloroquine. Why? Because Bill Gates –  who is already the second-richest person in the world with a net worth of $120 billion – needs to trick the world into using a vaccine he funded so he can make more billions… Right.

Here are the facts:

Bill Gates, through his foundation, has pledged up to $100 million to support "the global response to the 2019 novel coronavirus." Of that $100 million, $60 million will be committed to "accelerate the discovery, development and testing of vaccines, treatments and diagnostics for 2019-nCoV" (that's the formal name of COVID-19). At no point will the Gates foundation attempt to create its own vaccine or profit off other vaccines.

Whoever ends up creating the final vaccine will not have any financial obligation to Gates or his foundation.

There are currently over 70 potential vaccines in development. Some of them have received slivers of funding from the Gates foundation. I say slivers because the money is indeed a pittance compared to the billions in funds provided by the US Government and private companies like Moderna. There is absolutely zero truth behind the idea that Gates, his foundation or Fauci will profit at all, whatsoever from the eventual vaccine.

There you have it. Can we please all go back to sharing baby photos and sunsets on Facebook?