DeAndre Jordan, star center for the Los Angeles Clippers, might have already moved on from his team's conspicuous and embarrassing playoff collapse against the Houston Rockets. He's got free agency to look forward to this summer and that means one thing for a player coming off a season in the spotlight: a maximum 5-year contract and big money.

Jordan, a fearsome rim protector, show-stopping dunker, and All Defensive 1st-teamer is a hot commodity for teams looking to shore up their interior defense. As a free agent, that means he gets to shop any offer he likes from any team that can profess to afford him this summer. With his talents he'll get the maximum contract that the league's current salary cap allows, making him somewhere north of $20 million a year. Not bad, right?

Actually, this deal may not be as sweet as it sounds. 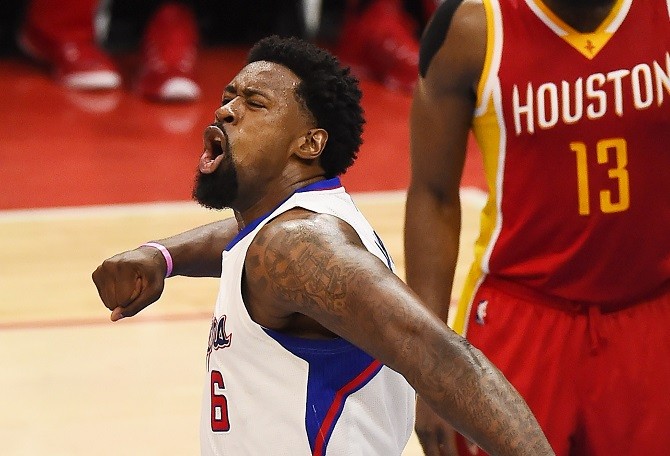 The NBA adjusts its salary cap (the amount that a team can spend on their players every year) based on projected revenue, a large portion of which is defined by league profits from television deals. According to multiple sources, 2015 TV deal revenue was placed in the neighborhood of $930 million, which in turn allowed each team about $63 million apiece to spend on their players.

A new TV deal, however, is signed, sealed, and scheduled for delivery just before free agency begins in July of 2016. The league signed a broadcasting deal that will land it a fat $24 billion over 9 years, rocketing projected revenue to about $2.7 billion per year, and increasing teams' caps to somewhere in between $80-90 million, depending on who does your calculations – $88 million according to our own Joey Held, who wrote about Lebron James' risky bet to take advantage of this cap change.

Jordan will enter the summer of 2015 able to earn 35% of a team's salary cap, or about $23 million a year. He made $11.4 million this year, so you're probably thinking, "What could he possibly be complaining about??"

Well, to be specific, he could be complaining about almost $8 million dollars a year. If projections hold, the 2016 cap will net players in Jordan's current max-level prospect position almost $31 million a year – so for a guy entering his prime looking for the best possible long-term deal he could get… yeah, it's a lot to complain about.

Unfortunately, the only way that Jordan could get himself a piece of that big ol' inflated salary cap pie is if he takes a deal that gives him a chance to opt out of his contract next year, which is exactly what Held keyed into when he wrote about King James and his sneaky-smart deal this past winter. Short-term contracts, especially for a player who is peaking right now, can be risky. If Jordan gets injured, the team carrying his contract in 2015-2016 will unload him at no cost when the contract is over, and he could be considered damaged goods.

Jordan is joined by notable big men LeMarcus Aldridge (Portland Trail Blazers) and Marc Gasol (Memphis Grizzlies) in the 2015 Free Agent class, although the NBA rumor-mill expects that Gasol will stay happy where he is while Aldridge will likely entertain offers. None of them are injury free – very few big men are. Any free agent taking the short-term who sustains an injury in the upcoming season won't just lose value on themselves, they could incentivize championship-hungry team executives to happily not re-sign an injured big man and run off to the 2016 bargaining table with even more money to spend on the next hot basketball commodity.

Staying healthy isn't even the only caveat to securing a bigger deal in 2016. Jordan will have to continue to be a freak athlete in the paint for whichever team signs him this year. A drop in defensive productivity could also leave him fetching less, especially in comparison to the other names that will come off the books in 2016: Kevin Durant and LeBron James being at the top of that list.

Ah, the perils of NBA Free Agency. If only we could all fret over making $23 million instead of $31 million. Big deal.