UPDATE: The bidding is all over with now, and even though the David Rockefeller art collection didn't quite make it past the billion-dollar threshold mentioned in the first paragraph below, it did fetch $832.6 million, which is the most ever gotten at auction for a single art collection. When all was said and done, a total of 22 artist and individual item pricing records were broken over the course of the auction, and it all started with a very auspicious first day of bidding:

Tuesday night was the first part of a three-day auction of pieces from the world famous art collection of the late David Rockefeller, and it broke, or came close to breaking, enough sale records to make even the most seasoned collector's head swim. And if the widely reported numbers from the first day are any indication, the entire auction is well on its way to cracking the $1 billion margin when all is said and done.

It only took a day for the Rockefeller collection to fetch more than $646 million and become the most valuable ever sold at auction in the process, safely surpassing the $484 million that Yves Saint Laurent and Pierre Bergé's collection got in 2009. And the sale is slated to continue both at Christie's in New York and online until May 11th. 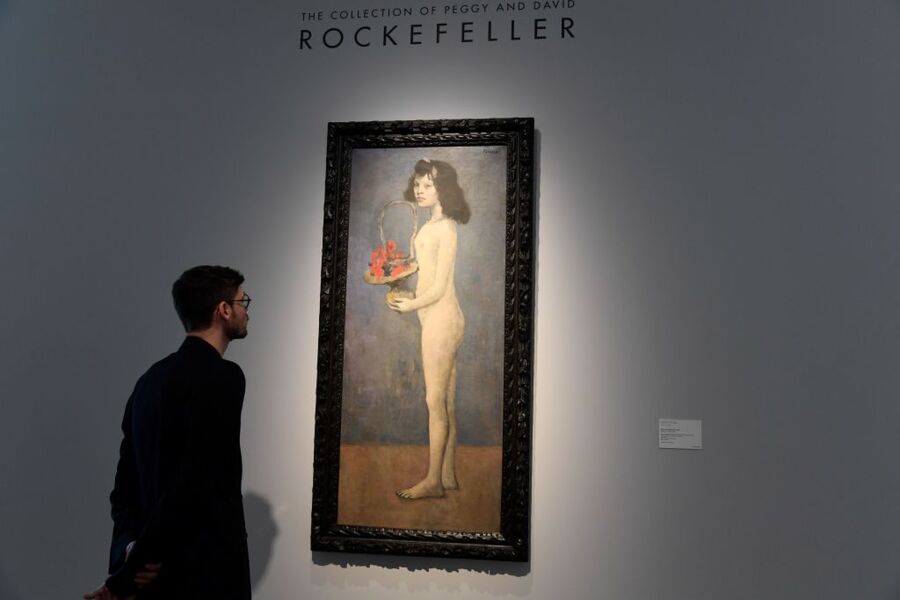 The auction's chief highlight was Fillette à la corbeille fleurie, a 1905 painting from Picasso's Rose Period, pictured above. It had a pre-sale estimate of $100 million, but like much of the collection it surpassed those expectations by a significant margin, eventually selling to an anonymous buyer for $115.1 million. That made it the second-most valuable Picasso sold at auction, right behind Les femmes d'Alger (version 'O') which got $179.3 million in 2015.

Then there's Odalisque couchée aux magnolias, a Matisse that also surpassed expectations and went for $80 million, a new sale record for the artist. Water Lilies in Bloom by Monet kept the trend going during a heated five-way exchange between bidders dueling to own the painting. The bidding quickly jumped past the painting's $50 million estimate, eventually reaching $84.7 million including fees, which also happens to be, you guessed it, an artist record. Christie's auctioneer Jussi Pylkkanen commented on the pair of record-breakers shortly after:

"To have on the same night records for two of the geniuses of painting, Matisse and Monet, is something that I never imagined would happen."

In a few days we'll know exactly how much the art collection has brought in, and the good news is that the Rockefeller family is donating all of the proceeds from the sale to 12 different charities.