How much does a cartoonist make? Cartoonists earn a good salary to excellent salary for their art skill. Cartoonists create original artwork for newspapers, publications, and online websites. 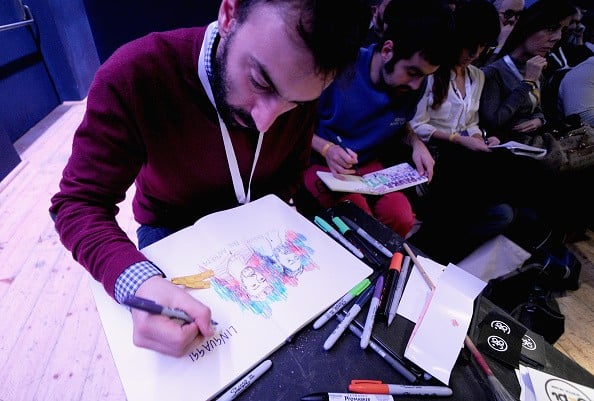 How much does a cartoonist make? Pier Marco Tacca/Getty Images

Cartoons can be drawn with pen and ink, pencil, or charcoal. Cartoonists begin their comic strip by sketching drawings in pencil, finishing the final drawings with pen and ink. Comic strips show character's thoughts above or around the characters' heads in the shape of balloons or bubbles. Some cartoons feature the words below the comic picture. Almost all visual media features cartoon art.

Cartoonists use a number of techniques when creating a single cartoon or cartoon strip. Cartoonists provide their unique style and take on a cartoon character they create, providing artwork and storyline for the comic. Comic strips require not only artwork for characters and settings, but the development of characters that appear in the comic strip. Cartoonists may use an exaggerted art style to develop interesting characters, much like animators for movies.

Cartoonists draw comic series for newspapers, advertising, social, political, and sports cartoons. Cartoonists may pair up with another cartoonist, working with someone who creates idea or storylines and write captions, while the artist draws the cartoon. Some cartoonists create all the components of the cartoon, including the artwork, idea, character development and written captions. Most cartoonists have critical, dramatic, and comic talents beyond their drawing skills.

Cartoonists communicate their ideas through a combination of pictures and words, using their work to instruct and guide, tell stories, or offer commentary on society and life. Cartoons are often used to present important issues in an easily understood form to millions of people. A good cartoonist has the ability to present an idea with minimal words and a drawing. Cartoonist drawings may feature exaggerated actions of human nature. Cartoonists may come up with original ideas, and often read and study in order to keep up with news, society and to gain fresh concepts for their work.

*Discusses ideas for comic strips with editor or publisher's representative.

*Creates and prepares sketches of characters, providing details from memory or reference material.

*Sketches and submits cartoon for approval.

*Makes changes and corrections to comic strip as necessary.

*Labels each section with designated colors when colors are used.

Employment for cartoonists is expected to grow as fast as the average. Competition will be keen for both salaried and freelance cartoonist jobs since people with creative ability and an interest in this career will exceed the number of available openings. Employers and individual clients are always seeking talented and creative artists despite the high competition in this field. Illustrators and cartoonists who work in publishing may see jobs decline as print newspapers decline in popularity. Cartoonists may choose to seek work instead in future on political Web sites and online publications.

Cartoonists generally require a bachelor's degree program or other postsecondary training in art or design to enter this field. Aproximately 60 percent of cartoonist and related workers are self-employed. Self-employed cartoonist earnings vary widely, well-established cartoonists do best in this industry.

How much does a cartoonist make per hour?

Wiki.answers.com states the average hourly wages for a cartoonist is $20.00.

How much does a cartoonist make per year?