Last year, legal cannabis brought in nearly $6 billion dollars. By the year 2026, the industry is expected to grow to around $50 billion. But despite growing support from state governments, big banks and credit-card companies have been cautious to get near an industry that is still illegal under federal law. Most merchants currently only accept cash, which is a logistical nightmare and constant security threat.

A number of BitCoin entrepreneurs are out to help the industry solve this issue. Many think BitCoin will help those who prefer not to use traditional banks. Both POSaBIT and SinglePoint Incorporated use digital cryptocurrency to help dispensaries sell their product. POSaBIT's technology is currently used by 30 dispensaries in the state of Washington.

One of the stores, Trove Cannabis, sold $3 million dollars of cannabis last year and does around 3,000 transactions per week. They became a POSaBIT customer in February after spending six months on a wait list, and now 13% of its customers are able to pay with credit or debit cards. Those customers also tend to spend a little more. 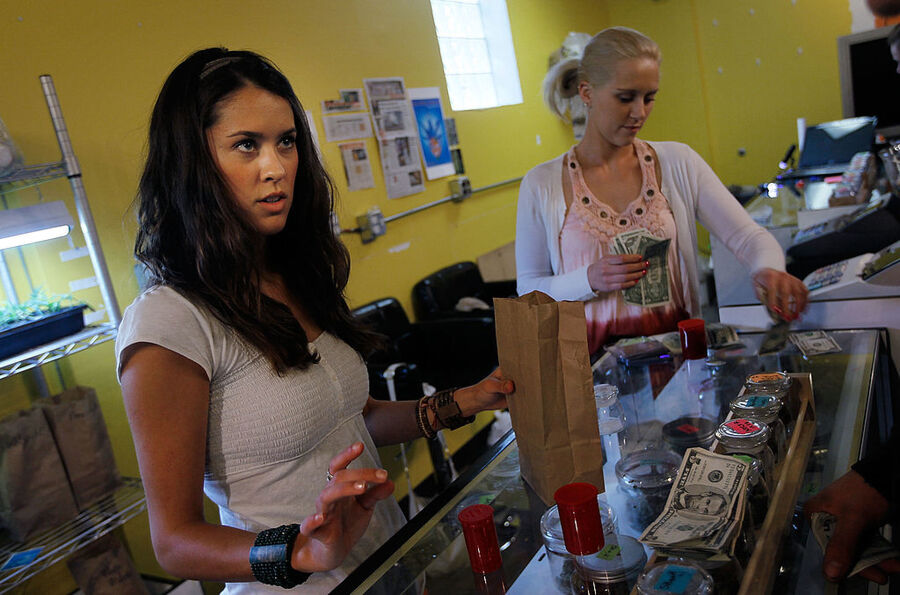 In practice, it works similar to installing an ATM in a market. POSaBIT installs a kiosk in each store that customers can use to buy bitcoin with their credit card. The customer then owns bitcoin equal to the value of the purchase and is able to redeem that currency in the store. The buyer is also able to keep their newly purchased bitcoin and use it anywhere else that accepts the currency. If they finish their purchase in the store, POSaBIT pockets a transaction fee and sends the value of the purchase to Trove's bank account.

POSaBIT complies with federal and state laws for both marijuana sales and digital currency. Customers must provide valid ID, and can acquire no more than $150 in BitCoin to prevent money laundering. It also requires that retail customers have their own bank account.

While this new solution is good in many ways for both industries, it's not without its drawbacks. BitCoin itself is often associated with illicit drug trade on the dark web and the concept of cryptocurrency is also hard to grasp for a  lot people. Many pot dispensaries would rather hold out for the traditional banking institutions.