Billionaire Of The Day: David Koch – The Younger Koch Brother

A few days ago, the Billionaire of the Day profiled on this site was George Soros, who is feared far and wide by right-leaning Americans as the shadowy puppet master behind all of their worst nightmares, so it's only fair that the other side of that equation gets the same CNW treatment. It's David Koch, the younger half of the dreaded Koch brothers, and part-owner of Koch Industries, a conglomerate valued at somewhere around $115 billion. Koch Industries is the second largest, privately held company in the United States, with tentacles in myriad industries (one brand name under the Koch umbrella that you might recognize is Dixie, as in Dixie cups), and it's growing all the time, with around $5 billion in new acquisitions in 2014 alone. David Koch joined the family business back in 1970, hired by older brother Charles.

Koch Industries is so big, in fact, that it seems to have consumed both David and Charles Koch's individuality in a way – while almost everyone has heard of the Koch brothers, those who know both of their first names are probably relatively rare (and those who know that there are actually two other Koch brothers, who in 1985 sued David and Charles over their ownership of Koch Industries, are even rarer). But David has managed to distinguish himself individually in at least one way: Philanthropy. Most of Koch's philanthropic endeavors have been under the banner of his David H. Koch Charitable Foundation, which has donated enough money to various causes over the years to make him one of the top philanthropists on Earth. Ever since his 1992 prostate cancer diagnosis, he's placed a special emphasis on cancer research, having donated a total of $41 million (so far) to the Prostate Cancer Foundation, which is only a fraction of his financial support for cancer research across the board, including a record-breaking $150 million donation to Memorial Sloan Kettering Cancer Center for a new outpatient facility. Over on the arts side of David Koch's philanthropy, there's the Lincoln Center for the Performing Arts, home to what is now called the David H. Koch Theater after a $100 million pledge to renovate the theater. 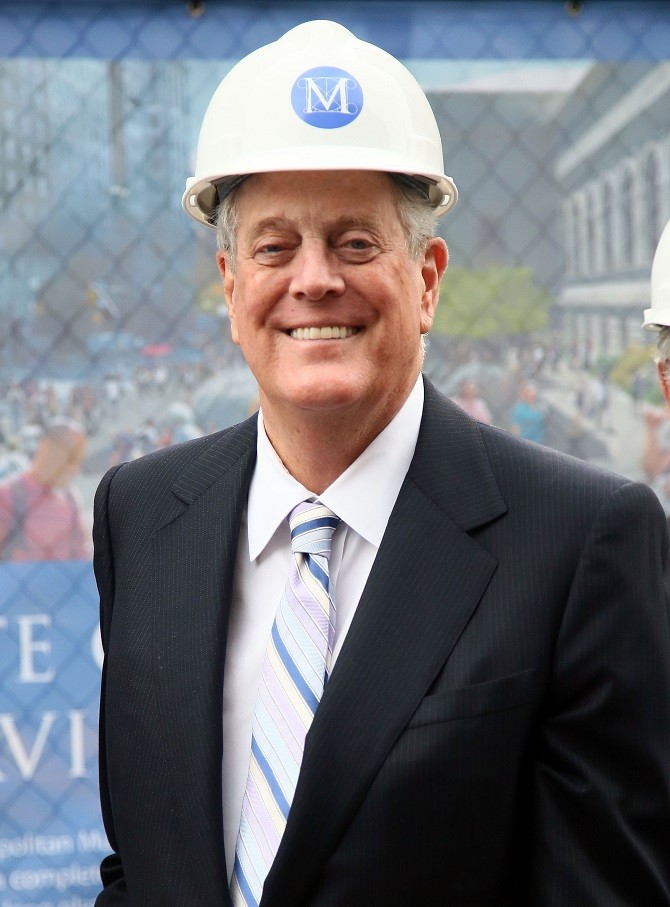 It's the Koch brothers' political contributions that are their real claim to fame, though. David Koch in particular founded the Citizens for a Sound Economy, an organization devoted to the promotion of free-market capitalism, and, as it happens, Republican political candidates. That Republican loyalty did get bucked by Dave at least once, though, when in 2014 Koch Industries made a $25 million donation to the United Negro College Fund (that came from his brother Charles' charitable foundation, however). Then there's David's support of the right to choose, stem cell research, gay marriage, and other socially liberal views that might seem to put him at odds, at least on those specific issues, with the typical Republican political candidates that the Kochs have poured so much money into getting elected.

Of course, with a net worth of more than $42 billion, David Koch can afford to give a whole bunch of his money away. David Koch has a 42% stake in the massive Koch Industries, which is the same stake that his brother has.