One possible downside of being a super-rich billionaire: When you fall off of a stage in public and almost break your neck, no one can muster up too much sympathy for you even if you're 84 years old. Frank Lowy learned this the hard way, at the 2015 A-League Grand Final in Melbourne, Australia over the weekend.

Lowy was there in his official capacity as chairman of the Football Federation of Australia, when he tripped, missed a step, and took a spectacular spill off the edge of the stage right after getting loudly booed by many of the fans in attendance. Thankfully, he wasn't seriously hurt, but if he'd been a millimeter or two off the mark he might have been seriously injured or worse. And despite what I said up at the top about a dearth of sympathy for aging billionaires, the crowd did seem genuinely concerned about Lowy's well-being, halting their boos as soon as he fell (probably because it looked so much worse than it actually was), and letting go of some big cheers when it became evident that he was OK. 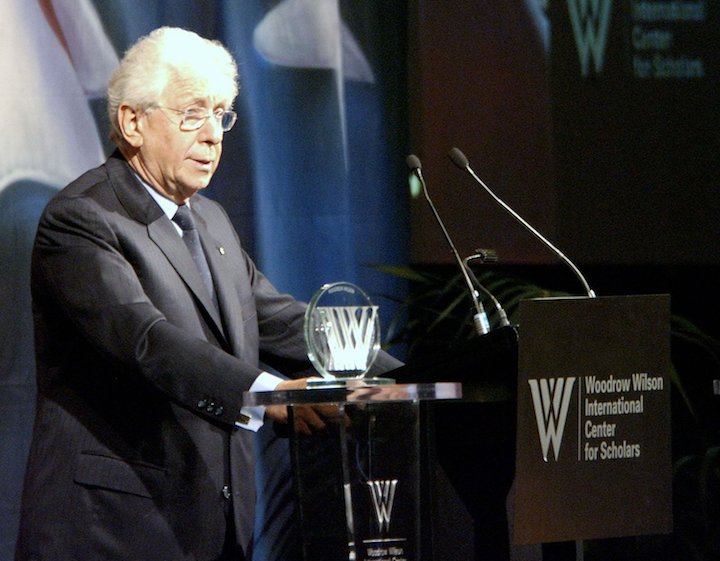 All in all, Frank Lowy's tumble from the stage only delayed the proceedings by about two minutes, and after that time had elapsed he was able to complete his original task of presenting the championship trophy to the Victory soccer team. Afterwards, he was examined by a doctor, who reported that he was fine except for some slight soreness in his shoulder – and, presumably, his pride.

Now that you know Frank Lowy wasn't hurt in his fall off the stage, you can comfortably laugh all you want. And if you still feel a little guilty, just remember that Lowy has a net worth of around $4.4 billion, and he could always buy your sympathy if he felt like it.