Chinese artist Su Shi's work dates back to the 11th century, and in some quarters he has been referred to as "the Chinese da Vinci." The artist has only two surviving scrolls to his name, and at a recent auction at Sotheby's Hong Kong one of those two scrolls, entitled Wood and Rock, sold for $59.2 million.

In point of fact, that may sound like a lot of money for a scroll, but it actually fell short of expectations some had for its value, with some speculating that the sum is further evidence of the effect of various economic and political factors on a fine art market in China that is beginning to cool down.

That may be partially due to Christie's pulling out all the stops in promoting the piece, when in press materials before the auction they referred to as "one of the most important Chinese artworks ever offered at auction." Kim Yu is the International Senior Specialist in Chinese Paintings at Christie's, and she elaborated about the work's significance:

"Wood and Rock is tremendously moving. The Northern Song was the golden era of Chinese painting, and for Su Shi the act of painting was an exploration of the self. This painting, with its relaxed and elegant charm, began an aesthetic revolution, which led to the development of later literati painting." 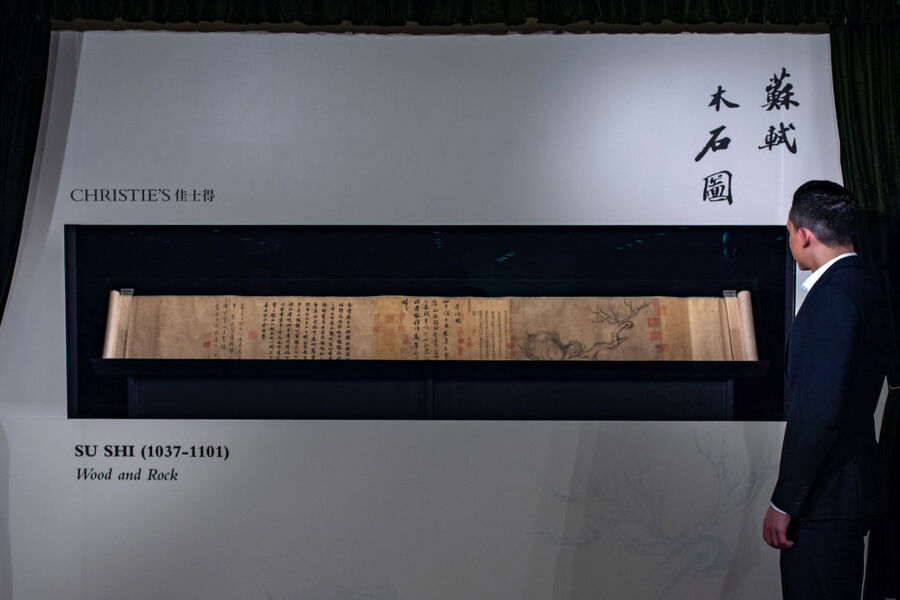 Wood and Rock's sale price of $59.2 million was an in-house record for the Sotheby's auction house, being the highest price they've gotten in Asia for a single work, and did in fact exceed its pre-sale estimate by some $8 million, but it reportedly still fell short of the record for an auction sale price on a work of Chinese painting or calligraphy.

In any event, the Wood and Rock scroll is now the property of an anonymous buyer who was one of only three bidders to put down the $20 million deposit necessary to bid on the work, a privilege symbolized by special gold paddles.