Anyone who visits Celebrity Net Worth on a semi-regular basis has probably picked up on the fact that we enjoy writing about billionaires. We hope that by reading our stories about how billionaires earn and spend their massive fortunes, maybe one day you will be inspired to make a 10 figure fortune and change the world. Along the way we have come across some pretty amazing quotes from all kinds of billionaires. If this were the 1980s, we'd probably all have cheesy motivational posters hung over our desks with some of the quotes found below. But it is 2014. So maybe you can share some of your favorite quotes on Facebook or Pinterest or Friendster or whatever social media outlet catches your fancy. From Steve Jobs to Oprah Winfrey to Bill Gates, here are 20 of our favorite motivational quotes from billionaires listed from "poorest" to richest…

"It's important to be willing to make mistakes. The worst that can happen is you become memorable."

Sara Blakely just lost her youngest self-made female billionaire crown to Elizabeth Holmes of Theranos. However, Blakely is the sole owner (and inventor) of Spanx.

"I was set free because my greatest fear had been realized, and I still had a daughter who I adored, and I had an old typewriter and a big idea. And so rock bottom became a solid foundation on which I rebuilt my life."

J.K. Rowling was turned down by 12 publishers before she found a home for "Harry Potter and the Philosopher's Stone" (Sorcerer's Stone in the U.S.)

"In life you don't get anywhere or do anything you hope to without some sort of sacrifice."

Despite his position as the CEO of a pharmaceutical corporation, Stephen Saad has had a huge influence on promoting generic medicines as an affordable option.

"What I do know is that if you do work that you love, and the work fulfills you, the rest will come." 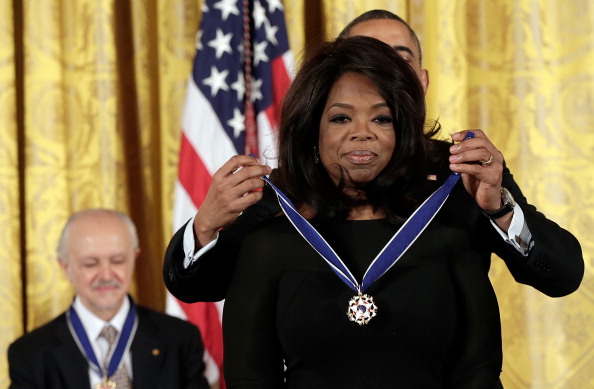 "I like thinking big. If you're going to be thinking anything, you might as well think big."

Donald Trump, despite his billions, claims to have never used an ATM.

"If you are hard working and determined you will make it, that's the bottom line. I don't believe in the easy way through."

Isabel is the daughter of the billionaire President of Angola.

"You don't learn to walk by following rules. You learn by doing and by falling over."

Branson's empire began with a mail order record business in 1970. In 2014, he announced a revolutionary new vacation policy for Virgin employees – take as much time as you want.

"The ones who are crazy enough to think they can change the world, are the ones who do."

"Everyone experiences tough times, it is a measure of your determination and dedication how you deal with them and how you can come through them."

Mittal's daughter Vanisha got married at the actual Palace of Versailles. He was the first person ever allowed to have a private function there.

"All of us, in a sense, struggle continuously all the time, because we never get what we want. The important thing which I've really learned is how do you not give up, because you never succeed in the first attempt."

Ambani and his family live in the most expensive home in the world. It cost $1 billion.

"I see this as my humanitarian legacy. We're prepared to pay billions."

Adelson is a casino magnate who owns The Venetian among other properties. He also founded COMDEX, the computer industry trade show.

"One of the huge mistakes people make is that they try to force an interest on themselves. You don't choose your passions. Your passions choose you."

Bezos spent some time working on Wall Street before he came up with the idea for Amazon a cross-country drive from New York to Seattle, writing the Amazon business plan on the way.

"Our society needs more heroes who are scientists, researchers, and engineers. We need to celebrate and reward the people who cure diseases, expand our understanding of humanity, and work to improve people's lives."

Did you know that the reason Facebook is blue is because Zuckerberg is red-green colorblind?

"Don't be afraid to assert yourself, have confidence in your abilities and don't let the bastards get you down."

When Bloomberg ran for Mayor of New York City in 2009, he spent $90 million of his own money on his campaign. This makes it the most expensive self-financed campaign in U.S. history.

"We have been doing things that are contrary; the things that people tell us won't work from the beginning. In fact, the only way to get ahead is to find errors in conventional wisdom."

Ellison owns 98% of the Hawaiian island of Lanai.

"Embrace change. Envision what could be, challenge the status quo, and drive creative destruction."

Time magazine named Charles Koch one of its most influential people of 2011 for his commitment to free-market principles, the growth and development of his business, and his support for liberty-minded organizations and political candidates.

"The life experiences which have made me grow as a human being, an entrepreneur, and a citizen are based upon a number of principles which I deem deeply valuable: Solidarity, Understanding, Commitment, Hard Work, Reliability, and Faithfulness."

Ortega has homes spread out across the world including Lisbon, London, Paris, Madrid, and Miami to name just a handful.

"It takes 20 years to build a reputation and five minutes to ruin it. If you think about that, you'll do things differently."

For a mega rich guy, Warren Buffett is pretty low key. He drives his own car everywhere. He does not have a driver or security team and has lived in the same house he bought in 1957 for $31,000.

"Live the present intensely and fully. Do not let the past burden and let the future be an incentive. Each person forges his or her own destiny."

Carlos Slim Helu is old school. He doesn't have a computer. He prefers to keep his business records in a notebook.

"It's fine to celebrate success, but it is more important to heed the lessons of failure."

Bill Gates was pretty sure he was onto something big when he was in college. He told his professors he'd be a millionaire by age 30. At 31, Gates became a billionaire for the first time.