The 15 Highest Paid Authors In The World Right Now

The annual list of the world's highest paid authors is fresh off the press. The 15 highest paid authors have put out some of the most beloved books in recent years, however, it isn't book sales alone that garnered them their multi-million dollar paychecks. Almost without exception, each of these authors also benefited from lucrative film or television deals in addition to blockbuster book sales. Basically, these 15 authors have reached an earning level and net worth that many writers never achieve. (See my personal dreams, dashed.) However, these 15 writers have also penned some of our favorite stories, created our favorite characters, birthed entire fictional worlds – and that's pretty kick ass.

George R.R. Martin is, of course, the author of the wildly popular series of books "Game of Thrones." The books were always big sellers, but the HBO series based on them gave them new life. However, "Game of Thrones" appears to have hit a saturation point with the book buying public. His five novels, which were published between 1996-2011, had reduced sales over the past year. Not to worry though, Martin is still raking in the dough. The HBO series, now in its 5th season, had its highest viewership ever, with an average of 6.88 million per episode. Martin is hard at work on the sixth novel in the "Game of Thrones" series.

E.L. James rocked to fame and fortune with her kink-fest trilogy "Fifty Shades of Grey." The first book in the series sold over 125 million copies worldwide. Badly written, the book features lines such as: "His voice is warm and husky like dark melted chocolate fudge caramel… or something." James' weirdly placed ellipses and tone deaf metaphors enraptured the world, but let's be honest, this is "Twilight" fan fiction and bad fan fiction at that. Still, the series has made James a millionaire many times over. The movie adaptation of "Fifty Shades of Grey" also struck a chord with audiences. It grossed $569.7 million worldwide. The recently released "Grey," told from BDSM fan Christian Grey's point of view is at the top of the best seller lists.

Rick Riordan is one of the two authors of children's books on this year's list. Riordan earned his $13 million last year on the back of his awesome Percy Jackson and the Olympians books. The mythology inspired series also was made into a film.

Y'all, it is Gillian Flynn's world. The rest of us just live in it. Flynn catapulted onto the 2015 list, thanks to "Gone Girl." The 2012 novel was adapted into a blockbuster film that made $368 million worldwide. Flynn also has film and television adaptations of her other two novels, "Dark Places" and "Sharp Objects" in the works.

Sales have slowed for Suzanne Collins' "Hunger Games" trilogy from its height of 27.7 million copies in 2012. However, her income is boosted from the movie adaptations of her popular Young Adult novels. "The Hunger Games: Mockingjay Part 1" grossed $752 million worldwide.

Dan Brown's earnings have fallen off since last year. In 2014, the prolific author brought home more than double this year's take: $28 million. The author of "Da Vinci Code" hasn't released a new book since "Inferno" in 2013. Luckily for him, that book continues to sell well.

John Grisham is a regular on the list of highest earning authors. The former attorney has published a novel each year since his 1988 debut. His most recent book, "Grey Mountain," sold 620,000 copies in 2014 alone. It was released in October. That is more than a half a million copies in three months.

Nora Roberts has written more than 220 novels in her career. This fact alone keeps her on the highest earning authors list year after year as new readers discover her and gobble up her books. However, her newer titles don't carry quite the weight that her older books once did. Her most recent best seller was 2014's "Shadow Spell," which sold a modest 298,600 books in the United States.

Stephen King is, of course, a veteran of the top earning authors list. He's earned over $433 million since the first time he made the Celebrity 100 list. While sales have been declining in recent years, King's creepy stories continue to sell better than many authors' offerings.

Harry Potter may be done, but that hasn't kept JK Rowling from writing. She has been writing crime fiction under than name Robert Galbraith. Under that pseudonym she's published two books, "The Cuckoo's Calling" and "The Silkworm," and has a third book, "Career of Evil" set for an autumn 2015 release.

The author of the Stephanie Plum series continues to pull in new readers and more cash. She releases one or two new novels each year, three new novels in one year, the most recent was 2014's "Top Secret Twenty-One." The latest Stephanie Plum book, "Tricky Twenty-Two," comes out in November 2015.

Jeff Kinney is the mastermind behind the wildly successful children's series "Diary of a Wimpy Kid." His most recent book "The Long Haul," sold over 1.5 million copies in the U.S. in 2014. His books also sell well outside of the U.S. and have been translated into 45 languages.

Perennial top earning author Danielle Steel lands on this list mainly due to her enormous advances. She continues to publish frequently, often putting out several books in one year. Her deep backlist also helps her bottom line. She has published 94 novels since her first in 1973.

Veronica Roth is one of four YA (Young Adult) authors on the top earners list. Roth, the author of the popular Divergent series, made $8 million more this year than she did last year. The 26-year-old author also saw a boost in sales of books when the second movie adaptation, "Insurgent," was released. "Insurgent" made $295 million at the worldwide box office. Roth also signed a new two-book deal with Harper Collins. She is the youngest author on this list. 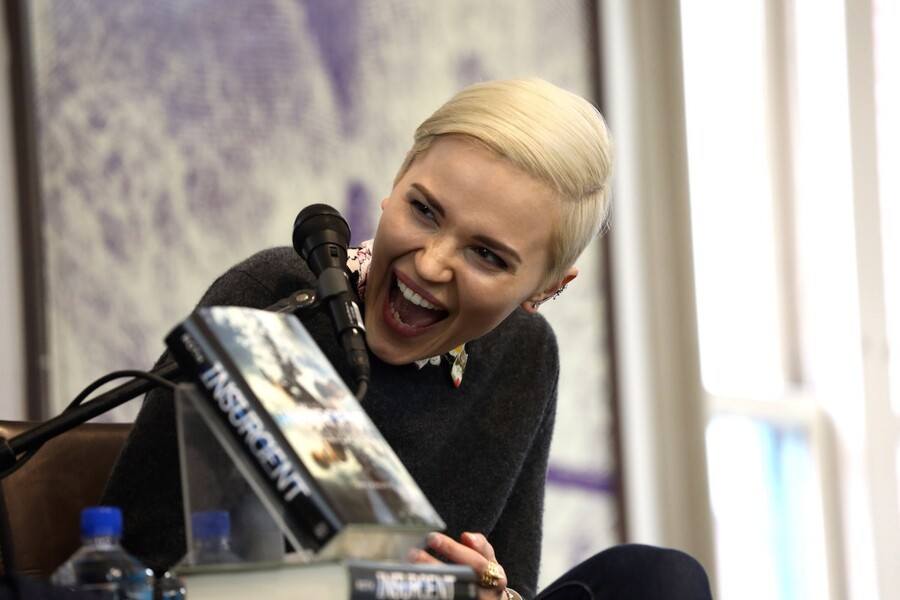 YA author John Green is the author equivalent of a rock star. His "The Fault in Our Stars" sold more than 3.5 million copies in the U.S. in 2014 alone. His third novel "Paper Towns" has been made into a much anticipated summer film starring supermodel Cara Delavigne. Last summer's blockbuster adaptation of "The Fault in Our Stars" grossed $307 million at the worldwide box office.

James Patterson continues to be the highest earning author in the world. He doesn't work alone, however. He puts out 16 books every year with the help of a staff of coauthors. In 2015, Patterson announced a children's book imprint he was launching to publish eight to 12 children's books each year. Concerned about literacy, he saw a way to help and did it. Last year Patterson donated over $1 million in grants to independent bookstores and has pledged more than $1.5 million to school libraries across the U.S.