A "hot tub" is kind of a decadent expense even under normal circumstances, but there have been certain examples throughout the history of hot tubbing that represent an ascension to another level, even by hot tub standards. Here are ten of the most expensive hot tubs ever constructed – keep dreaming, and you might be able to claim one someday, after the party's over.

The Hera is one serious top-of-the-line hot tub, equipped as it is, with LCD touchscreen controls and a shell base with high-density foam for improved heat circulation. And if you can afford to drop more than three grand on a hot tub, you shouldn't have any problem finding somebody to fill that second seat.

Hera's husband Zeus also has his own hot tub, and as befitting the King of the Gods, it's a little bit more expensive, with a price tag about a thousand dollars more expensive than the Hera's. It also has more of an emphasis on the healing power of jets, with foot massage, neck massage and 17 other "hydrotherapy jets." 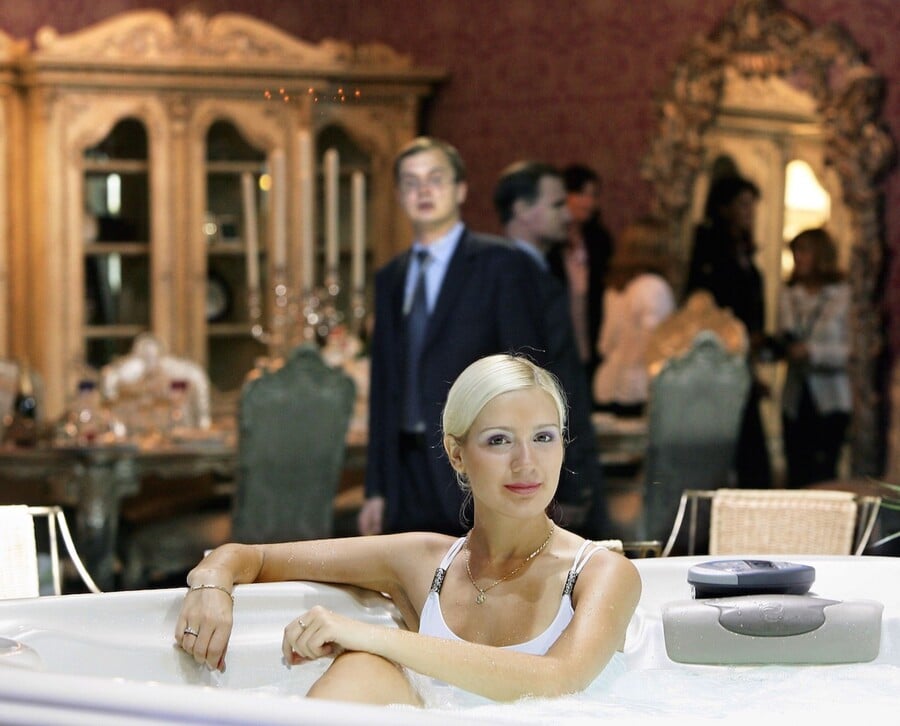 Up to seven people at a time can fit into the Escape, and while they're inside, they'll have plenty to occupy them even if they get bored with hot water and bubbles. The tub has a 15-inch TV screen and built-in DVD player, as well as an immersive aromatherapy system for people who don't like the smell of chlorine.

Looking not far off from a bathtub, you might imagine a character from 2001: A Space Odyssey relaxing in the Royal A909 Whirlpool Bathtub, which has a spaceship-sized price tag to match its space-age visual design – $12,000. It also has built-in lighting and a hands-free phone for those important business meetings that just can't wait.

As we get into the priciest of the pricy hot tubs, you should realize that customization is a big factor once you start dropping fourteen grand or more on a hot tub (as you'll have to get a Jacuzzi J-480 to call your own). This one features a custom control system that can be synced up its built-in CD player, iPod dock, temperature and lighting controls, and more.

OK, I'll give you a minute or two to get the giggles out of the way at the name "Hot Tug." Are you done? Because it refers to a tugboat, not whatever hilarious phrase you were thinking of, and this tugboat/hot tub hybrid will set you back a cool $21,000. But you can take it into almost any body of water you could take a boat, so maybe it'd be worth it.

Color-changing water fountains, more than 65 separate massage nozzles, surround sound, and a 50-inch plasma screen are just some of the features tucked away within Platinum Spa's Big Chief Jacuzzi. It fits up to five people, so you might be able to split that $25,000 asking price up a little if you play your cards right.

The Luxema 8000 is an elusive double-decker hot tub, equipped with everything from a flat screen TV to a private bar. Between its two decks it has room for a whopping 125 jets (kept going by nine different water pumps). If you're expecting to do a lot of entertaining with your hot tub, this would probably be the way to go.

Purportedly the "Rolls-Royce of hot tubs," which means you might need to hire a hot tub chauffeur just to get your money's worth. Interestingly, this hot tub might end up saving money in the long run thanks to its relatively cheap warming system, but since it costs 27 grand you'd have to use it a lot to get it to pay for itself – good luck.

Perhaps the most expensive hot tub ever, the Cal Spas Galaxy GX49 Entertainment Spa has a price tag damn close to $30,000. A retractable 40-inch plasma screen is just one of this hot tub's many technological marvels – the only thing it can't do is get you from point A to point B, which is a shame since you could buy a pretty fast car for that amount of money.