An American acting icon of Irish descent, there are few entertainers who have achieved the level of notoriety as that of Liam Neeson. You know him for his laundry list of action-packed films, but have you ever stopped to wonder how much Mr. Neeson has made from his highest-paying films? You're about to find out…

Playing the supporting role of a priest by the name of "Vallon," who is the father of Leonardo DiCaprio's character, "Amsterdam Vallon," as well as the leader of the Irish Catholic immigrant gang known as the "Dead Rabbits." Neeson's character was an intricate and vital role in the plot of this film. An epic film that can be categorized as fictionalized historical drama, Gangs of New York was directed by the legendary Martin Scorsese as was nominated for an array of awards and accolades, including "Best Picture" from the Academy Awards. Neeson received $2 million for his role in the film.

Cast as the wise old mentor to "Bruce Wayne," "Ra Al Ghul," Neeson was essentially seen as the reason Mr. Wayne assumes the identity of Batman. A small, yet clearly vital role, Neeson was paid $2 million for his work in the film.

Playing the role of the executive officer of the Soviet submarine, K-19, Neeson stars opposite fellow Hollywood icon, Harrison Ford, in this thriller film. The film received mostly positive reviews and Neeson received $3 million for his role in the film.

An action film about a former CIA agent trying to retrieve his kidnaped daughter, Taken is an action packed film that received fairly mixed reviews. Nevertheless, the movie is certainly exciting, suspenseful, and Neeson received $5 million for the role to boot. 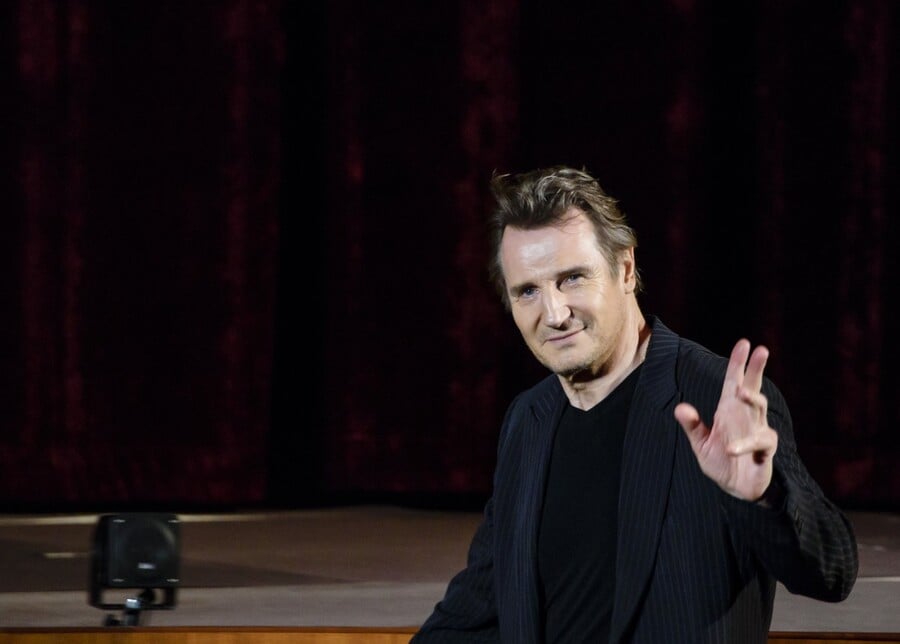 Playing the role of the almighty Greek God, "Zeus," Neeson took on this grandiose role in this remake of a heroic-fantasy-adventure film, of the same name. Receiving mostly positive reviews, it seems that fans were more than pleased and Neeson received $5 million for his larger than life role in the film.

Once again assuming the role of the great ruler "Zeus," Neeson delivered an outstanding performance and, although it was a sequel, the film still received fairly good reviews. Arguably more action-packed than the first film, Neeson's salary was also bumped up a few notches. He received $7 million for his work in the movie.

A military science fiction action movie, this film starred the likes of artist/performer Rihanna, Taylor Kitsch, and Alexander Skarsgard, to name a few. Although the movie received mostly disappointing reviews, Neeson pulled off a great performance as usual and scored $10 million in the process.

Once again taking on the role of ex-CIA agent, "Bryan Mills," this time, Neeson's character is tasked with helping one of his esteemed colleagues exact revenge for the death of his son. Although the film received lukewarm reviews and a slew of plot-related criticisms, it still did pretty well in theaters and Neeson received $15 million for his role in the film.

The last installment of a less than stellar trilogy, this film was the worst-rated of the 3 films, by far. But plot holes aside, this movie certainly brings the drama… and I'm sure the $20 million paycheck was also a selling point for the actor.

A film about a chemical-dependent U.S. Air Marshall, who is losing his zest for the job, this mystery action thriller received mixed to positive reviews. Also starring the likes of Julianne Moore, Michelle Dockery, and Lupita Nyong'o, this flick wowed fans and Neeson netted another big paycheck to boot – this time for $20 million.

An actor who has been around for several decades and still seems to be getting better with time, Neeson's legacy is already quite impressive. With a net worth of $85 million and a seemingly never ending list of past and upcoming roles, if you haven't yet favorited this actor as one of the greats, just keep watching… much like the roles he plays, these things are always subject to change…