The 10 Most Expensive Wars

War – what is it good for?  For the answer to that question, ask any company that manufactures, sells, or distributes weapons and ammunition.  They can probably give you a very large number.  War has been around almost as long as people have lived in communities.  However, as we have developed increasingly effective ways to do battle, the cost of defending ourselves from each other has risen astronomically.  Even if actual warfare does not succeed in crippling a nation, the economic toll on a country can often finish what war's devastation started.  Here is a list of the 10 Most Expensive Wars to date, and just how much money the countries involved poured into killing each other, rather than caring for their own people.

(Please note:  All numbers are adjusted to reflect their 2013 equivalent.)

Fought between 1846 and 1849, the Mexican War began when the still developing United States annexed Texas in 1845.  The U.S. went on to absorb New Mexico and California, and then overran Mexico City.  In the the cease fire agreement, Mexico had to cede Alta California and New Mexico to the US for $15 million.  They also had to pay over $3 million more in debt.

For a war that began over unfair taxation, the American Revolution ended up costing everyone a lot of money.  The war raged on for eight years, from 1775-1783, as American fought for its independence.  It ended with the Treaty of Paris in 1783, nearly six years after the U.S. had officially declared independence.

The US had managed to secure great swaths of land in the West, and now it turned to the Southeast.  For one year, from 1898-1899, the United States fought Spain for possession of Cuba.  They went on to take control of Puerto Rico, Guam, and the Philippines, as well.

The Civil War was one of the deadliest conflicts in American history, exacting a massive toll on human life.  A war between the Union and the Confederacy, the heart of the conflict was whether slavery should be abolished.  While on the surface the conflict was about freeing slaves, the real conflict was more about political control and money.  With the southern states of the Confederacy able to count each of their slaves as 1/3 of a person during elections, the South had a stranglehold on the United States political machine and the economy.  The Northern states wanted equal representation, but since slavery was less viable in cold climates, their numbers were smaller, and they couldn't get a foothold in government.  The war became a roiling mass of politics and ideology that pitted family members against each other, and the conflict can still be felt to this day.

In 1990, Saddam Hussein's Iraq invaded Kuwait.  Hussein pointed to historical data that implied that Kuwait was supposed to be part of Iran, except that the British had gotten in the way.  Major Western governments went on high alert, as Hussein now had almost total control over the Western World's oil supply.  When Saddam Hussein began threatening Saudi Arabia, the U.S. launched Operation Desert Shield.  Desert Shield was designed to keep Hussein out of Saudi Arabia.  Desert Storm, launched a little later, was designed to free Kuwait, and became one of the first wars to receive around the clock television coverage.

The U.S. joined WWI in 1917, a year before the four-year conflict ended.  The war was fought between two groups of regions/countries.  The Allies included Britain, France, the Russian Empire, Italy, Japan, and the United States.  The Central Powers included Germany, Austria-Hungary, the Ottoman Empire, and Bulgaria.  More than 70 million people fought in WWI, and it is one of the largest wars ever.

The Korean War is an example of a war being fought because of the strategic and political position of the country.  Korea has long been divided into two separate countries – North Korea, a communist nation, and South Korea, a capitalist nation.  In 1950, when the Cold War was beginning to heat up, Korea was the perfect place to have a "pissing contest".  For three years, the Soviet and Chinese-backed North Korea, played "chicken" with the United States' backed South Korea.  The two countries still get into skirmishes to this day, and the American and Chinese military presence is heavy in both countries.

The Vietnam War was a mess from start to finish.  Fought from 1965-1975, the conflict scarred millions of Americans and Vietnamese both physically and mentally.  Another war fueled by anti-Communist fervor, the United States lost terribly, and pulled out of the country just prior to being completely destroyed.  The economic cost was high, but it was nothing compared to the toll taken on the Vietnamese people, and the American veterans who returned from an awful conflict to non-existent support.

From 2001 to 2010, the U.S. engaged in a massively expensive, very intricate "witch hunt".  Dubbed the "War on Terror", the U.S. set out to hunt down the group responsible for the deadly attacks in New York and Washington, D.C.  Finding the members of the the terrorist cell, called Al Qaeda, proved difficult, and it took until 2011, before the mastermind behind the attacks, Osama bin Laden, was killed in Pakistan.  At the same time, the U.S. invaded Iraq again, moving into the country on the pretense that Iraq had created a nuclear weapon.  The conflict in Iraq waged on until 2006, and ended with the death of Saddam Hussein.  No nuclear weapons were ever found.

The United States was still recovering from the Great Depression when World War II began.  Consequently, it would be two years before the U.S. became involved.  The war began with Germany bombing Poland in 1939, and quickly escalated from there.  When the Japanese bombed Pearl Harbor, the U.S. joined the war with a vengeance.  The dropping of two atomic bombs on Japan, by the U.S., in August of 1945, not only brought the war to an end, but shifted the balance of power for the entire world.  With 85 million deaths, WWII is by far the deadliest conflict in human history, as well as the most expensive. 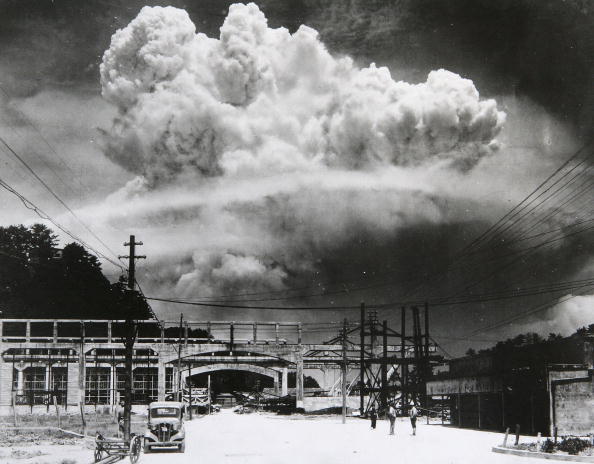 Hiromichi Matsuda/Handout from Nagasaki Atomic Bomb Museum/Getty Images
Did we make a mistake?
Submit a correction suggestion and help us fix it!
Submit a Correction