The 10 Most Expensive Tuxedos in the World

Whether the average guy wants to admit it or not, they do actually like to look good.  This is especially true on special occasions, like awards ceremonies, graduations, reunions, and most importantly –  weddings.  Though attention is more often paid to the cost of the bride's gown and the bridesmaid dresses, the tuxedos and suits worn by the groom and groomsmen can carry a hefty price tag, as well.  Depending on how the clothing is made, the reputation of the designer, and if the tuxedo has been customized or made-to-order, the cost of a looking great can set you back as much as the price of a family sedan.  Here then is the list of the most expensive tuxedos in the world.

Before becoming a darling of the fashion world, Issey Miyake was a graphic artist.  His previous vocation is apparent in the clean lines and stark styling that have become his hallmark.  He's the man responsible for dressing Steve Jobs, and his tuxedos will set you back just under 3K.

At the other end of the spectrum stylistically, if not price-wise, is New York-based designer, Jay Kos.  He's become the "go-to" designer for many up-and-coming rap and rock stars.  Kos' clothes are all about color.  In fact, black does not exist in his tuxedo line.  He has cultivated the "modern dandy" look, combining old-world styling with more modern lines.

Oxxford Clothes is not based in Oxford.  Instead, the company is headquartered in Chicago, Illinois.  They have been winning awards for their suits since the company was founded in 1916.  Forbes Magazine rated them the makers of "the best American suit".

Per Anderson revolutionized menswear in 1906, when he introduced the "London Cut", a style of suit jacket that allowed the arms of the wearer to have more freedom.  The style has been a favorite amount many notable tuxedo and suit wearers since then, including Fred Astaire, Ralph Fiennes, and Tom Ford.

No list of menswear would be complete without an appearance by Ralph Lauren.  He made his name in the world of men's fashion, and has won several awards for his work.  His suits and tuxedos exhibit his signature clean lines and subtle, but fanciful prints.

Giorgio Armani's tuxedo and suit lines are sharp, tailored, and clean.  His style is so recognizable that even the average person on the street can pick an Armani out of a lineup.  This recognition is largely due to the number of films for which he has designed costumes.

This company based in Italy may not be familiar to you unless your are into leather.  They only got into the menswear game in 2006, and none of their clothing has tags. They have their own small boutiques spread out around the world.

This Italian company has been making gorgeous tuxedos and suits since the 1930s.  It was recently absorbed into the much larger, The Kering Group, but for menswear aficionados, the Canali name still means style.

The monetary jump to a Brioni tux is sort of breathtaking.  One Brioni tuxedo costs almost double the combined price of the previous eight suits.  Known for their handmade suits, Brioni, which was launched by tailors Nazareno Fonticoli and Gaetano Savini in 1945, has approximately 25,000 customers currently.  Their $48,000 suit is made from rare Vicuna fur and stitched with white gold.  If you need something more budget-friendly, you can buy their standard suit for $6,500.

Another Italian tailor pair created the most expensive tuxedo.  Ciro Paone and Antonio Carola launched Kiton in the mid-50s, and the K50, their super high-end suit costs $50,000.  If you want a more standard handmade suit from the famed tailors, you'll need to hand over a cool $20,000. 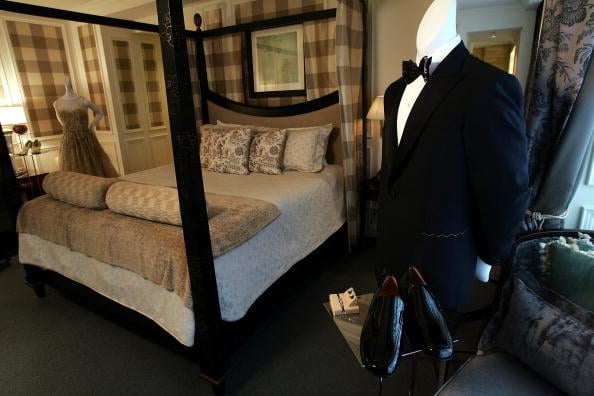 Alex Wong/Getty Images
Did we make a mistake?
Submit a correction suggestion and help us fix it!
Submit a Correction