Bret Michael's super cruise has been officially canceled. Bret's fans who were looking forward to the 4-day round-trip voyage out of Miami, with signing autographs, mingling and even guest bartending, received an cancellation notice on Tuesday. The cruise company noted the reason for the cancellation was "lack of participation" so the November cruise was canceled. Bret says that the fault is on the "less-than-reputable promoter" — who "feels he can take advantage of both artists and fans." Bret also ensures fans, "All money will be refunded to you."

Tone Loc  was arrested on June 18 in a Burbank, CA apartment complex. The charges were two felonies, one for domestic violence, and one possession of an unregistered, military-grade assault rifle. Loc pled not guilty yesterday to the charges, the weapon found was a Colt AR-15 Sporter, he is due back in court in two weeks.

Michael Irvin NFL legend says he is on a mission from God to defend homosexuality. Irvin is one of the most successful high profile athletes to speak out in favor of gay rights. Michael older brother Vaughn, who died from stomach cancer in 2006 was gay. He recently gave a pro-gay interview with Out Magazine.

Petra Ecclestone daughter of Formula 1 racing mogul Bernie Ecclestone is now the owner of Candy Spelling's 57,000 square foot mansion in Holmby Hills. Petra purchased the massive property at the steal of $85 million Candy originally wanted $150 mil for the place. The 22 year old is now all moved in, after the escrow period ended yesterday.

Sugar Shane Mosley lost more than his shirt in his recent divorce settlement, he lost 3 of his 3 championship belts. In the divorce documents Shane is to hand over 3 of his championship belts one for each minor child the couple have together. The children in return will get the belts from their mother when they turn 18. Jin will get half of Sugar Shane's cut of profits from videotapes and DVDs of his big fights and half of the couple's 854,410 American Express points.

The actor who played Macaulay Culkin's creepy neighbor and friend in the movie Home Alone" has died. Beloved actor Roberts Blossom who also appeared in movies like "Deranged", "The Great Gatsby", "Close Encounters of the Third Kind" and "Doc Hollywood" died Friday of natural causes in Santa Monica, California. In addition to his acting career — Blossom was a World War II Vet and a well-respected poet. 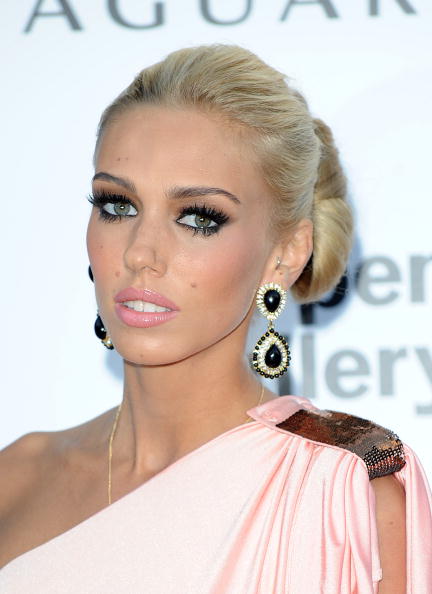 Petra Ecclestone buys Aaron Spelling's mansion for $85 mil / Stuart Wilson/Getty Images
Did we make a mistake?
Submit a correction suggestion and help us fix it!
Submit a Correction