By Amy Lamare on February 1, 2016 in Articles › Entertainment

Yoga guru Bikram Choudhury created an empire… or a cult, depending on how you look at it. His signature brand of hot yoga took the world by storm. Studios popped up all over the world. Bikram Yoga was hot with celebrities and with soccer moms. Thousands of people paid many thousands of dollars for the honor of attending his training seminars hoping to become Bikram yoga instructors. Hollywood embraced Choudhury's brand of voodoo and in turn, made Bikram Choudhury a celebrity in his own right. Business boomed throughout the 1970s, 1980s, 1990s, and 2000s and enabled Choudhury to amass a net worth of $75 million. His Los Angeles home is worth more than $15 million.

But that was then and this is now. Today, the Bikram brand is in hot water. Many studios are dropping the Bikram name in light of the accusations of rape and sexual assault that have been brought against him by former students over the past several years.

This week, Choudhury had to face the heat in court. When the verdict came in, the guru was ordered to pay a former employee $7.4 million in damages. Miki Jafa-Bodden sued Choudhury for sexual harassment, gender discrimination, and wrongful termination. She alleged that Choudhury repeatedly sexually harassed her during her time working for him. She also alleged that when she began to investigate claims that he had raped one of his students, she was fired. The jury voted unanimously in favor of Jafa-Bodden. 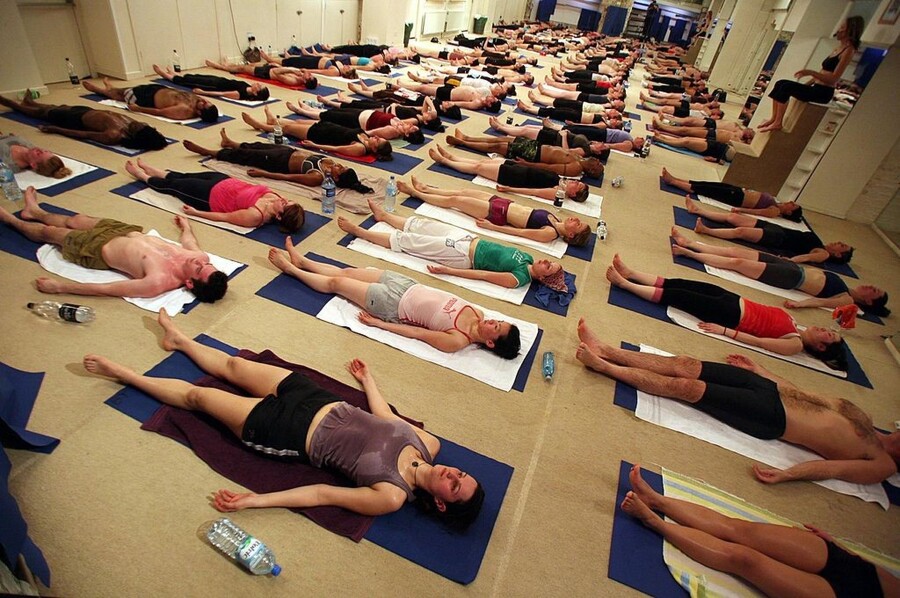 The three week courtroom battle offered a truly disturbing insight into Bikram Choudhury's empire. Jafa-Bodden said that during his twice yearly, nine week training seminars, Choudhury sat on a throne while acolytes stroked his hair, massaged his back, and fondled him beneath a towel strategically placed across his lap.

Once, she said, Choudhury urinated in front of her when she arrived at his office for a meeting. Jafa-Bodden feels that the yogi considers himself a god who can get away with anything. Choudhury, now approaching his 70th birthday, is famous for walking around in black Speedos.

Jafa-Bodden is an Indian born, English educated attorney. She first heard about Los Angeles based Bikram Choudhury in 2011 when a friend told her he was looking for an in-house lawyer. She said that becoming a part of the warped world of Bikram yoga cost her her job, her health, and to a large extent, her sanity.

She moved to Los Angeles in the spring of 2011 with her daughter Alex. They lived in an apartment that Choudhury paid for. It seemed like a great opportunity to the single mother at the time. Choudhury gave her a car and sponsored her for a work visa. It seemed like a dream job.

Jafa-Bodden's office was directly opposite Choudhury's in the headquarters of Bikram Yoga in Los Angeles. At first she was charmed by the yogi. Choudhury ruled the office with an iron fist. He played the role of a spiritual leader. Everyone was expected to obey him. Disagreement was not an option.

Jafa-Bodden soon started getting complaints from women who were devotees of Bikram yoga alleging rape and assault. Choudhury told her for "fix" the women that were saying these things about him. When Jafa-Bodden refused, her nickname became "f*cking bitch." He started licking his fingers in a sexual manner, pushing his tongue through his fingers in a suggestive manner. The supposed spiritual guru started to seem sinister to Jafa-Bodden.

Jafa-Bodden believes Choudhury brainwashes his devotees. He tells his students that Bikram is the one true form of yoga. He believes the message he is delivering and soon everyone around him does too.

However, Jafa-Bodden is no dummy, so why didn't she walk out?

It's not that easy. Remember, she is a single mom and was living in an apartment paid for by Bikram. He controlled her work visa, her phone, and her car. He threatened to have her visa revoked if she did not fall in line.

This judgment is just one of the nails in the coffin of the Bikram empire. In October 2015, he lost a court appeal to maintain the copyright on his signature sequence of 26 hatha yoga poses and two breathing exercises. He is also facing lawsuits from six women who claim the guru sexually assaulted them. The first case goes to trial in April.

The most recent lawsuit was filed by a woman who described how she signed up for a teacher training session in Las Vegas in 2010. Choudhury praised her for how easily she picked up the script of his practice. She was asked to massage him for hours while watching Bollywood films. At one point he began groping her. This was her leader, a man she idolized. She was afraid to speak up. The $10,000 for the Bikram yoga training came out of her college fund. As a result, she felt she absolutely had to finish the course. A few weeks later, Choudhury asked her to accompany him to his hotel room where he allegedly sexually assaulted her and demanded she say things including: 'Bikram you're the best' and 'I want to f–k you all night long.'" She was 18-years-old at the time.

Choudhury denies any wrongdoing. In fact, he flat out denied the allegations during an interview with CNN in 2015. He said he would never resort to forcing a woman to have sex because, frankly, women are beating down his door to have sex with him.

Choudhury also said that he feels sorry for the women accusing him of rape and sexual assault. He believes that they've been manipulated by attorneys to lie.