RIP "Grumpy Cat" :( You Wont Believe How Much Money This Feline Internet Celeb Generated During Her Life

[**UPDATE*** We are reposting this article upon hearing the news that Grump Cat tragically died today at 7 years old. RIP Grumpy Cat!]… Actors know that if they ever find themselves in a scene with a child or an animal, the audience will barely remember the adult performer. There is just something about small, cute things that makes everyone go a little bit ga-ga. It's why videos of babies sliding down the stairs, kittens sleeping on each other, and puppies sleeping on babies go almost instantly viral. We all seem to like that stuff. Nowhere is this natural inclination more apparent than with one feline superstar. Granted, she's not small. She's not particularly cute. However, she has gone viral in a big way, and become a true internet sensation. To date, she's generated over $100 million in revenue. No, that was not a typo and your eyes are not deceiving you. So just who is this four-legged entrepreneur's wet dream? Her name is Grumpy Cat.

Grumpy Cat, also known as Tarder Sauce, was born on April 4, 2012 in Morristown, Arizona. She is owned by Tabatha Bundesen, a former waitress at Red Lobster. Her distinctive expression, which earned her the nickname, Grumpy Cat, is caused by a combination of an under bite and feline dwarfism. Though her face appears to be set in a perpetual scowl, she is a sweet, calm, kind cat according to those who know her personally. Tabitha's brother, Bryan, posted a picture of the cat on Reddit in September 2012. The picture was quickly snatched up by other Reddit users, who began to add captions to the photo. Within days, the image had gone viral, and suddenly, "Grumpy Cat" captions were everywhere. From there, it was only a short walk to a veritable cat-centric empire. 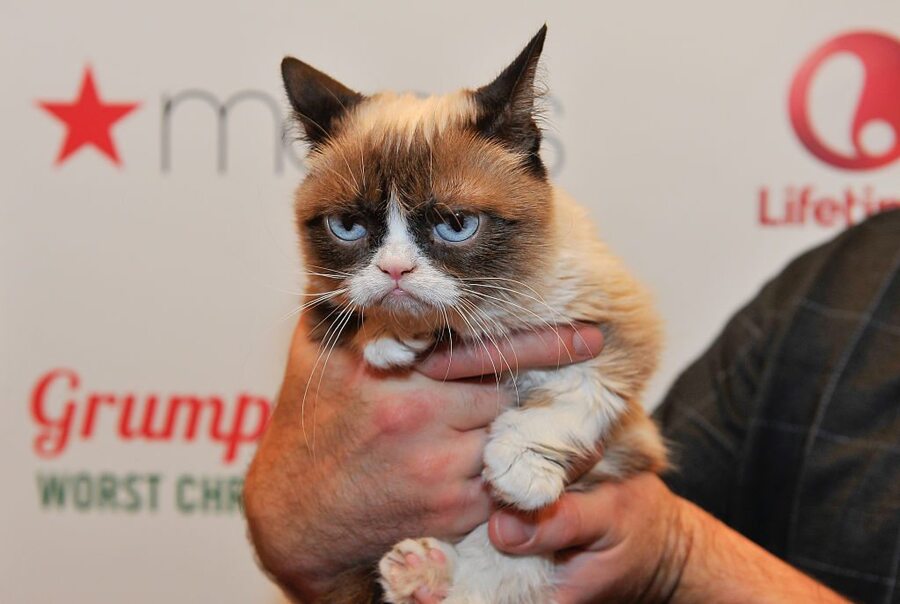 As of October 2018, "The official Grumpy Cat" Facebook page had 8.5 million "likes". Her YouTube videos have racked up 38 million views.  She has 1.5 million Twitter followers and 2.4 million Instagram followers. Grumpy Cat has appeared on the covers of multiple publications, including The Wall Street Journal and New York Magazine. She's won multiple web-based awards, including Buzzfeed's "Meme of the Year Award" in 2013, the Friskies "Lifetime Achievement Award" in 2013, and being named MSNBC's "Most Influential Cat" in 2012. She has her own manager, Ben Lashes, who is known for repping other feline celebrities, including Keyboard Cat and Nyan Cat. Her owner no longer works for Red Lobster, and instead manages her schedule. Bryan, the brother who started it all, handles Grumpy Cat's various social media accounts, including overseeing her Facebook, Twitter, and YouTube presences. All of this internet-based popularity has turned this relatively docile cat into a money-making machine.

Between products, appearances on television shows, ad appearances, book deals, and photo shoots, Grumpy Cat has become one of the most successful animal actors ever. Her image has been copyrighted, and is now licensed to appear on a range of items, including t-shirts, mugs, and tote bags. A line of stuffed animals is currently being developed. A Grumpy Cat book was published July 23, 2013. It reached #7 on the New York Times Best Seller List. The book was followed by a calendar and a second book called, "The Grumpy Guide to Life". She has appeared on a large number of talk shows, including "Today", "Good Morning America", "Big Morning Buzz Live" on VH!, "The Soup", and even made appearances on the reality competition shows, "The Bachelorette" and "American Idol". She has also popped up on the MTV Movie Awards and on QVC. She has become somewhat of a "spokescat" for Friskies, appearing on their YouTube game show, "Will Kitty Play With It?" on multiple occasions. Other endorsement and product deals include commercials for Honey Nut Cheerios and the "Grumppuccino" iced coffee line from Grenade Beverage, LLC.

The brands and ad agencies that hire Grumpy Cat roll out the red carpet for her. Ben Lashes and her owner are reportedly quite choosy with regards to what products and services she is willing to lend her face to, and they require that she be treated in the same manner as a human star. She flies first-class, sleeps in private hotels rooms, is chauffeured around in a luxury vehicle with tinted windows, and the list of perks goes on. She is not your ordinary cat. She is a $100 million brand.  She is also a brand that is about to take the next step towards media domination. After an intense bidding war and major negotiations, Grumpy Cat made the move to the small screen. November 29, 2014 marked the premiere of Grumpy Cat's first television movie. Entitled, "Grumpy Cat's Worst Christmas Ever", the film, produced by LifeTime, follows Grumpy Cat during a rough holiday season. Aubrey Plaza provides the voice of Grumpy.

How does "the Marilyn Monroe of cats" feel about all the attention? She doesn't seem to care one bit. In fact, she sleeps through most her major media appearances, and when she's not being ferried around in her specially outfitted kitty carrier, she is busy acting. well, like a kitty. Only time will tell how, or if, all the media attention is getting to her. In the meantime, her manager, and her human family, are loving the fact that the whole world has fallen in love with Grumpy Cat.