Wolf Of Wall Street Jordan Belfort Still Owes His Victims $97.5 Million. Hasn't Made A Payment To Them In Years

Jordan Belfort defrauded clients out of more than $200 million. He owes those victims $97.5 million but has only paid them less than $13 million in the 10 years since he got out of prison, despite the money he made for his memoir, the film adaptation of it, starring Leonardo DiCaprio, and the $9 million he earned from speaking engagements from 2013-2015. Where's the money, Belfort?

Judge Ann Donnelly informed Belfort's attorney that he needed to set up a payment schedule for the money he has failed to pay into the victims' fund. At the time of the hearing, Belfort was in Lithuania giving a paid speech. After the hearing, Belfort posted on Twitter:

"Always keep in mind when pushing boundaries to control your downside risk so you'll always have enough in reserve to produce your own million dollar product."

It seems that Belfort didn't lose any of the hubris that landed him in prison in the first place. The judge appears to have agreed. She said:

"Sorry to interrupt his busy schedule. He's going to have to come here so we can get a grip on what's going on." 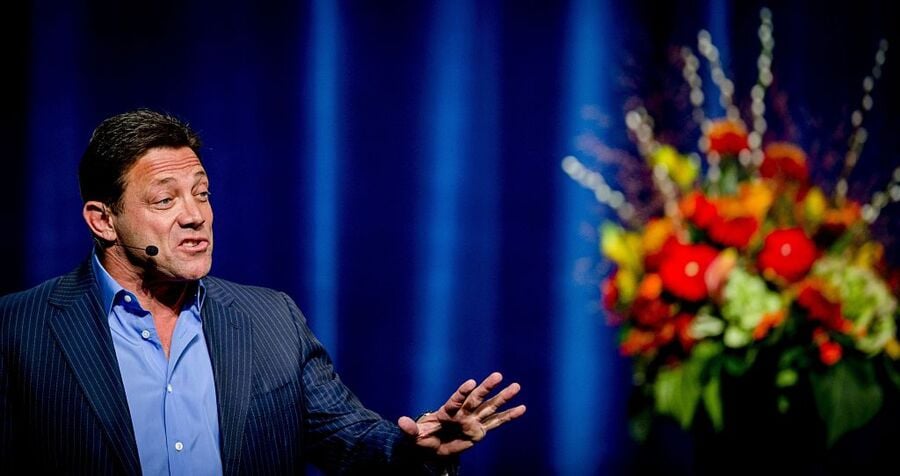 There has been a lot of drama since Belfort got out of prison, when it comes to how much of his earnings should be garnished for the victims' fund. The U.S. Attorney's office amped up their efforts to garnish Belfort's earnings last year. A Writ of Continuing garnishment was issued in an attempt to seize a portion of his disposable income. Belfort paid roughly $700,000 into the fund in the three years after he was released from prison. He made no payments at all in 2010. He has paid back $12.8 million in the past 10 years. He still owes $97.5 million to the fund—which is only half the money he stole from his clients. Most of the money he has actually paid back comes from the $11 million seized at the time of his arrest by U.S. Marshalls. So, basically, he has paid back almost nothing personally.

In 2014, Belfort took to Facebook to talk about how much he was paying back, writing:

Apparently, that was not the case, as a spokesperson for the U.S. Attorney for the Eastern District of New York issued a statement saying:

"The government has seen nothing to suggest that even 100 percent of Belfort's profits from his book and the movie Wolf of Wall Street would yield, in his words, 'countless millions,' much less the approximately $100 million that is still owed to the victims."

The government also had to aggressively pursue the publisher of Belfort's book and studio behind the movie to get some of the money being paid to Belfort redirected to the victims' fund.

Belfort has claimed a number of times that he has never profited from the book or the movie. He has also claimed that he has paid way more towards the restitution than he was required to do by the courts. On December 29, 2017, he wrote on Facebook:

"I am not making any royalties off the film or the books, and I am totally content with that. My income comes from new life, which is far better than my old one. For the record, I am not turning over 50% of the profits of the books and the movie, which was what the government had wanted me to do. Instead, I insisted on turning over 100% of the profits of both books and the movie, which is to say, I am not making a single dime on any of this. This should amount to countless millions of dollars and hopefully be more than enough to pay back anyone who is still out there."

Belfort made a fortune by using high pressure, deceptive tactics to sell penny stocks at inflated prices to people new to investing. After Belfort pumped the value up fraudulently, he would sell his shares before the prices crashed. As a result, he made a huge fortune in a short period of time and that put him on the radar of government watchdogs.

Belfort was arrested in 1999. He entered a guilty plea on charges of fraud and other crimes of stock market manipulation. In 2003, Belfort was sentenced to three and a half years in prison and ordered to chip away at the $110 million restitution by paying half of his future earnings to the government.

As mentioned, to date, the victim's fund has received $12.8 million, $11 million of which was seized at the time of Belfort's arrest. Meanwhile, he continues to insist he's paid all of it.

Prison didn't teach him a thing.