By Brian Warner on December 17, 2013 in Articles › Entertainment

In case you somehow hadn't heard, tonight's Mega Millions lottery jackpot is expected to top $636 million. That's exactly $20 million shy of the all-time largest lottery jackpot ever, $656 million from back in April 2012. If there is a winner tonight, he or she will walk away with a lump sum of $341 million which will still leave at least $210 million in your bank account after taxes. If there is no winner tonight, the money will keep riding until the next drawing on New Year's Eve, at which point the jackpot will be a world record setting $1 billion. That would be a nice way to start out 2014, right?

It goes without saying that winning the lottery is one of the hardest things in the world to do. The odds of picking the exact winning numbers for any lottery are astronomical. You're more likely to be killed by an asteroid from outer space. An amateur golfer is more likely to sink a hole-in-one on three consecutive par-3 holes. A 31 year old male who has never played basketball a day in his life (me) has a better chance at making it to the NBA. The point is, winning any lottery jackpot is extremely difficult, if not impossible. That's what makes the story you are about to hear so amazing. After winning a $40 million jackpot, a Canadian man named Tom Crist announced that he was donating 100% of his winnings to charity. Why would he do that? Is he insane?! Keep reading to find out. 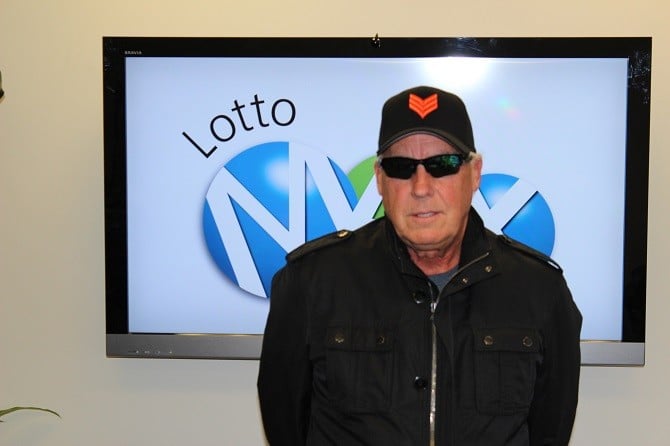 Last May, 64 year old Calgary resident Tom Crist was eating lunch in Palm Springs, California with a group of golf buddies. As they ate sandwiches in the club house and waited for their tee time, Tom's cell phone rang. The call was coming from an unknown number in western Canada. It was probably a telemarketer, but Tom picked up the phone anyway just to be safe. It was not a telemarketer. Tom was greeted on the other end of the line by an official from the Western Canada Lottery Corporation. The official informed Tom that he had just won a $40 million Lotto Max jackpot. The largest jackpot anyone from Calgary had ever won. Instead of jumping up and down and screaming his lungs out with joy, Tom quietly finished his lunch then proceeded to play 18 holes. He never mentioned the insane news any of his golf buddies.

His golf buddies weren't the only ones who were kept in the dark. Tom didn't even tell his own children until earlier this week when he shocked them with another announcement: Not only had he won $40 million in the lottery, he was going to give every cent away to charity, to honor his late wife. Tragically, Tom's wife of 33 years died last February after a long bout with cancer at the age of 57.

Tom informed his children that was planning to put the money into family charity trust. Over the next few years, the family will meet and decide which charities need or deserve the money most. In honor of his late wife, cancer charities will hold a special place in Tom's heart. At the top of his donation list are the Canadian Cancer Society and Calgary's Tom Baker Cancer Centre. The Tom Baker Center is especially close to his heart because that's where his wife was treated.

How would you feel if your dad won $40 million then gave it all away to charity? Well, before you feel too bad for his kids, it should be noted that Tom apparently did pretty well for himself in business. Before he retired, Tom was the CEO of a Calgary-based company called EECOL Electric which specializes in servicing electrical materials for wholesale customers all over Canada and South America. Tom spent 44 years at EECOL Electric and retired after the company was sold in December 2012. In his own words:

"I've been fortunate enough, through my career, 44 years with a company. I did very well for myself. I've done enough that I can look after myself, for my kids, so they can get looked after into the future. I don't really need that money."