Will The Comedy Central Roast Of Justin Bieber Save His Imploding Career And Public Image?

By Paula Wilson on March 23, 2015 in Articles › Entertainment

It's got to be tough going through your teenage years with the whole world watching. For most of us, making all those angsty teenage mistakes that everyone makes is a relatively private affair. If the average person has an ugly breakup, gets drunk at a party and pukes everywhere, or gets in a fender bender, it's not going to make the nightly news. If you're Justin Bieber, however, just the fact that you walked out of your house to get the mail is national news. It almost makes you feel bad for the guy. Emphasis on the "almost." With a net worth of $200 million, multiple cars and homes, and a dizzying number of adoring fans, Justin Bieber has a life most people would envy. Unfortunately, even at 21, he's still acting a whole lot like a teenager, and with his wads of cash and the whole world watching, he's doing some serious damage to his reputation. This week, he has the dubious honor of being the subject of a Comedy Central Roast. Roasts are generally about poking fun at the subject's foibles, but in Justin Bieber's case, making light of his recent behavior may be the only way to save his career from imploding.

Born on March, 1, 1994 in Ontario, Canada, Justin Bieber's rags-to-riches tale has been told many, many times. The child of a single teenage mom, his family struggled financially for most of his early life. He showed musical promise early on, teaching himself to play the piano, drums, guitar, and trumpet, and subsequently winning several local talent competitions. When he was 12, his mother uploaded one of his performances to YouTube for family and friends. The video caught the attention of a much wider audience, and she began uploading more videos. 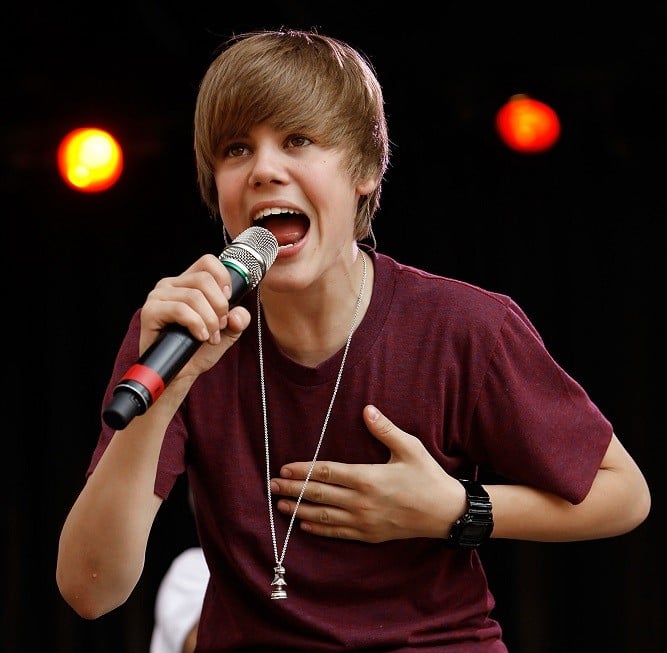 Enter Scooter Braun. A music manager and marketing executive, Braun was on the hunt for a new act, and had decided to check out YouTube to see if anyone had potential. A then 14-year-old Justin Bieber stood out. It took some convincing, but Braun finally managed to get Justin and his mother to fly to Atlanta, Georgia, where they met with Usher, an artist who had very successfully transitioned from teen star to adult hit maker. Usher was immediately interested in signing Bieber, but word had spread of Scooter Braun's teen pop prodigy, and a bidding war began between Usher's label and Justin Timberlake's label. Usher prevailed, and Justin Bieber signed with Raymond Braun Media Group and Island Records. Then began his assault on worldwide pop culture and his almost complete takeover of the airwaves.

By 2010, he was quite literally – everywhere. He released multiple chart-topping singles, appeared at the Grammys and on talk shows like "Good Morning America and "The Today Show," and released a documentary, "Justin Bieber: Never Say Never," chronicling his first world tour. The movie grossed $100 million at the box office. Hoping to follow-up on both his album and film success, he released his next studio album and world tour documentary in 2012. "Believe," the album, was less successful than his previous outing, and the same was true of the accompanying documentary. Justin Bieber was starting to grow up, as was his audience. His voice was deeper, his attitude "swaggy-er," and his sound and lyrics had gone from radio-friendly pop to a far more adult R&B-inspired sound. The change was not exactly appreciated. His popularity has declined noticeably since 2013, but he's still raking in an appreciable amount of money. He hasn't released an album since 2012, but he has appeared on a few television shows and in small parts in a couple of movies.

Since he's not focused on touring, performing, or recording, he seems to be focused almost entirely on doing, well, completely stupid things. He's reportedly surrounded by a rather massive entourage of older hanger-ons. His circle of "friends" do little to increase the common sense quotient. When his smiling mug shot hit the internet back in early 2014, the Interwebs just about imploded. Where was the squeaky clean tween-bopper from Canada? That dude was apparently long dead. In fact, if you've been paying attention, squeaky clean Bieber has been dead since early 2013, when he  started what has now become a surprisingly extensive crime spree. Here's a quick rundown:

That same month, his tour bus was pulled over when border cops found marijuana on it as it crossed from Canada to the US. The bus driver took the fall for this one, but there is still speculation as to who actually owned the pot. 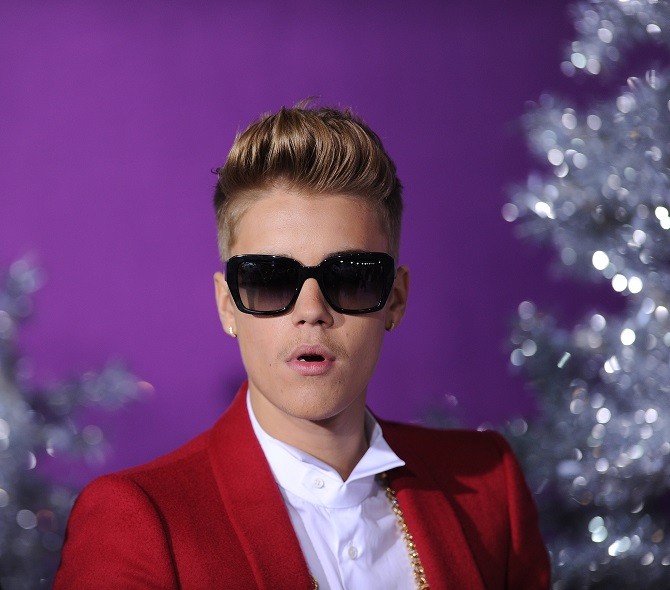 In November 2013, Bieber decided to commemorate his tour through Brazil by spray painting graffiti on the side of one of Rio de Janeiro's most famous hotels. Classy. Then his "friends" posted photos of it. Did I mention that "classy" thing? He was charged with vandalism and paid an undisclosed sum to avoid jail time in Brazil.

In December 2013, he was charged with assault after a fight broke out that involved Bieber, his "friends," and the limo driver assigned to pick them up after a night of partying in Toronto. The charges were later dropped, but it was an ugly way to close out the year.

2014 didn't start much better, however. In January 2014, while in Miami, he was arrested for drag racing, driving under the influence, and resisting arrest. After being stopped for drag racing (in a rented, bright yellow Lamborghini no less), he proceeded to tell cops that he'd been smoking weed, popping anti-depressants, and drinking all day. He then fought them when they tried to arrest him and it turned out he was driving with an expired license the whole time! Which begs the question of how he even rented the car in the first place? One of his "friends" must have helped him. His deposition video is now the stuff of legends, mostly because it clearly shows just how much he has come to believe his own hype. He comes off as a complete jerk. 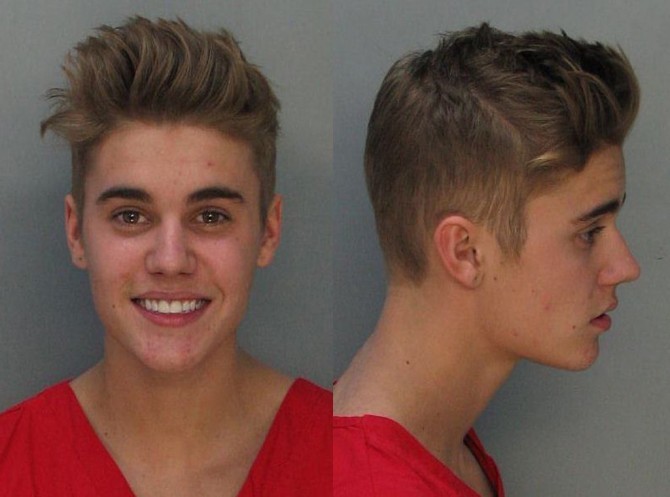 In June 2014, he was picked up for egging a neighbor's house. The egging caused extensive damage, and he was fined, put on probation for two years, and a restraining order was issued. The case has stayed with him since then. The now-former neighbors are suing him for damages, both emotional and physical, caused by the media and fan frenzy directed their way after the initial case. They also allege that Bieber and his entourage continued to harass them after egging, with Bieber spitting in one person's face and threatening to "f—ing kill" him, among other not so pleasantries.

Most recently, in August 2014 in Ontario, Bieber was arrested for dangerous driving, and for assault. He hit a minivan while driving his ATV, then got in a fistfight with the minivan driver. Didn't anyone ever teach him that it's customary to exchange phone numbers and insurance info, and to kind of leave it at that?

Interestingly, with the exception of the egging incident in which he had to pay a fine of $80,900 and attend a 12-week anger management program, Bieber has gotten off with just a slap on the wrist in every case. He hasn't served any jail time. His fines, in total, are less than what he makes in a day. No one seems to have suggested that he consider cleaning up his act, socking some of his millions away for that inevitable "rainy day" in the future, or maybe going back to school and getting a little stability. In the meantime, he's become known as "Hollywood's most annoying celebrity," and his fans are distancing themselves from him in droves. So the Comedy Central Roast comes along at a very interesting moment in his career. Historically, two kinds of celebrities are roasted. Celebrities who are at the height of their popularity and celebrities who are so ridiculous that it makes them easy targets. Justin Bieber would seem to fall into the latter category. Question is – does he know that? And will the "slap in the face" that the Roast is sure to be, be the "kick in the pants" that he needs? You can bet his managers are hoping so.