By Brian Warner on January 9, 2023 in Articles › Entertainment

When you're facing down the barrel of a trial that could result in a multi-decade prison sentence, the size of your legal defense fund is CRITICAL. For example, before his 1995 murder trial commenced, O.J. Simpson was worth around $11 million. Having a net worth of $11 million in the mid-1990s is the same as being worth around $25 million today. On top shedding all of his liquid assets to pay for the legal "Dream Team," O.J. also had to sign hundreds of thousands of dollars worth of memorabilia from jail to keep the machine churning. His lawyers famously snuck thousands upon thousands of deflated footballs into jail for him to sign. Pretty clever actually.

Incredibly, even with an $11 million fortune and hundreds of thousands of dollars worth of memorabilia income, at the end of his trial, O.J. had no money left. None. That became especially true after Simpson was ordered to pay the Goldman family $33 million in damages at his civil trial. As a result, Simpson's house and prized possessions were sold at auction. He was forced to move to Florida, a homestead state, where his NFL pension and retirement fund could be untouched by the civil or bankruptcy courts. Years later he got arrested for trying to retrieve some of his prized possessions from a collector at gunpoint in a Las Vegas casino hotel room… but that's a different story for a different day.

Ahead of his 2004 fraud and insider information trial, former Enron CEO Jeff Skilling wisely paid his legal team a $23 million retainer RIGHT before the government seized all of his assets. Had he waited just a few days, Jeff would have had ZILCH to defend himself. Unfortunately for Jeff, even a $23 million defense treasure chest wasn't enough to prevent him from being convicted and sentenced to a 24 year prison term with a $45 million fine.

If Sam Bankman-Fried had to faced these charges a year ago, his one-time net worth of $25 billion would have made any defense costs look like a speeding ticket. Unfortunately for Sam, the vast majority of that $25 billion net worth was on paper.

His former net worth, which was at one point made him one of the 50 richest people in the world, evaporated in matter of days when the house of cards that was FTX, completely collapsed in November of 2022. By early December, Sam claimed he had less than $100,000 left to his name. His parents and at least two other anonymous individuals were forced to put up their own assets to cover his $250 million bail, the largest bail in US history.

But Sam does have one financial Hail Mary up his sleeve… 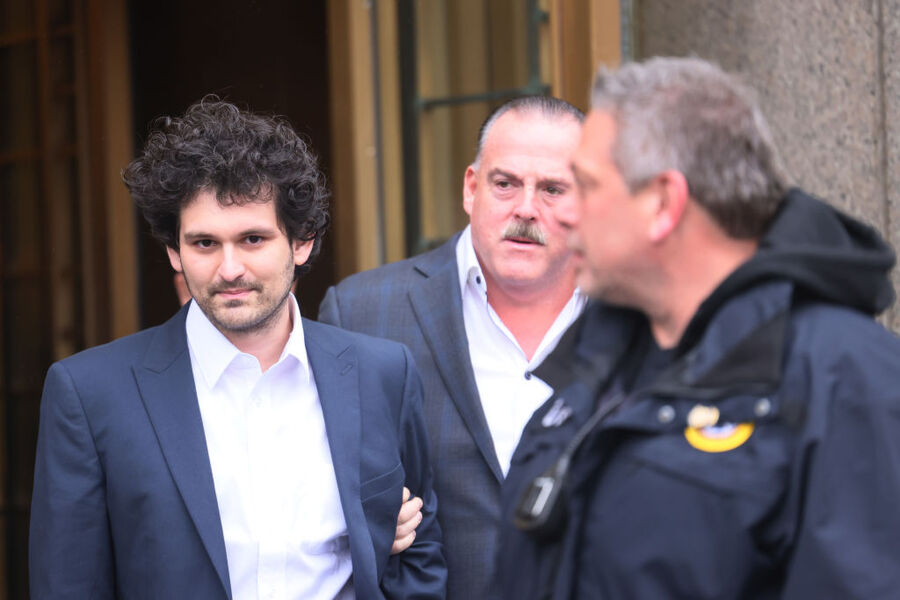 Who Owns $450 Million Worth of Robinhood Shares?

The online stock and crypto trading platform Robinhood went public in July 2021. On the day day Robinhood went public, bitcoin was trading in the $35,000 range. Two months earlier and two months later, it was in the $60,000+ range. The IPO made Robinhood co-founders Vlad Tenev and Baiju Bhatt paper billionaires with net worths of $3 billion a piece.

Fast forward a year, to May 2022, and crypto markets were in absolute turmoil. Bitcoin was back down below $30,000, on its way to $15,000, and Robinhood's stock price had fallen from an all-time high of $55 to less than $10. Vlad and Baiju, the co-founders, were no longer billionaires after the 80% drop in stock price.

On the other hand, back in May 2022, Sam Bankman-Fried was sitting pretty as one of the most well-known and respected titans in the industry. And despite the drop in crypto prices, he still sported a paper net worth of $12 billion.

So it was at this point when Sam disclosed through an SEC filing that he had quietly managed to acquire a 7.6% stake in Robinhood for $648 million.

Today that stake, which is made up of roughly 56.3 million shares, is worth around $464 million at Robinhood's current price per share of $8.25. A paper loss of $184 million, but still the present value of $464 million should be significantly more than enough to cover Sam's legal bills and potentially allow him to live an extremely rich life if he ends up being acquitted. Right?

At the end of last week US prosecutors announced that they were in the process of seizing Sam's Robinhood shares. And now a debate is raging over who/what actually purchased them, with what funds, and therefore owns them today.

One thing everyone can agree on is that Sam purchased the Robinhood stake through a company called Emergent Fidelity Technology. Neither FTX nor Alameda directly purchased the shares. However, it is also generally understood that Sam purchased the shares using $648 million worth of funds BORROWED FROM Alameda. And as it's been alleged, some of Alameda's funds came from FTX customer accounts. So if you connect the dots… do FTX's many many creditors have claim on those Robinhood shares?

To summarize the alleged events:

Sam Bankman-Fried founded three crypto firms: 1) FTX (an exchange), 2) Alameda (a hedge fund) and 3) Emergent Fidelity Technology (a totally separate personal investment fund). FTX received hundreds of millions of dollars in venture capital investment and billions of dollars in customer deposits. FTX/Sam then allegedly gave some of those billions to his sister company, Alameda Research which was run by his one-time lover Caroline Ellison. Ellison then allegedly proceeded to blow huge portions of those commingled funds on bad investments and loans… including a loan to Sam himself to buy 7.6% of Robinhood for $650 million. Along the way, in addition to taking money from FTX, Alameda also reportedly borrowed hundreds of millions of dollars from a totally separate company called BlockFi. And, according to BlockFi, Alameda used those Robinhood shares, which Sam claims to personally own and are now worth $464 million, as collateral on its loan. Sam wants everyone to believe that he personally owns the shares so he can use the money to pay for his defense. And in the meantime the Department of Justice has seized the shares while it all gets sorted out.