Which NCAA Tournament Teams Were Bet On The Most During The First Weekend?

There's nothing more exciting than the first two days of March Madness. Close games, memorable moments, and upsets abound. Well…at least that was true of Day 1 of the tournament. A record five games were decided by just one point, with 11 of the 16 contest ending with a single-digit margin of victory. On Friday, it was a different story, as all but one of the games (Dayton over Providence) ended with the better seed winning. Which games were the best for bettors? For Vegas?

First, a quick point of reference, if you're unfamiliar with the gambling world: there are two main ways to bet on games, either against the spread (ATS) or moneyline (ML). The spread refers to the point differential set by Vegas between the two teams; for example, a spread of -4 means that if you were to back the favorite, they would have to win by more than four to cover and earn you some money, whereas if you picked the underdog, they could lose by less than four or win outright–you'd win either way. ATS picks usually have the same payout for both favorites and underdogs; the norm is -110, meaning you'd pay $110 to win $100 (plus the $110 you originally bet). For moneyline picks, you're simply picking who you think is going to win. Underdogs often have much better payouts in these cases, because they usually don't win. But if an underdog is getting +300 on the moneyline, you'll win $300 if you bet $100 on them (again, plus the original $100 you bet). If you've got a nose for picking underdogs, you can do quite well for yourself. Then again, if anyone in history had a nose for picking underdogs, well, I'm sure a lot more people would be rich.

Let's take a look at a handful of games from the opening round.

It seems weird to give Villanova props, considering they lost in the Round of 32, but their 41-point shellacking over the Lafayette Leopards was more than enough to cover a 22-point spread for 58% of gamblers. A bettor loves nothing more than a game that's decided well in advance. Anything to save a few gray hairs.

Michigan State didn't make it easy, but they did pull out a win and cover at the hands of the Georgia Bulldogs. The Spartans, who closed as six-point favorites, nearly gave the game away entirely, though they ended up winning by 7, to the delight of 53% (ATS) and 66% (ML) of bettors.

The Oregon Ducks were only one-point favorites, but sometimes that can be gold for anyone betting on the game. In this case, the Ducks, who won by six, were the right pick for 68% of bettors against the spread, and 70% of straight-up bettors. 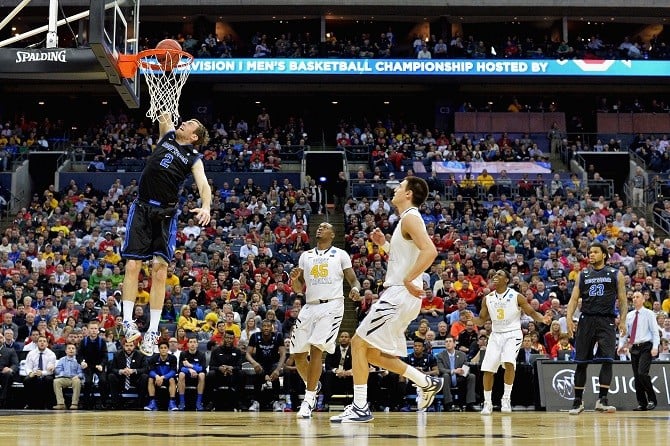 Las Vegas sure does love those 14/3 upsets, since so few people take the underdogs. Iowa State had 72% of all bets on both the moneyline and to cover a closing 14.5-point spread. They did neither, generating a nice chunk of change for those who backed UAB on the moneyline, which fluctuated between +900 and +1050. That means a $10 bet would have earned you $105. Not bad at all! Baylor was also heavily backed, though not nearly as much as Iowa State was, with 65% and 61% of ATS and ML bettors, respectively. The line only closed at -9.5, so Georgia State on the moneyline ranged from +350 to +450. Another 3/14 matchup was nearly an upset, when Notre Dame only eked out a four-point win against Northeastern. The Fighting Irish closed as 12-point favorites, failing to cover for 72% of the bettors on that game.

Elsewhere, North Carolina once again survived an early round scare, knocking off Harvard by only two points (and extending Roy Williams' career tournament first round record to an astonishing 25-0); they were also 72% ATS favorites at -10. Maryland had 66% of bettors take them as -5.5 favorites, which seems silly in retrospect, as they played 12 games that were decided by a single field goal. Naturally, they…well, played another such game, beating Valparaiso by three.

A favorite who DID cover was Georgetown, predicted by many to yet again be upset by a double-digit seed. After all, it had happened the last five times the Hoyas made the tournament. It was not to be, though: Georgetown not only beat Eastern Washington (who had 71% ATS and 73% ML action on this game), they covered the 8-point spread in winning by 10. 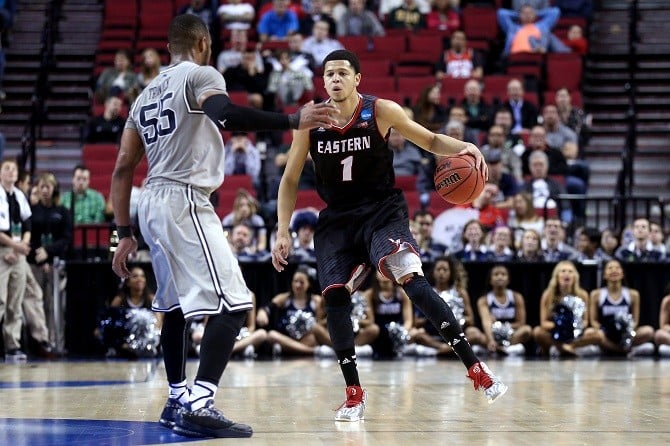 VCU got the definition of a garbage-time cover. Trailing by five with just a couple of seconds left on the clock, the Rams' Jonathan Williams made a layup, cutting the lead to three. VCU still lost, of course, but as the line closed at -3.5, they covered, and the 52% of people who backed Ohio State ATS ended up losing. Just like the real thing, the tides can turn with one shot.

In case you were curious, Kentucky's opening round win over Hampton had a spread of -35. That's the second-largest in NCAA tournament history. The Wildcats won by 23, so the 62% of bettors who backed them ATS are probably not happy. Vegas casinos also reported a few bets on Hampton to win straight up–one such bet was for $314. Had Hampton won, it would have paid out $47,100. But then again, that's asking a 16-seed to beat a 1-seed, which has never happened before. There are probably better ways to waste $314.

Highlights From The Round of 32

Villanova went from easy to cover to major upset. The first #1 seed knocked out of the tournament was a 9.5-point favorite against NC State, with 56% ATS and 70% ML bettors backing them. Instead, the Wolfpack got a 71-68 win (a great value at +450), and the Wildcats got another early trip home.

Kentucky once again didn't cover; the -16 spread was too high, as they defeated Cincinnati 63-50. Notre Dame also failed to cover, squeezing out a 3-point win against Butler when they were favored by 4.5. 70% of bettors took the ATS loss.

The Dogs Have Their Day

The first round of the tournament saw favorites go 27-5 straight up, but the underdogs certainly played them tightly. Favorites were just 12-20 against the spread. They rebounded a bit in the Round of 32, though, continuing a torrid stretch of 12-4 straight up, and 9-7 ATS. That's a grand four day total of 39-9 straight up, and 21-27 against the spread. As the Sweet 16 tips off, let's hope we see some more underdogs keeping things close. It's much more fun that way.