When Steve Jobs Died, The Majority Of His $10 Billion Net Worth Had NOTHING To Do With Apple. How? Why? Huh?!?!

We recently published an article about a little known piece of Apple history. That article told the story of how, contrary to popular belief, Apple Inc. was founded by THREE people. Most people assume Apple was co-founded by Steve Jobs and Steve Wozniak alone. But that's not true! Apple had a third co-founder, who actually provided 100% of their early funding. That mystery co-founder is named Ronald Wayne. For his services back in 1976, Ronald was given 10% of Apple's equity. So why haven't you heard of him today? Why isn't he revered in the halls of tech immortality? Because 12 days after co-founding what would eventually grow into the most valuable company in the world, Ronald made the not-so-brilliant decision to sell his entire stake back to Jobs and Woz for a grand total of $2,300.

It will likely go down as the worst business decision in history, especially when you consider the fact that his 10% stake would be worth $80 billion today. Even if Ronald had sold off 90% of his stake by now, his remaining 1% would still be worth $8 billion. And that's not even counting the hundreds of millions of dollars he would have earned from dividends and from the sale of his other shares over the years.

We're refreshing your memory about Ronald Wayne because our article inadvertently conjured up another big question related to the wealth of Apple's founders. More specifically, people wanted to know why Steve Jobs wasn't worth several hundred billion dollars at the time of his death. I mean, if Ronald Wayne could have been worth $7.3 billion with a modest 1% stake, why was Mr. Jobs "only" worth around $10 billion at the time of his death? Surely Steve Jobs owned a owned massive stake in the iconic company that has revolutionized modern life for billions of people around the world. Well, to make this even more confusing, what if I told you that at the time of his death, the majority of Steve's $10 billion fortune actually did not come from Apple at all? What went wrong? How could this possibly be true?? 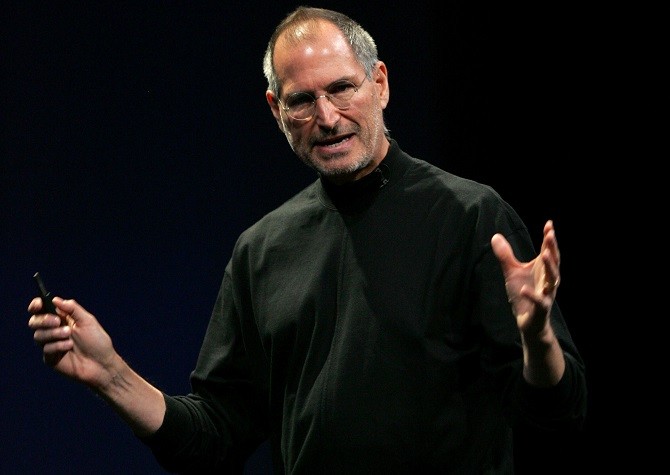 As we mentioned, Apple was founded in 1976, but it wasn't until the early 1980s when the company really started to explode in the tech world. After a slow start, by 1982 Apple's annual revenues surpassed $1 billion.

In 1983, Apple decided to hire a guy named John Sculley to be CEO. Sculley had previously served as CEO of Pepsi-Cola. He took the Apple job after Jobs pestered him with the question: "Do you want to spend the rest of your life selling sugared water, or do you want a chance to change the world?"

Jobs and Sculley got along very well at first. Together, they launched the Macintosh computer, which was introduced to the world with the now iconic Orwellian "1984" Super Bowl commercial. Unfortunately the good times between Jobs and Sculley did not last.

By this point, Steve had become extremely abrasive to both his subordinates and fellow executives. Many employees at the time described Steve as being "erratic," "temperamental," "unreasonable," and even simply, "a terrible manager."

In response to a barrage of negative Jobs-related feedback, in April 1984, Apple's board authorized Sculley to remove Steve from basically all day-to-day roles. Jobs was essentially relegated to a figurehead. Sculley actually thought Jobs would be in favor of this arrangement. He was not. Steve was furious and began secretly organizing a coup to oust Sculley from the company entirely. When Sculley learned of the coup, he successfully sought and received permission from Apple's board to take make Steve's role one with no operational function whatsoever. Steve was all but banished from working on any Apple products. 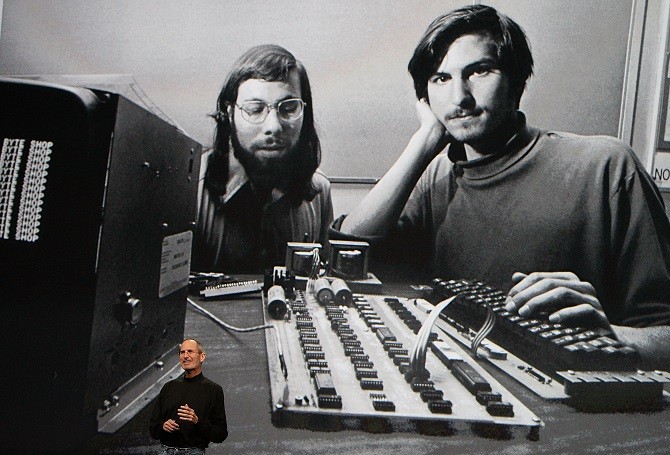 Another major problem was that Apple was in a very bad spot in 1985. Their most recent products were complete failures, and the company's stock was hitting all-time lows.

After his demotion, Steve eventually stopped coming in to work altogether. He then resigned from Apple entirely. He was not fired. He resigned. That point is often misremembered.

At the time of his resignation, Steve owned millions of shares of Apple, roughly 20% of the company's outstanding shares. At the time, Apple was trading at the split-adjusted equivalent of $5 per share.

Within days of leaving Apple, Steve angrily sold off 99.99999% of his Apple shares in one fell swoop. To be precise, he sold all but ONE share. He kept that last share only so he could continue receiving the company's annual report. In total, the sale netted him around $100 million after taxes.

After jettisoning Jobs, Apple's stock actually made a huge comeback over the next 12 months.

In that same period, Steve spent some time in Russia. He applied to fly on NASA's Space Shuttle as a civilian astronaut. He traveled around Europe and generally grappled with what to do with the rest of his life.

The NeXT Big Thing (Literally!)

Upon returning from Europe, Steve founded NeXT Inc. with $7 million of his own money. That $7 million eventually became $10 million. Then $15 million. Then $25 million. Within a year, NeXT (and Jobs) were almost completely out of money and had no product to show for their efforts. It was desperate times.

Steve navigated through these dire straights by taking on a major investment from Texas billionaire (and future Presidential candidate), Ross Perot. Mr. Perot's lifeline allowed NeXT to press forward for the next few years. By 1994, NeXT finally posted its first annual profit, $1.03 million. 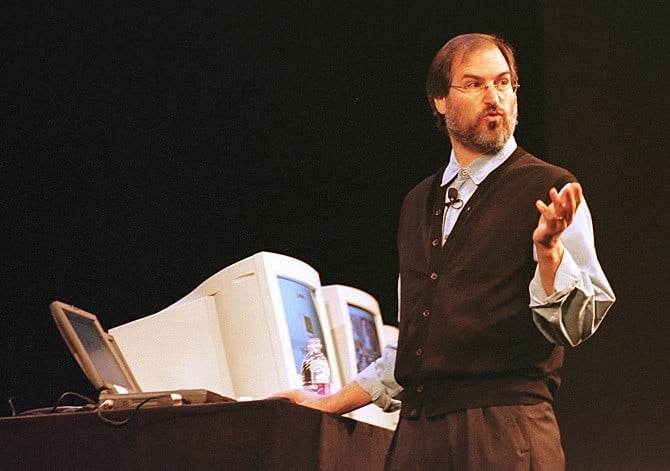 Meanwhile, Apple's stock resurgence proved to be very temporary. So much so that in 1997, a small team of senior Apple execs wanted to find a way to bring Steve back in some capacity. So what did they do? They bought NeXT for $427 million in cash.

With this acquisition, Steve became a formal advisor at Apple, but he still did not own any shares of the company!

By September 1997, Steve was named interim CEO. Over the next few years he fluctuated back and forth about how much he actually wanted to be involved at Apple. When he finally decided that he did want to come back officially, he  made a very big demand: He wanted to get PAID.

After some lengthy, and sometimes contentious, negotiations, Apple awarded Steve with 5.5 million shares of Apple. In mid-1998, those shares were worth a split-adjusted $300 million.

Back when Steve left Apple, NeXT wasn't his only investment. In 1986 he also spent $10 million of his  own money to purchase a company called The Graphics Group from George Lucas. The Graphics Group was eventually renamed Pixar. Perhaps you've heard of it?

Like NeXT, Pixar also had some tough times in the late 80s/early 90s, but they struck gold with a little 1995 movie called "Toy Story." Perhaps you've heard of it?

As you probably know by now, over the next 20 years Pixar pumped out non-stop home runs. They went on to release "A Bug's Life," "Monsters, Inc.," "Toy Story 2," "Finding Nemo," "The Incredibles." IN THAT ORDER!

Pixar IPOd on November 28, 1995. The initial offering price was $22 per share. By the end of the first day trading, Pixar was trading at $39. Steve owned 30 million shares, equal to 78% of the company. At the end of the day he was left with a net worth of $1.17 billion. This marked the first time Steve's net worth was officially worth over one billion dollars. Not bad considering that just a few years earlier he was not far away from being out of money!

Having been Pixar's distribution partner for many years, in 2006 Disney decided they wanted a more formal relationship. So they bought Steve's company for $7.4 billion in Disney stock.

The sale gave Steve 138 million shares of Disney, which had a market value at the time of $3.7 billion.

In total, Laurene Jobs currently has a net worth of $19.4 billion. That makes her the 43rd richest person in the world. She's the fifth richest woman in the world.

What Could Have Been…

Let's pretend for a moment that Steve had never resigned from Apple back in 1985. If he still owned his original 20% stake in Apple (and was alive), today he would be worth $160 billion. That's $60 billion more than his longtime rival Bill Gates. But, to be fair, there's no guarantee that Apple ever would be as valuable and revolutionary as it is today if Steve hadn't been forced into exile all those years. Also, if Steve had never resigned, there's a very good chance the world would be missing a bunch of really really amazing movies!