When Bob Hope Died Some Thought He Was A Billionaire – How Much Was He Actually Worth?

With Bob Hope's larger than life persona and popularity, it was easy to believe that the comedian and actor was massively wealthy. Based on the number of projects in which he was involved, and the breadth of his performing ability, you would think that the star of stage and screen was raking it in. When he passed away in 2003 at the age of 100, newspapers around the world trumpeted stories of his fabulous wealth. Publications estimated his personal net worth to be somewhere between $400 million and $1 billion. Truth be told, they weren't quite right. While Bob Hope was truly celebrated the world over, his bank account was rather more modest. When he began to slow down in his later years, and to prepare his estate for the day when he would no longer be living, his net worth was estimated at $115 million. This is by no means shabby of course, but it is a far cry from general estimates. Here's the story of one of the greatest performers of the 20th Century, and how his public persona hid a far more modest man.

Bob Hope was born Leslie Townes Hope in Eltham, London, England on May 29, 1903. The fifth of seven children, Bob Hope and his family members moved to the United States in 1908. They passed through Ellis Island and then moved on to Cleveland, Ohio, where the family settled down. In order to make a little extra money for his family, he began performing on the street and in streetcars, earning change singing, dancing, and telling jokes. He also competed in various talent competitions. His impersonation of Charlie Chaplin won him a prize in 1915. Throughout his teenage years, he worked as an assistant to a butcher and as a lineman. He subsequently decided that he missed performing. However, this time he wanted to earn more than a little extra money. He enrolled in dance classes with his girlfriend, and they developed an act that soon had them earning $8 per night. After they had to retire their act (her mother did not like it), he joined forces with fellow student, Lloyd Durbin. Their performances caught the attention of Fatty Arbuckle, the famed silent film comedian. He recommended them for the Hurley's Jolly Follies, a touring vaudeville company. From there, he went on to form his own touring act called the "Dancemedians." Hope toured for a number of years with George Byrne and a pair of conjoined twins who tap danced, known as the Hilton Sisters. He also performed a "siamese twin" act with Byrne in blackface, but the act was quickly retired because it wasn't as funny as Hope's stand-up work. 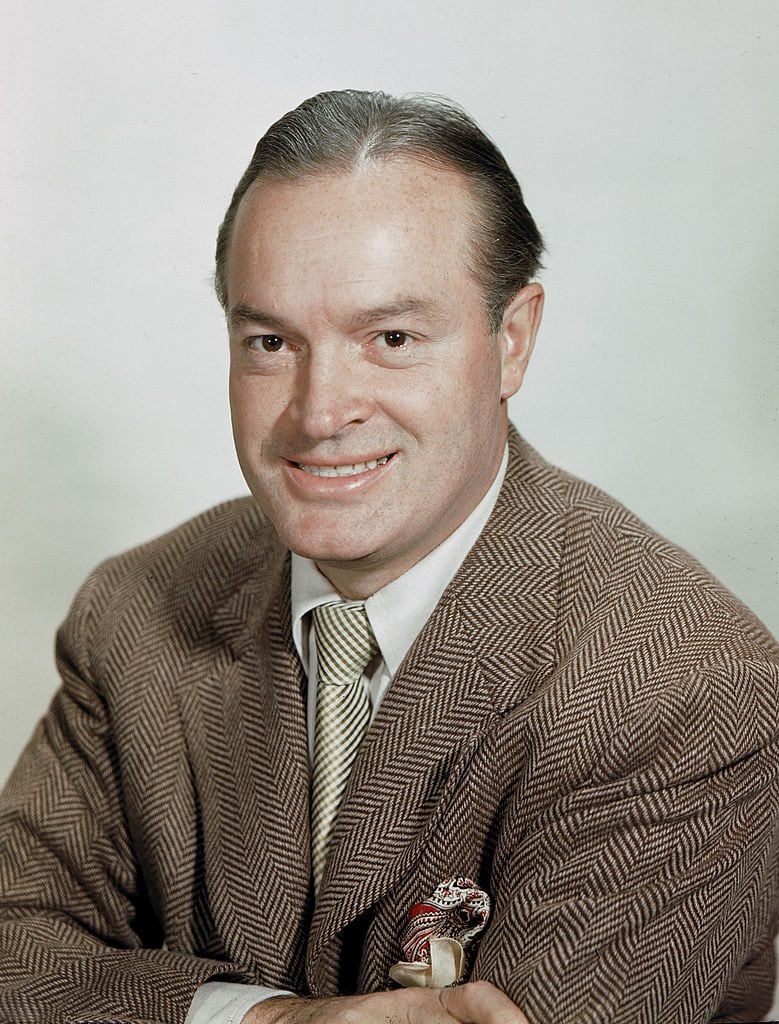 Hope's vaudeville career subsequently led to work on Broadway, when he and Byrne were cast in the Broadway show, "Sidewalks of New York," starring Ruby Keeler. At the urging of their agent, they began to work their way west from New York. Along the way, Bob Hope began announcing the coming attractions at each theater where they performed. Audiences ate up his pre-show schtick, and by the time they reached Pennsylvania, Bob Hope had become a solo act. He attempted to launch a screen career in Los Angeles in 1930 without luck, so he headed back to the East Coast, where he continued to work on Broadway. Between 1932 and 1936, he appeared in such Broadway productions as "Ballyhoo," "Roberta," "Say When," "Zeigfeld Follies," and "Red, Hot, and Blue." He also began appearing in short comedies for the company Educational Pictures.

In 1934, he started working in radio, as well. By 1937, he had signed a contract with NBC Radio, hosting the "Woodbury Soap Hour." It was a 26-week contract that led to his signing of a 10-year contract to host the "Pepsodent Show Starring Bob Hope." He was making $2,500 per week hosting the show, and he paid his eight member writing team and staff out of his own salary. As the radio program's popularity grew, so did Hope's staff, eventually leveling out at 15. 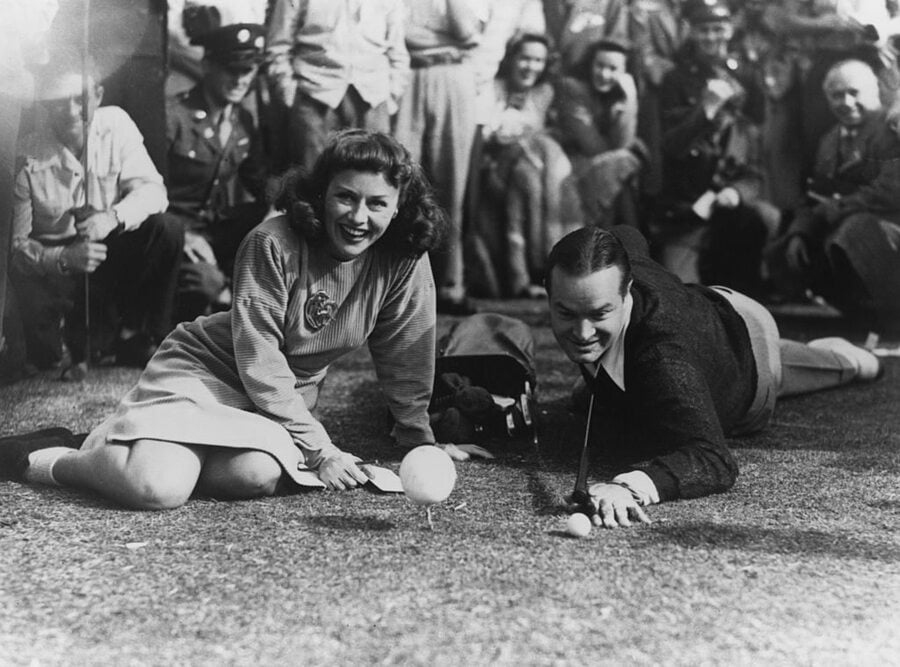 His radio work, combined with his success on Broadway, and the popularity of his comedic shorts, finally caught the attention of Hollywood. He was invited out west by Paramount Pictures, where he signed a contract and launched his film career with a role in "The Big Broadcast of 1938." The film featured the song that would become known as his signature number, "Thanks for the Memory." It was only up from there. He went on to appear in over 70 films, receiving numerous honors and awards, including the Jean Hersholt Humanitarian Award and four honorary Oscars. He hosted the Oscars a record 14 times, and his Christmas specials for NBC were watched by more than 60% of the nation each year. He also tirelessly performed for US troops, touring as a member of the USO from 1941 to 1991. He received the Congressional Gold Medal, the Presidential Medal of Freedom, the National Medal of the Arts, and was made an honorary member of the US Armed Forces by an act of Congress in 1997.

Along the way, Hope invested portions of his salary in real estate, which sowed the seeds of the legend of his great wealth. In 1967, Time Magazine published what was thought to be a factual account of his real estate holdings. The article stated that he owned "8,000 acres in Palm Springs, 4,000 to 5,000 acres near Phoenix, more than 7,500 acres in Malibu," and their list went on. In fact, they believed his holdings were 50 times the size of Monaco. Forbes Magazine was a bit more cautious, estimating that Hope's assets were closer to $200 million, and they added him to their Forbes 400 list in 1983. Hope was nonplussed. In fact, in true Bob Hope style, he wrote, "If my estate is worth over $50 million, I'll kiss your ass. I mean that." A Forbes reporter, Richard Behar, was determined to find out just how much land Bob Hope actually owned. After exhaustive research, he could only come up with 8,600 acres. The majority of those acres weren't even developed and were in a canyon. As Hope aged, he began liquidating his land holdings. At the time of his death, the value of the property that was left and that of his investment funds, turned out to be closer to $115 million. He owned a home designed by John Lautner which was constructed to look like a volcano. Located in Palm Springs, the property was placed on the market ten years after his death with a price tag of $50 million. The year before, his other property, an 15,000 square foot home in Toluca Lake, was also put up for sale.

Bob Hope's 80-year career earned him millions of fans around the world, but other than his charitable golf tournaments, his small stake in the Cleveland Indians baseball team, and donations to his own charitable organizations, including the Bob Hope Fight for Sight Fund, he lived a rather frugal life by Hollywood standards. (Though apparently he did have a penchant for keeping mistresses.) When he passed away from pneumonia in 2003, newspapers around the world featured cartoons of the performer. He may not have been the richest of Hollywood's legendary performers, but many say that he was one of the most influential. Nancy Reagan called him, "America's most honored citizen and our favorite clown." At the end of the day, for a performer, a legacy like that is a whole lot more satisfying than a bulging portfolio.