What's The Most Valuable Legal Tender Coin In The World? Prepare To Be Amazed!

By Amy Lamare on December 22, 2014 in Articles › Entertainment

In America, we don't like coins. We use them all the time, but not nearly as much as basically every other country in the world. For decades the US Mint has been trying to get us to stop using paper dollars (in favor of a dollar coin) without a modicum of success. Part of the problem is that American men have traditionally refused to buy wallets that have an area for holding coins, because it makes us feel like we're carrying a purse. But maybe all that would change if coins were simply more valuable. A lot more valuable. So, which country has the most valuable legal-tender coin? And how much is it worth?

Here's how this coin came to be: In light of a downturn in the market for precious metal coins, in 2012 an Australian mint took matters into its own hands and produced a coin that can truly only be called behemoth. The Perth Mint took a look at the continued volatility of the market for their wares and considered it a challenge. The staff at Australia's oldest producer of precious metal coins decided to set out to break all records. In the process they also took home a Guinness World Record.

The mint went ahead and produced a one metric ton gold coin decorated with a red Kangaroo. It is the world's largest coin, as certified by the experts at the Guinness World Records. The coin is cast from 99.99 pure gold that was extracted from Australian mines. It weighs 2,204 pounds and is 31 inches wide and 5 inches deep. It is a part of the Australian Kangaroo Gold Bullion Coin Series, which has been in existence for nearly 28 years. The coin was manufactured in 2012 with experts in coin collecting, quality assurance, scale calibration, and weighing also taking part in assuring this coin was made to standards. The sheer size of this coin knocked out the previous record holder, a 220 pound Maple Leaf gold bullion coin from the Royal Canadian Mint. 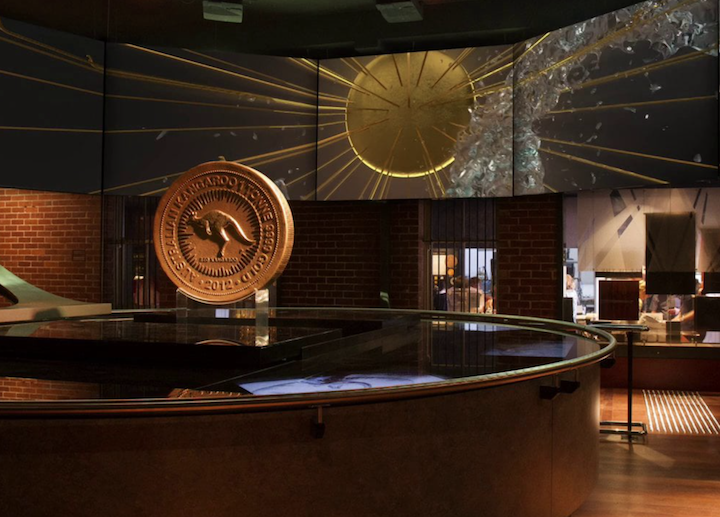 Photo via The Pod on Vimeo Pro/Wikimedia Commons

This is not just the world's largest coin, it is also the most valuable legal tender in the world. Based on the current price of gold, it is worth more than $42 million today. A $42 million legal tender coin. I would hate to be behind that person at Starbucks as they wait for change!

For what it's worth, the Perth Mint has said it would be open to selling their coin at some point… For the right price, of course.