What Was Freddie Mercury's Net Worth At The Time Of His Death?

By Amy Lamare on February 24, 2019 in Articles › Entertainment

Freddie Mercury was born Farrokh Bulsara in Zanzibar (now Tanzania) on September 5, 1946. His parents were from the Bombay Province in British India and he spent most of his childhood in India. He started taking piano lessons at age seven. When he was 8 years old, he was sent to study at a British style boarding school for boys called St. Peter's school. He formed a school band, The Hectics, at the age of 12. The band covered rock and roll songs. Mercury was a big fan of Western pop music as a kid. It was while he was at St. Peter's that he started calling himself Freddie. In 1963, he moved back to Zanzibar and into his parents' apartment. A year later, Freddie and his family fled Zanzibar during the Zanzibar Revolution, during which thousands of Arabs and Indians were killed. They ended up settling into a small house in Middlesex, England. Mercury began studying art at Isleworth Polytechnic in West London. He earned a diploma in Art and Graphic design at Ealing Art College. 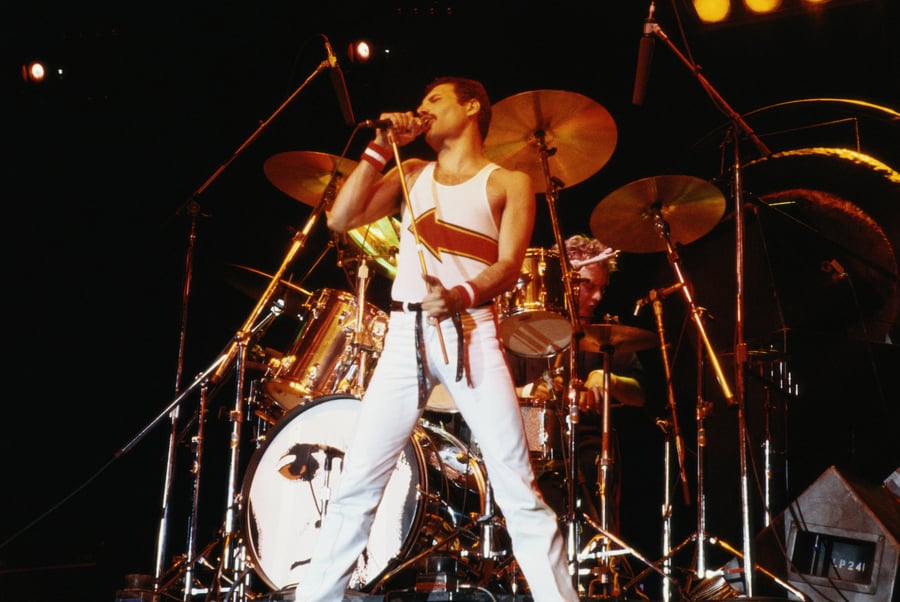 After graduation, Mercury joined a number of bands. To make money, he sold second hand clothes at London's Kensington Market and worked as a baggage handler at Heathrow Airport. In 1969 he joined Ibex, a Liverpool based band. The band didn't take off and he ended up joining a band called Sour Milk Tea, which also disbanded by early 1970. In April 1970, he joined Brian May and Roger Taylor to form a new band. In 1971 John Deacon joined the band and Mercury named the band Queen. He also changed his last name to Mercury at this time.

In 1973, Queen released their first self-titled album. It took two more albums for the band to gain traction with fans. Their third record, Sheer Heart Attack, was released in 1974 and featured the band's first hit "Killer Queen." The single hit number two on the U.K. charts and number 12 on the U.S. charts.

In the early 1970s Mercury purchased a 28-room Georgian mansion in London called Garden Lodge for $500,000 pounds. That's about $7 million in today's dollars. The house is worth at least $20 million today. He left the house to his ex-girlfriend Mary Austin when he died. Austin and Mercury had a long term relationship and lived together for several years. In the mid-70s, Mercury began an affair with a male record executive. He told Austin about his sexuality in December 1976 and their romantic relationship ended but their friendship endured. In fact, Mercury was the godfather to Austin's son Richard. In a 1985 interview, Mercury commented on his relationship with Austin saying:

"All my lovers asked me why they couldn't replace Mary, but it's simply impossible. The only friend I've got is Mary, and I don't want anybody else. To me, she was my common-law wife. To me, it was a marriage. We believe in each other, that's enough for me."

When he died and left the mansion to Austin, it was a bit controversial as he'd been in a long term relationship with Jim Hutton. In his will, he said to Austin:

Mary Austin lives in the mansion to this day.

Mercury had a long career with Queen and a number of hits in the late 1970's and early 1980s. "We Are the Champions," off 1978's News of the World was a top 10 hit in the U.S. and U.K. "We Will Rock You," "Another One Bites the Dust," and "Under Pressure" became major hits for Queen as well. Mercury also released a number of solo albums.

A flamboyant performer, Mercury was shy and reserved off stage. He was open about the fact that he was bisexual and kept his relationships private. Mercury was diagnosed with AIDS in 1987 and by 1989 he had retreated from public life. He didn't promote or tour for Queen's 1991 album Innuendo. On November 23, 1991, Freddie Mercury released the following statement:

"I wish to confirm that I have been tested HIV-positive and have AIDS. I felt it correct to keep this information private to date to protect the privacy of those around me. However, the time has come now for my friends and fans around the world to know the truth and I hope that everyone will join with my doctors and all those worldwide in the fight against this terrible disease."

He died the next day of AIDS related bronchial pneumonia in London. He was 45 years old.