What Happens To Money Confiscated From Drug Busts?

On television, police procedurals are almost as plentiful as reality shows. While the names of the shows, their casts, and the central romances and/or bromances may differ, they all share one thing in common–massive, dramatic, drug busts. These drug busts occur at least five or six times a season, and often seem large enough to equal the gross domestic product of a small country. In the real world, drug busts require a heck of a lot of planning, and are often far less successful than the average television show would have us believe. There is one major question, however, that is never really addressed on any of those television shows, or even the nightly news. After a successful drug bust, what happens to all the drugs and money that's confiscated? Turns out, it's actually pretty complicated, and could probably make for a pretty interesting drama all its own. 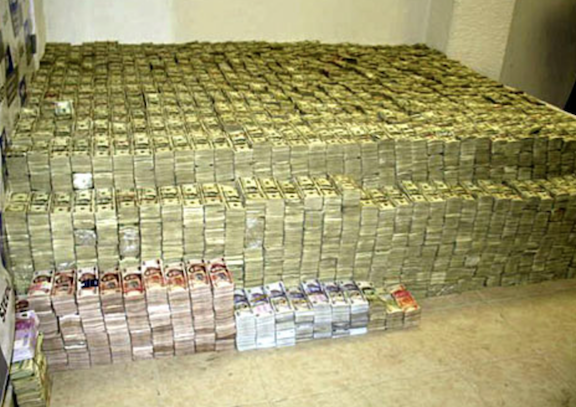 Photo via US Department of Justice / Wikimedia Commons

First, if the crime is severe, and the drugs and money are evidence, they will often be held for up to seven years. This is so that they can be used in instances where there might be an appeal, or multiple appeals. If it's a lesser crime, or the money that is seized turns out to not be involved in the crime, it is returned to the owner. There is usually a separate trial to determine what items seized in a raid are actually involved in the crime and who actually owns them. Known as criminal forfeiture, this enforcement policy involves seizing assets, including money and property, from anyone charged with illegal activity. If the person is formally charged, the money and property are turned over to the government. (This is different than civil forfeiture, in which property and assets can be seized if the police suspect a person of wrongdoing. That's a much thornier type of seizure, and has been widely abused by police departments around the world in legal systems that are based on British law.)

From there, the disbursement of the drugs and money varies from place to place. Drugs that are kept, are usually stored in a particular precinct's evidence and/or property room. These drugs are often used for training K-9 units, and for teaching working cops how to identify drugs by sight and smell. In order to keep track of the drugs moving in and out of the property room, they are weighed on the way in and out, so that nothing is stolen. This requires honesty on everyone's part, mind you, which is not always the case. Drugs are also used for "operations," meaning drug sales by undercover cops, or larger sales in order to create an opportunity for a major drug bust. Money often goes back to the government, and government officials decide how it is used. Or, like drugs, seized money can be used to make other drug deals. Some governing bodies send money directly back to the agency in charge of the seizure to use how they see fit. Other governments hold on to it for use in other ways, such as infrastructure improvement.

Over the last 20 years or so, more and more departments are using money left over from drug busts, and the auctioning off of bust-related property, to purchase items that are outside of their regular operating budget. These items can include armored cars, special guns and surveillance equipment, equipment upgrades, and SUVs. Essentially, the drug money becomes a slush fund for those expenses that aren't recurring. When used appropriately, these funds can actually aid in the "war on drugs," However, the use of drug money by law enforcement agencies is only as good as the person in charge of the funds. Just like with civil forfeiture–which was actually designed in part to provide a steady revenue stream for law enforcement agencies–drug money seized in criminal cases can be used for good or ill. It's all pretty headache inducing and complex, and while it could definitely serve as the basis of a television show, would anyone want to watch it?