Warren Buffett's Son Is Waging A War Against African Poachers. And It's Not A War Of Words.

Here's a little life lesson that everyone should jot down: You do not want to mess with a man whose father is worth $70 billion dollars. Don't believe me? Well put it this way, if I was an African animal poacher, I probably wouldn't be sleeping well tonight. That's because after decades spent brutally murdering all kinds of endangered species without consequence, poachers may have finally pissed off the wrong person. This person is a hero to animal lovers all over the world. A hero who comes armed with three very important assets: #1) A lifelong passion to help any person or creature in desperate need of help. #2) Decades of successfully solving dozens of seemingly impossible world challenges. And perhaps most importantly… #3) A never ending bank account balance to [email protected]&! these poachers up! So, who is our new hero? Warren Buffett's son Howard G. Buffett. A year ago, Howard announced that he was stepping in to end poaching once and for all. And he's not taking prisoners.

Warren Buffett's middle child, Howard Graham Buffett, is named after his grandfather and his father's favorite professor from college. By all means, Howard could have grown up to become an entitled snot. He also could have become a ruthless businessman. Or more simply, he could have chosen to live a life total leisure, doing nothing but playing golf and wasting his trust fund all day, every day. Amazingly, in the face of all these highly desirable options, Howard's dream was to become a farmer. 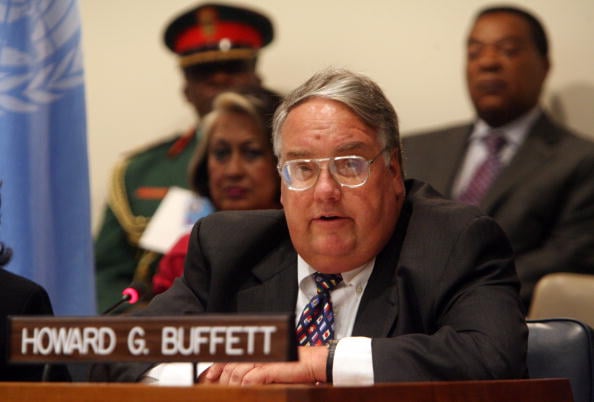 If you met Howard, you might notice a faint scar on his right arm. Believe it or not, that scar is from a cheetah bite. When Howard, was just 23 he cashed in stock he'd received from his grandfather to buy a bulldozer. He had decided to launch an excavating business. He really wanted to become a farmer but he didn't have the money to buy the necessary land. When his dad offered to buy him a small Nebraska farm, in typical Warren Buffett style—he charged his son the going market rate rent on the property.

The younger Buffett spent much of his early adult years working as a soybean and corn farmer in Illinois. Eventually Howard became the chairman of a Nebraska stage agency that focused on encouraging the building of ethanol factories in the state. He then ran for and won election to the Board of Commissioners for the country in which Omaha sits. Howard's deep knowledge of both farming and farm politics (not to mention his last name) put him on the radar of mechanical giant, Archer-Daniels-Midland in Decatur, Illinois. He soon joined the board and became a corporate vice president. From this position, Howard was exposed to a much greater view of the world's global agricultural challenges.

Howard has spent most of the last decade as a leader in the global war against hunger. Using money from his father's foundation (bequeathed to his own foundation), today Howard spends most of the year traveling around Africa experimenting with ideas designed to help poor farmers produce enough crops to feed their families. Between 2005 and 2012, The Howard G. Buffett Foundation distributed more than $400 million to a wide variety of global charity projects, the majority of which was spent in related to Africa to promote farming and sustainability.

Howard traces his interest in third-world farming to his involvement with a company called GSI Group that manufactured steel grain bins. Through this association, he was sent to South Africa to help network with the country's large grain farmers. On one of these early trips to South Africa, Howard's life goals would change forever. While photographing migrating zebras and wildebeests, he saw scars on the ground where poor farmers had used fire to clear desperately needed land. Howard came to realize that he couldn't protect Africa's environment without first fighting its food shortage. To save the environment, he had to give people a chance to feed themselves better.

In 2004, his mother Susan Buffett died. This prompted the disbursement of a large portion of the family fortune and gave him the means to dig in and make a really big difference in the world. Howard's mother's death also prompted Warren to give away most of his fortune through Bill and Melinda Gates' Giving Pledge. He also promised his three children that each of their foundations would get annual gifts of stock initially worth $50 million. For Howard, this meant that he could increase the spending of his foundation (from which he does not draw a salary) nearly ten-fold.

Howard Buffett's efforts in assisting African farmers have helped more than 1.5 million Africans to date. He personally owns 6,000 acres of farmland outside of Johannesburg that also includes a wildlife preserve. It was on this farm that he was bitten by a cheetah.

Southern Africa is home to 80% of the world's rhino population. As of April 2014, the African black rhino is considered "critically endangered", which is one step away from being "extinct in the wild" and two steps away from being fully extinct. Tragically, even under these grave circumstances, hundreds of rhinos are murdered ever year by poachers. According to the World Wildlife Foundation there has been a more than 7000% increase in rhino poaching in South Africa alone since 2007. What are these poachers after? The rhino horn.

Despite there being absolutely no scientific evidence supporting the claim, many Asian cultures believe rhino horns have many medical benefits. Asian "doctors" prescribe rhino powder in the form of tea or tablets to treat everything from nosebleeds, to fevers to strokes. In Vietnam, rhino horn is commonly believed to cure cancer. And in case you were wondering, chemically speaking, the rhino horn is  made up of the exact same compound as human hair and nails.

As a result of these 100% false beliefs, black market rhino horns have become extremely valuable. Pound for pound, today rhino horn is worth more than gold or even cocaine. The street value of a kilogram of rhino powder is said to be $75,000. And a single horn can produce 10 kilograms.

Fortunately for the planet, Howard Buffett has had enough of rhino poachers. On his most recent visit to Tanzania, the younger Buffett announced that he was launching a full-scale war on African poachers. Howard plans to use his resources to purchase helicopters, vehicles, GPS equipment, and even a cache of weapons to help protect a literal army of pilots and game rangers. The helicopter has been purchased and will arrive in Tanzania in less than six months. In the meantime, Buffett is leasing a helicopter so that patrols can begin fighting poachers as soon as humanly possible.

Through this pledge, Buffett does not only protecting elephants, hippos, Cape buffalo, and crocodiles, he is also immediately creating 450 game ranger jobs with plans to eventually expand that number by 950 more jobs over the next several years.

This is not Howard Buffett's first foray into wildlife conservation in Africa. In March, he launched a three-year initiative with his foundation and the Nature Conservation Trust to combat rhino poaching in Kruger National Park. He has pledged $23.7 million to patrol for poachers and test new anti-poaching tactics that could be used in other regions of Africa.

Kruger National Park holds more than 40 percent of the 22,000 rhinos left in the world and is the largest single population of rhinoceroses on the planet. With Buffett's funding, the park will be able to create a fortified protection zone using the most sophisticated and advanced tracking and detection equipment on the ground and in the air. The plans outline the use of elite canine units and highly-trained ranger teams used in conjunction with intelligence gathering, observation, and surveillance systems.

Through the collaboration with the Nature Conservation Trust, the Howard G. Buffett Foundation has committed a total of $175 million in funding for anti-poaching efforts. Its Africa Great Lakes Peace Initiative, as the program is named, is designed to interrupt the flow of capital from poaching to armed groups. The foundation has already spent $45 million towards conservation and agriculture development in South Africa.

And, back in 2001, Howard Buffett set up the Jubatus Cheetah Reserve in Limpopo Province. The reserve supports cheetah research and planning for conservation of the world's fastest running animal, which is currently classified as a species that is Vulnerable to extinction. I guess he doesn't hold a grudge for the bite mark!

Howard Buffett could have been content to be a corn and soybean farmer in Illinois and let his Foundation make healthy donations to the usual charities. But this remarkable man had to do more. He dug in and got involved in African farming and food supply and in South African wildlife conservation. A permanent resident of South Africa since 2007, Howard Buffett, who serves on the corporate boards of Berkshire Hathaway, Inc. and The Coca Cola Company (among others) is an inspiration that is not just changing our world, but saving it. Thanks to him, from now on, poachers will be the ones facing extinction.