Warner Bros. May Be On The Hook For $900M If They Can't Prove The Existence Of Ghosts

By Joseph Gibson on April 20, 2017 in Articles › Entertainment

Every once in a while, America's tangled web of intellectual property and copyright laws create a truly entertaining absurdity – that time John Fogerty got sued by his former record label for plagiarizing himself comes to mind. A more recent example is now the subject of a Hollywood Reporter story, involving an extensive franchise of horror movies stemming from 2013's The Conjuring. In an unforeseen turn of events, the franchise's studio, Warner Bros. ,may find itself paying out $900 million if they're unable to prove in court that ghosts are real.

Warner Bros., New Line Productions, The Conjuring's director James Wan, and others involved with the franchise are now being sued for $900 million in damages by author Gerald Brittle. In 1980, Brittle published a book he'd written called The Demonologist, a non-fiction account of Ed and Lorraine Warren, the "paranormal investigators" whose work inspired The Conjuring and its assorted prequels and spinoffs. Lorraine Warren (pictured below) gave her permission for the filmmakers to use their work, but according to Brittle's lawsuit that permission wasn't hers to give, since it conflicted with an agreement she signed with the author back in 1978:

"[W]hen Lorraine Warren granted the Defendants the right to use the Warren Case Files, which the Defendants themselves repeatedly state their movies are based on, she could not have done so because she had years earlier contractually granted that exclusive right to use those same Warren cases, Warren Case Files and related materials to the Plaintiff,. Lorraine Warren had nothing to convey." 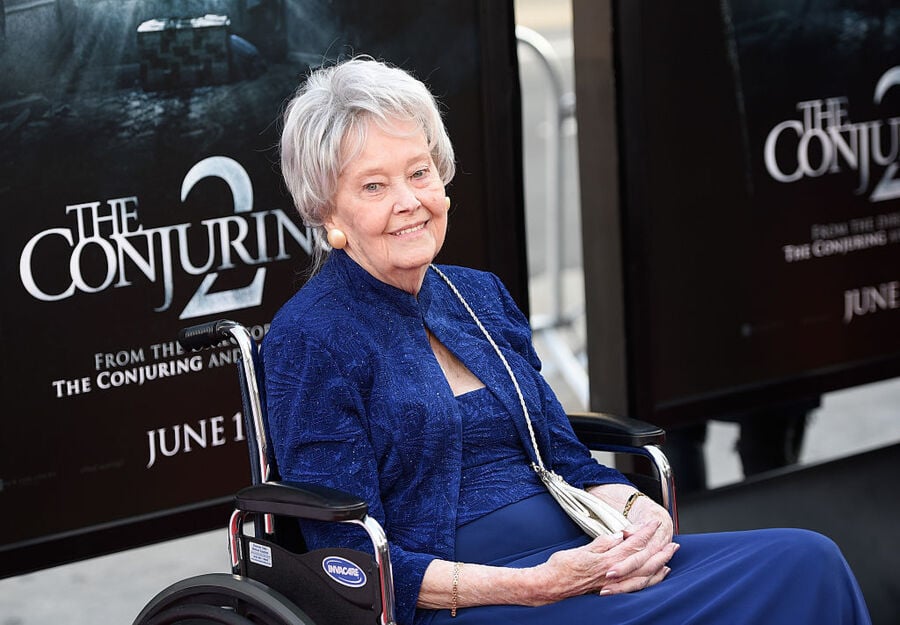 Here's where things get really interesting. According to the recently filed complaint, Brittle and his attorneys sent a cease and desist order to the defendants sometime before the release of The Conjuring 2 last year. As is often the case when a popular work is supposedly "based on a true story," the counterargument to a complaint like Brittle's is that the works in question are based on historical events rather than any specific accounting of same. The complaint addresses this as well, making the claim that unbeknownst to Brittle when he was writing the book, the Warrens were lying about the supernatural phenomena they experienced, thus rendering it impossible that it could be a matter of historical record:

"Lorraine and Ed Warrens' claims of what happened in their Perron Farmhouse Case File, which the Defendants freely and publicly admit their The Conjuring movie was based on, does not at all jive with the real historical facts. This is a pattern of deceit that is part of a scheme that the Warrens have perpetuated for years… There are no historical facts of a witch ever existing at the Perron farmhouse, a witch hanging herself, possession, Satanic worship or child sacrifice."

As you can see, this has the makings of a very interesting case, since in order to defend its use of the Warrens' stories in their movies, the filmmakers might have to argue the existence of supernatural phenomena in court. Of course, since The Conjuring franchise has already grossed a reported $890 million in worldwide box office grosses, with another installment set to come out later this year, it could behoove the defendants to work out some kind of an out-of-court settlement with Mr. Brittle. Otherwise, they might find themselves calling the Ghostbusters to help out their legal team.