Want To Make A TON Of Money? Launch A Violent Video Game Company. The Story Of Rockstar Founders Sam And Dan Houser

By Amy Lamare on August 19, 2017 in Articles › Entertainment

Sam and Dan Houser are the undisputed rock stars of the video game industry. And that is a very appropriate description considering that their company is called Rockstar Games. Over the last decade, Rockstar Games has completely revolutionized the gaming industry. Since being founded in 1998, the company has sold more than 250 million units at roughly $60 a pop. Much of those sales have been in the form of Rockstar's most famous creation, the "Grand Theft Auto" (GTA) franchise. In case you have been living under a rock for the last decade, GTA is the game where players steal cars, rob banks, and murder prostitutes while accomplishing missions for underworld bosses. The game has generated plenty of controversy for the company and the Houser brothers. Along the way, GTA also made the Houser brothers incredibly wealthy. This is the story of how two mild-mannered brothers from London came to absolutely dominate the video game industry while earning massive fortunes. One dead prostitute at a time.

Rockstar is to video games what Apple is to the personal electronics industry. Before Rockstar, video game companies predominantly catered to little kids and geeks with G-rated titles that were churned out as fast as possible to make room for the next batch. Now consider this: Rockstar spent $250 million dollars to develop "Grand Theft Auto 5" (GTA5). That's bigger than the budgets of "The Avengers", "Iron Man 3" and even "Avatar".

You would think $250 million on one game sounds like a risky bet, right? Well it turns out that GTAV had three million pre-orders at $60 per order, months before the actual release. The game's predecessor, "Grand Theft Auto IV" sold $500 million worth of units in its first week of release. When GTAV was eventually released in September 2013, it brought in $1 billion worth of sales within three days, absolutely obliterating all sales records. So where'd this all start? 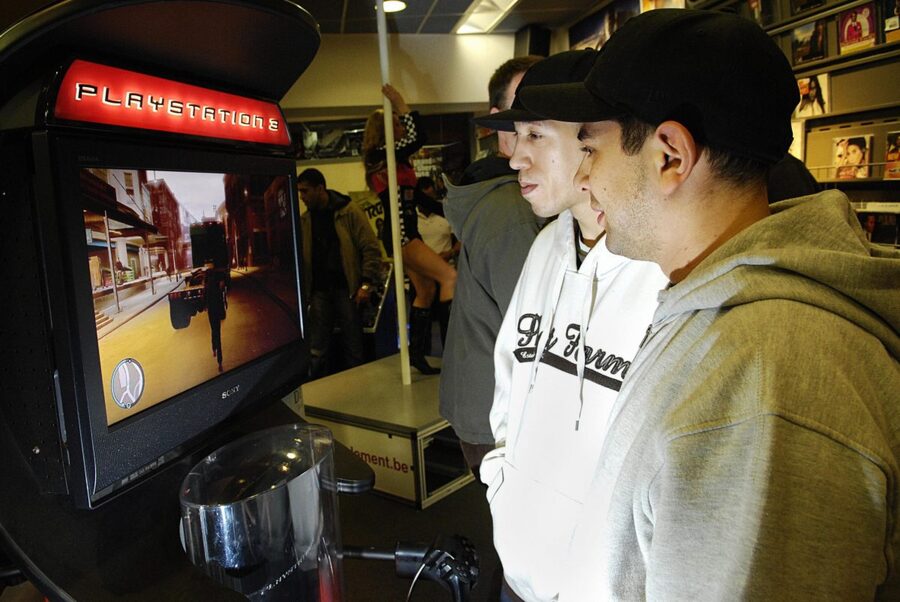 It was the early 1980s, and Dizzy Gillespie, the legendary jazz musician, had just been introduced to the son of a wealthy London attorney named Walter Houser. Walter just happened to be the co-owner of a jazz joint called Ronnie Scott's club in London's Soho district.  Gillespie asked Sam Houser what he wanted to be when he grew up. Sam, who was not yet a teenager, did not even pause before replying: "A bank robber".

The Houser brothers grew up in London in affluence. Their father, as mentioned, is an attorney.  Their mother is Geraldine Moffat, the upper-crust English actress who played Glenda in 1971's "Get Carter".  Sam and Dan were educated at the $30,000 per year public school St. Paul's and were picked up after school each day in their dad's Rolls Royce.  Sam was said to have been obsessed with hip hop and gangster movies and was an underwhelming student. Dan was the more studious of the two, he went on to Oxford to study geography.

Sam went to work for BMG where he was on the team that launched the Spice Girls. He also directed the video for the 1992 "Take That" song "Take That And Party". Several years later, Sam was working in BMG's interactive division when a Scottish company pitched a potential game called "Race and Chase". In the game, players could chose to be cops or robbers.  Sam re-jiggered the format so that gamers played gangsters and re-named it "Grand Theft Auto".

Sam Houser's version of Race and Chase launched in 1997. Not long afterwards, BMG sold off its gaming division. This presented Sam with the perfect opportunity to branch out on his own. He quickly co-founded Rockstar with baby brother Dan.

As we mentioned previously, since being founded in 1998, Rockstar has sold more than 250 million units of their various video games. The vast majority of those sales, roughly 150 million, have been the Grand Theft Auto franchise. Assuming each game costs on average $60, selling 250 million units has generated roughly $15 billion in revenue for Rockstar.

Instead of becoming bank robbers, Sam and Dan ended up becoming massive bank depositors. The brothers, who now live in New York City, each have a net worth of $80 million dollars.

The 40-something year old brothers dress like rap stars in baggy jeans and chunky jewelry. They are obsessed with the image of their company, which they modeled on the hip hop record label Def Jam. Sam is the idea man that has been called  demanding, a workaholic, and secretive. He's said to have a temperament befitting a Hollywood mogul – and that is most assuredly not a compliment.

Dan, who is two years younger than his brother, writes the scripts for the company's games. He lives in the 11-bedroom Brooklyn mansion where Truman Capote wrote the 1958 novella "Breakfast At Tiffany's".

The Rockstar offices reflect the misogynistic ethos that you would suspect from the creators of GTA. Nearly all of their employees are male. Company parties have featured strippers wearing Catholic girl school uniforms. Employees are encouraged to take part in cheese ball eating contests and are given bottles of tequila to clear their palates.

Not surprisingly, the Houser brothers are notorious for the grueling expectations they place on their staff. Most are required to work 70-hour weeks, feeding the brothers' quest for perfection.  In fact, several years ago, a former assistant to Dan Houser told the Wall Street Journal that he once called her a "whore" and that famous C word when she brought him the wrong bagel. Sam Houser, it has been alleged, is famous for throwing telephones across the room and screaming at employees.  The brothers have been compared to 'the kids on the island in Lord of the Flies'.

In Rockstar's early days, GTA's success was built on its notoriety. Sam hired a publicist to create controversy over the game. It turns out that wasn't needed. After the Columbine High School shootings and other mass murders were blamed on the violence in video games, the Houser brothers came under scrutiny and heavy media fire.  It culminated in 2005 when then Senator Hillary Clinton denounced the 2004 title GTA: San Andreas after a secret, hardcore pornographic scene was discovered embedded in the game.

Rockstar's mission seems to be to give their customers exactly what they want in a video games. And the gaming public seems to want violence. When other video game producers were making games that allowed you to save a damsel in distress, Rockstar was building a blockbuster franchise that let you shoot cops and prostitutes. In fact, that's sort of the genius of GTA.  The Housers pretty much perfected the concept of free will in gaming characters.  It is the gamer's choice to follow the story, take part in missions, or roam the streets freely.  This is one of the most important and compelling aspects of the game. Sure, it is violent, but in the end it is the gamer's choice to car jack a car, commit a murder or simply go for a joyride through Liberty City.

What drives the worldwide fascination with GTA? Whether it is the violence, storyline, free will, or escapist fun, one thing it for sure, Rockstar has redefined many aspects of gaming. From music to art to violence to stories, Rockstar has changed the way it is done. It strives to do what other game producers said couldn't be done – like casting Burt Reynolds and Samuel L. Jackson for voiceovers or licensing the rights to Michael Jackson's "Beat It", and it has resulted in billions of dollars worth of revenue for the company and tens of millions in wealth for the two founders.