Want To Become A Billionaire? All You Need To Do Is Create An Energy Drink.

By Brian Warner on September 4, 2014 in Articles › Entertainment

As you have hopefully noticed, one of our main objectives with the articles we post on Celebrity Net Worth, is to help inspire our readers in your quest to become extremely rich. That's why we post so many awesome rags to riches stories of people who pulled themselves up from their bootstraps and made huge fortunes from nothing. That's also why we post articles about people who have blown huge fortunes, so you'll know what NOT to do once you're swimming in your Scrooge McDuck gold coin vault. Well, it turns out becoming a billionaire really isn't as hard as we always imagined. Apparently, if you want a 10 figure bank account, all you need to do is create an energy drink company. In fact, it's a simple four step process.

Great news right? It gets better! Not only is creating an energy drink pretty much a guaranteed route to fame and fortune, unlike most products made for human consumption, your future beverage doesn't even need to taste good! It can actually taste pretty awful and you'll still end up rolling in cash.

There's more good news. Once you've concocted your vile-tasting elixir, you wont even need to come up with a unique and creative marketing campaign. That's because there's already a guaranteed-to-work marketing formula for energy drinks seemingly never gets old, no matter how many copy-cat companies pop up and follow the exact same strategy to a tee. It's a formula that I recently coined "big cans and big cans". I think I'm literally the first person to think of that amazing slogan, I'm gonna try to get it trademarked.

Oh and there's one more awesome piece of news. Despite the fact that there are literally dozens of different brands and flavors of energy drinks (plus coffees, and sodas), apparently there's always room for more. The market for energy drinks is never over saturated. Don't believe me? Well, 5-Hour Energy barely existed a few years ago, at a time when it seemed like the world couldn't possibly need another type of drink that helped keep people awake. Guess what the founder of 5-Hour Energy is today? A fucking billionaire. 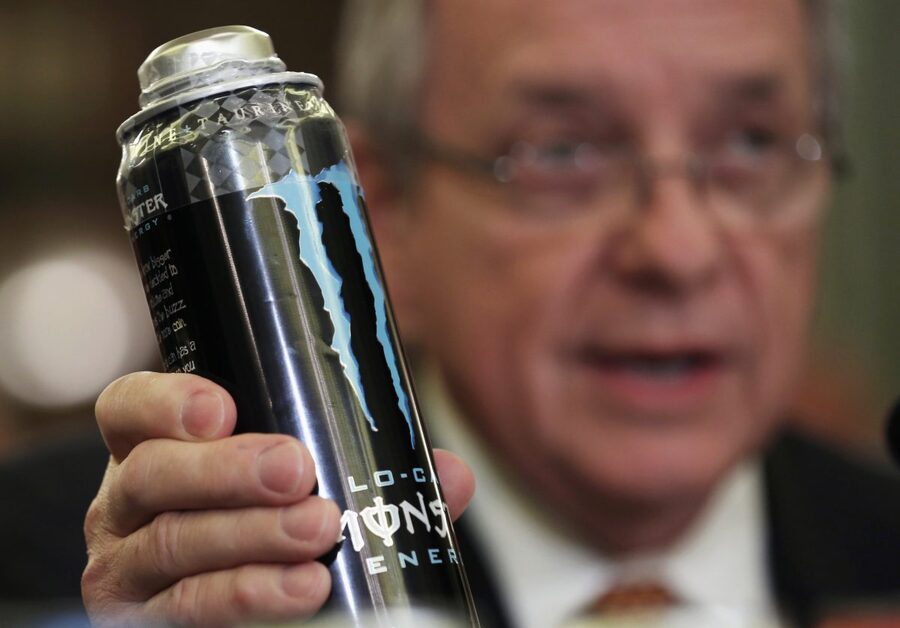 Step 1) Create an energy drink. You're gonna want to come up with a cool brand name that connotes the idea of being a hard-partying celebrity, a scary animal or anything related to extreme car engines. Here are some brand name ideas that I just thought of, off the top of my head. Feel free to use any of these, but give me a cut when you go public: Liquid Jagger. Sheen Blood. Supersonic. Mach 9. Chupacabra. Jet Fuel… You get the idea.

Step 2) Find out which energy drink that is currently on the shelves has the biggest can. Now make your can 20% bigger. (Reminiscent of the six minute abs marketing theory).

Step 4) Sit back, and rake in a billion dollar fortune.

I call the combination of steps #2 and #3 the "big cans and big cans" marketing strategy (trademark pending). And if you DON'T think this strategy works, tell that to Rockstar, Monster, Red Bull, NOS and every single other energy drink that dominates the shelves of your local 7-11.

Example Billionaires Who Followed This Formula:

Below is a list of five entrepreneurs who started with nothing but a dream and ended up becoming billionaires by following the strategy I have laid out above. Technically Red Bull created two billionaires, but unfortunately co-founder Chaleo Yoovidhya died in 2012. Chaleo's net worth at the time he died? $5 billion. Also, I want to point out that both NOS Energy drink and Full Throttle energy drink are owned Coca-Cola. Amp Energy Drink and Sobe Energy Drink are both owned by PepsiCo. So even though these four brands have followed the same formula above, they aren't owned by individuals and therefore haven't really turned any one person into a billionaire.

Founder of Rockstar – Net Worth: $1.3 billion (Famous for buying broke-producer Scott Storch's Miami mansion in foreclosure for $6.75 million and flipping the house less than two years later to rapper Birdman for $15 million. Also bought a house in Hermosa, California for $10 million and flipped it ONE MONTH later for $13.9 million. The guy is legit.)

Founders of Monster – Net Worth: $1 billion each

Now It's Your Turn!

You know the formula. I've laid out the exact game plan and even given you some brand name ideas to get you started. Now go out there and make a billion dollars! And when you do, you should let me wet my beak a little. I don't want a lot. Maybe a 1-2% equity stake at most. Just enough to wet my beak.