Virgin Records Once Paid Mariah Carey Millions to Go Away

By Mark Kurlyandchik on October 12, 2016 in Articles › Entertainment

In 2001, Virgin Records signed Mariah Carey to one of the biggest contracts in record-industry history — a five-album deal that guaranteed her an estimated $100 million. At the time the contract was signed, Mariah was on top of the world. Other than The Beatles, no other artist had put out more number one Billboard Hot 100 singles. It was the kind of contract only a diva could negotiate. She was paid $21 million right out of the gate with no strings attached at all. She didn't even have to put out an album to keep that paycheck.

Unfortunately, this deal did not turn out well. After Mariah's career took a dramatic slide, Virgin made an insane decision. They weren't going to wait it out and cross their fingers that her career would recover. Nope. The decision was that Virgin would pay Mariah to go away. And not a little bit of money. Virgin wrote a check for $28 MILLION just to make Mariah go away. When it was all said and done Mariah was essentially paid $49 million for a single failed album. But she ended up having the last laugh… 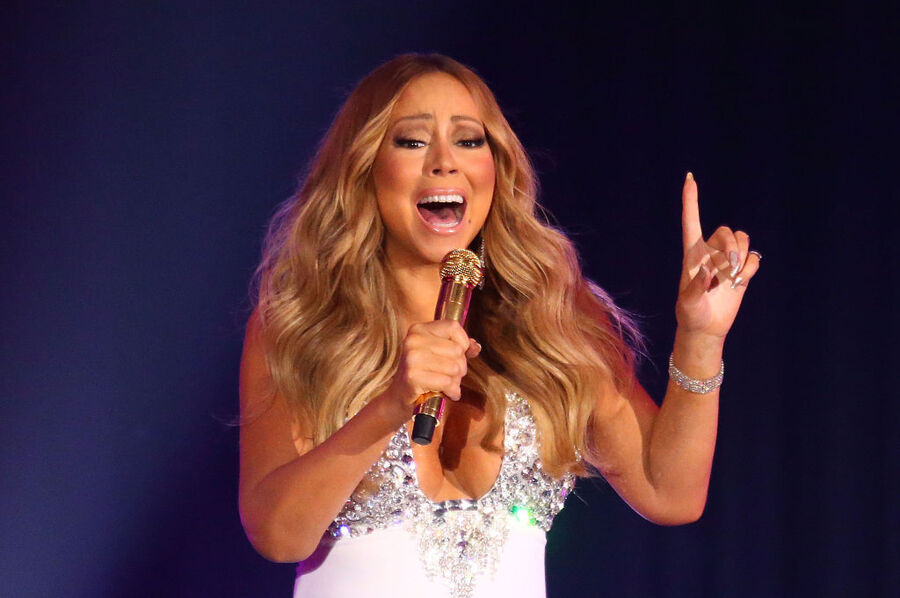 Glitter, Carey's first and only album with the label, sold only 3 million copies worldwide. Her film debut touting the same title had been delayed and downsized after Carey suffered a well-publicized nervous breakdown. The film opened on September 11, 2001 — a day when the whole world's attention was on decidedly more important matters. Rumors began to swirl that the label was looking to cut its losses on their investment in Carey.

EMI Group, Virgin's parent company, had been searching for ways to cut costs after a bleak year. In September 2001, it was projected that if things continued on the path they were on, profits would drop 20 percent. EMI's stock had lost over a third of its value over the previous year, highlighting concerns of declining album sales and competition from music download sites. EMI Group had just announced the hiring of new chairman and chief executive of recorded music, Alain Levy, who was set on writing off the loss before the end of the fiscal year that March. Levy, who was hired with strict instructions to cut costs, proceeded to fire Nancy Berry, the Virgin exec who initially signed the deal with Carey, as well as Paul Conroy, the head of Virgin. Levy cited the pair's excessive salaries and lifestyles as reasons for their release.

The monstrous deal with Carey wasn't totally without peer at the time. R.E.M. received the same amount from Warner Brothers for five records in 2006, and Whitney Houston received $100 million from Arista Records for six albums in 2001. But at a time of dwindling CD sales and the battle over pirated music, the label felt they couldn't sustain such lucrative contracts.

Virgin insisted the split was nothing personal against the singer. However, the loss couldn't have come at a worse time for Carey, who had been making regular appearances in the gossip columns since the 1997 deterioration of her marriage to Tommy Mottola, the former head of Sony Music who had discovered the then 18-year-old Carey when she was a backup singer for Brenda Starr. Having gotten his hands on Carey's demo at an industry party, Mottola listened to the tape on his way home from the event. So impressed by the singer's vocals, he had his driver turn around so he could return to the party and set up a meeting with Carey. Three days later he offered her $50,000 and the promise that he would make her the biggest pop star in the world — on the condition that she got rid of her business partner, who also happened to be her boyfriend.

Carey and Mottola wed in 1993, but the relationship was nothing short of abusive. Carey described her marriage to the controlling and manipulative record exec as a "private hell." The couple divorced after a four-year union. Now free of her dominating relationship with Mottola, Carey was still under contract with Sony. She began to insist that Sony was taking too much money from her efforts, and publicly feuded with the label over choice of singles. Another split was imminent.

Enter: Virgin Records' blockbuster offer. In addition to millions of dollars, the deal also granted Carey full creative control — a nice change of pace from Sony's overbearing style. But the timing proved unfortunate. Several cases of erratic behavior by the singer were reported soon after the deal was inked. During a July 2001 interview on MTV's "Total Request Live," Carey asked host Carson Daly to kidnap her before spouting a tirade about therapy. Her behavior prompted Daly to announce, "Ladies and gentlemen, Mariah Carey has lost her mind." Citing "extreme exhaustion," the singer checked herself into a Connecticut rehab facility days later. Consequently, the label delayed the release of her film, Glitter, and the soundtrack that accompanied it, dampening any hype around the project. It didn't help that when Glitter was finally released in the fall, the critics absolutely hated it. Audiences were less than enthusiastic, too, causing Glitter to become her worst performing album up to that point. Virgin quickly ended its relationship with Mariah Carey.

Some have questioned whether Virgin was too hasty in its severing of ties with the singer. To be sure, the early 2000s were some of the worst years of the singer's career, despite a new contract with Island Records worth $24 million. But it was Island that eventually benefited from her return to the top of the charts in 2005 with the hugely successful album, The Emancipation of Mimi which sold 12 million copies worldwide. Her next album, 2008's E=MC² sold more than 4 million copies worldwide and her 2009 album Memoirs of an Imperfect Angel sold 3 million copies worldwide.

Today Mariah's career is as strong as ever. So in the end… it probably would have been best for Virgin Records to wait this out a bit…