How Vince McMahon Became The Billionaire King Of Wrestling

By Paula Wilson on January 25, 2018 in Articles › Entertainment

Even people who have never watched a single minute of professional wrestling have heard the name Vince McMahon. Vince's name rings out over the world and is synonymous with two things: wrestling and money. Wrestling is in Vince's blood. Both his father and grandfather were promoters. Vince himself knew that the world of wrestling was where he was going to find fame when he was only 12 years old.  He probably had no idea just how far his wrestling dreams would take him, however.  Armed with a business degree, and a whole lot of ambition, Vince would go on to earn a staggering amount of money and change the world of television forever.

Vince McMahon was born in Pinehurst, North Carolina on August 24, 1945.  His birth father left the family when Vince was still a baby. His childhood was filled with a string of stepfathers, many of whom were abusive to both Vince and his mother. One was so abusive that years later Vince would say "It is unfortunate that he died before I could kill him. I would have enjoyed that."

When Vince was 12, he finally met his birth father, Vincent James McMahon. Vince Jr quickly discovered that wrestling was in his blood. Vince's father worked as a promoter for a company called Capitol Wrestling Corporation (CWC). The CWC was founded by Vince's grandfather, Jess McMahon. Jess McMahon was a former wrestler who went on to build an extremely successful career as a promoter of both wrestling and boxing. The CWC dominated wrestling throughout the 1950s, thanks mainly to the fact that they controlled promoting rights at New York's Madison Square Garden. When Jess died in 1954, Vince Sr was brought in to run the company with CWC co-founder Toots Mondt. 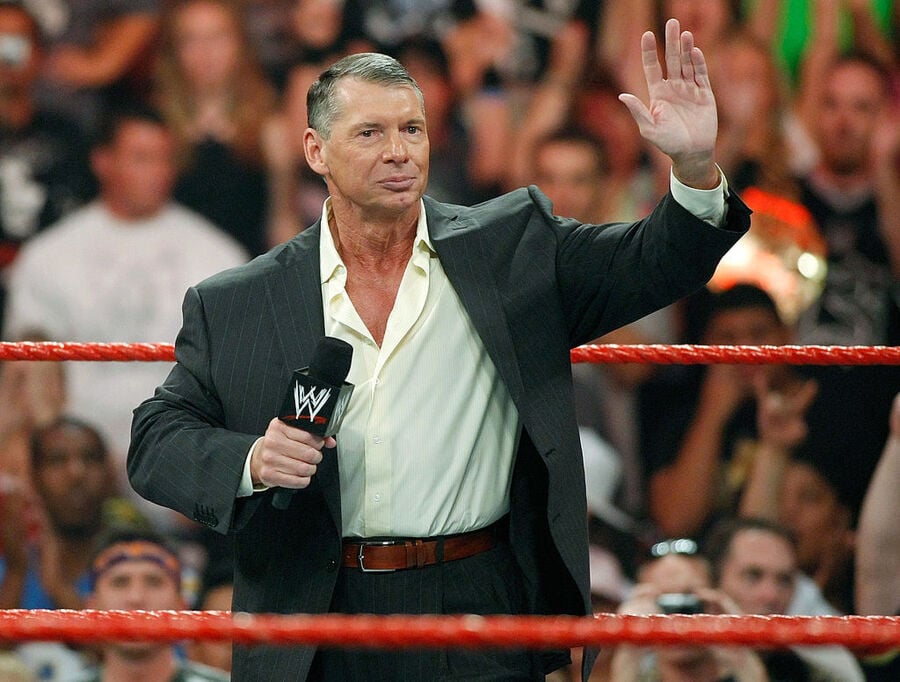 In 1963, Toots and Vince decided to strike out fully on their own by forming the World Wide Wrestling Federation (WWWF). The WWWF employed a unique strategy to build awareness and sell tickets. First off, the WWWF held events once a month instead of bi-monthly as was standard at the time. By restricting their events, they were able to build up way more anticipation. Secondly, the two promoters began incorporating intricate plot lines into each of their events. The plot lines frequently featured a slightly smaller baby-faced "good guy" overcoming a large ugly "bad guy". This two-part strategy seems obvious and simple in retrospect, but it was fairly revolutionary at the time. By 1970, WWWF events were selling out stadiums up and down the East Coast.

Vince Jr began working for his father at the Capital Wrestling Corporation while he was still a teenager. Then after graduating from East Carolina University with a degree in Business, Vince went to work at the WWWF.  His first job was as the in-ring announcer for "All-Star Wrestling".  Throughout the 70s, Vince took on more and more responsibility at the WWWF. He quickly proved himself to be extremely talented at running a business.

Vince renamed the company simply the World Wrestling Federation. He soon tripled the number of television syndication deals for matches. He bought a coliseum in New England which allowed them to cross-promote hockey, concerts, and wrestling. He also launched Titan Sports, a sister company. Vince was formally made Chairman of the WWF in 1980, and bought the company from his father, outright, in 1982.

For the next decade, Vince would literally reshape the face of televised entertainment and the world of wrestling promotion worldwide.  Ignoring the previous system of promoting within regions, he began to promote nationally.  He positioned popular wrestler, Hulk Hogan, at the front of his promotional deals, and began to take the entire country by storm.  He started featuring popular pop/rock stars at his events, and wrestling matches became part main event, part concert.

MTV jumped on board, and suddenly, a whole new audience was being introduced to wrestling.  In 1985, he created "Wrestlemania", a massive wrestling event held at Madison Square Garden.  The event was highly successful, and led to even greater interest in wrestling.  It also positioned Hulk Hogan as the new face of wrestling.  With his more "family-friendly" face and style, wrestling began to shift from tough guy mega-sport, to entertainment for the whole family.  Vince ran with the shift in audience makeup, and began promoting glossy pay-per-view events built around the increasingly popular WWF stars.  By the late 80s, the World Wrestling Federation was a money-making machine.

Facing stiff competition from World Championship Wrestling in the 90s, Vince retooled the WWF's image once again.  This time the shift was toward more adult story lines and tougher brawls.  The same audiences who had watched the WWF as children, were now adults, and they wanted their wrestling entertainment to reflect their shift in attitude and age.  New wrestling stars were launched, and the entire franchise took on an edgier tone.  He also began to insert himself into story lines, first as a "heel" announcer, and later as a wrestler, participating in various brawls, including a "Battle of the Billionaires" fight with Donald Trump.  He also began including his family members in the business, with his wife, son, and daughter all working in executive positions for the company, as well as appearing in story lines.  Next, Vince started buying up other struggling wrestling franchises.  He bought World Championship Wrestling, formerly his chief rival, for just $5 million in 2001.  He purchased Extreme Championship Wrestling in 2003 after it filed for bankruptcy.  By the mid-2000s, he was the only major North American wrestling promoter left in the ring.

However, the brand was still struggling.  While he was still the top promoter in North America, wrestling itself was beginning to fade as a money-making venture.  Stars like "Hulk" Hogan, "Stone Cold" Steve Austin, and "The Rock", had moved on to successful movie careers and their own business ventures. Other possible wrestlers retired or had had passed away.  While there were still popular wrestling stars, no one had really become part of the popular consciousness like the wrestlers of the 80s and 90s.

The WWE became a publicly traded company on October 19, 1999 at a price per share of $17. It debuted on the New York Stock Exchange a year later. With a market cap of $1.2 billion, Vince's 57% ownership stake was worth $726 million.

The stock performed moderately for the next few years. Vince was a paper-billionaire for a time in 2008. Unfortunately, WWE's stock was a major disappointment between 2009 and 2013. There were a handful of bright spots in 2010, but the share price dropped to all time lows throughout 2012 and 2013. In June 2012, WWE's share price bottomed at $7.5. Vince's shares were worth $320 million.

In 2014, WWE's stock went on a tear thanks largely to its newly launched subscription channel called the WWE Network.  The streaming service, which had been in the works since 2011, became available in February 2014. WWE shares shot through the roof. As of this writing, Vince's 57% stake in the WWE, is worth $1.5 billion.

Today the company is a profit juggernaut that includes merchandise, concerts, film and television ventures, and sports.  A juggernaut that has flirted with many acquisition offers. Comcast, the Madison Square Garden Co., Live Nation, AMC Networks, and even Disney, have all eyed the wrestling mega-corporation.  Everyone has slightly different plans for the WWE should they take it over.  However, one thing is certain – if he ever wants to sell the business, McMahon will make an insane amount of money.  Potentially $3-4 billion personally. I wonder what Vince Sr and Jess McMahon would have to say about that!

In January 2018, Vince sold $100 million of his personal WWE holdings. It has been rumored that he sold the shares to fund a re-boot of the XFL 🙂