By Amy Lamare on January 3, 2015 in Articles › Entertainment

Life advice: If you build a business that supplies millions of people every day with their all-time favorite food, you'll die a very happy and very rich person. Prime example? Nepalese entrepreneur Binod Chaudhary. Binod is the founder of the massively successful Chaudhary Group, which actually owns interests in everything from banking, cement, real estate, hotels, power, retail, and electronics. But regardless of how diverse his empire is today, the majority of his initial wealth came from one product. A product that is a staple of pretty much every lunch and dinner in Asia. That product? Noodles. Lots and lots and lots of noodles. Binod owes his fortune to his company Wai Wai Noodles. Wai Wai would never have existed without a vacation to Thailand many years ago, and today has turned him into richest person in Nepal and Nepal's first billionaire.

Binod Chaudhary was born in 1955 in Kathmandu, Nepal. He and two brothers were raised by their parents Lunkaran Das and Ganga Devi to be Maoists (communist). His grandfather migrated to Nepal from India as a textiles trader and later owned a small textile store that his father turned into the Arun Emporium, Nepal's first department store.  Chaudhary, the eldest son, left school at 18 to help out in the family business when his father was stricken with heart disease.  When he took over, Chaudhary Group had 400 employees. Today, the company employs more than 7,500. 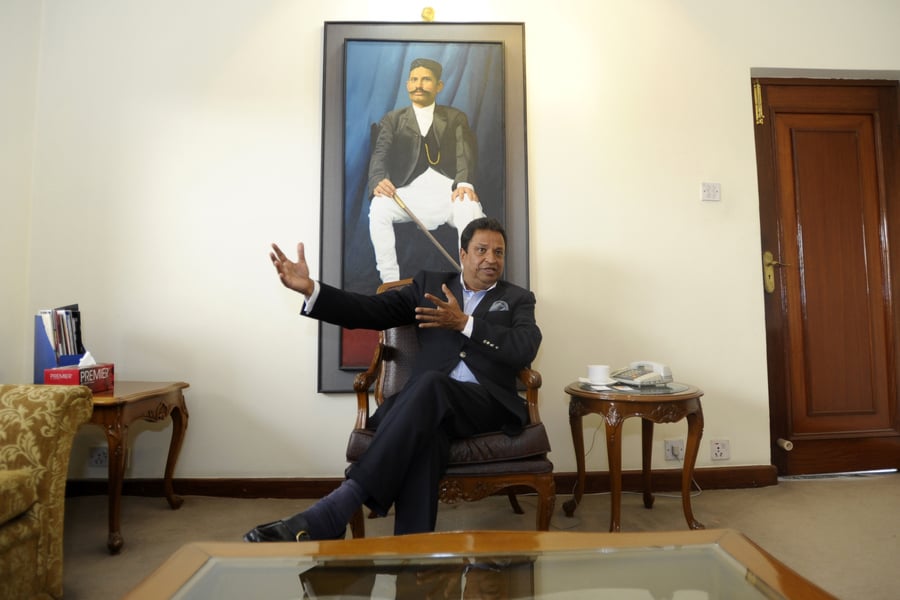 At some point early in the early 1970s, Binod took a vacation to Thailand. On that vacation, Binod couldn't help but notice an unusually high number of his fellow Nepalese were going into grocery stores and buying out their entire supplies of instant noodles. Regular noodles had been around in Nepal for generations, but instant noodles did not exist in Nepal. This gave Binod an idea. His family already owned a mill that was producing flour, so producing instant noodles wouldn't be much of a leap. And with that, Wai Wai Noodles was born.

Wai Wai Noodles are pre-cooked and pre-flavored. All the hungry person has to do is add hot water and wait a few seconds. The noodles can be eaten straight from the package or cooked as a soup. The were an instant hit (pun intended) at home and abroad. Today the company operates noodle factories in Nepal, Thailand and India.

Though Chaudhary has become a very wealthy man thanks largely to his Wai Wai noodles, he has never tried their best-selling Wai Wai 1-2-3 Chicken Noodles because he is a vegetarian. This product makes up 95% of Wai Wai's sales of one billion packets of noodles annually.  That's a lot of instant noodles!

While Wai Wai noodles bring in the bulk of the Chaudhary Group's profits, it is far from its only moneymaker. Nepal's first billionaire made a huge amount of his money overseas through a chain of luxury hotels in India and properties in the UAE, which began when he traveled to Dubai to negotiate a controlling stake in Nepal's Nabil Bank.

The Nabil Bank negotiations took Chaudhary to Dubai in 1990, where he struck a deal to acquire Emirates Bank's stake in the Nepalese bank. Dubai, at the time was a country that hardly resembles the wealthy emirate it is today.  At first, Chaudhary had little interest in the UAE, which he saw as a dusty outpost with more sand than commerce and infrastructure.  A tip from a friend in 2004 led Chaudhary back to that part of the world and he saw a vastly changed place and knew he had to be involved in it.  He started gobbling up property in the form of more than 300 apartments. .

By 2008, those properties had nearly quadrupled in value from 2004, and then the property market collapsed worldwide.  His properties lost nearly 75% of their value, but while Chaudhary recognized this as a big blow, he made the choice to stay put while other investors pulled out of UAE countries.  It was a wise move as the region is finally recovering while Chaudhary and his two sons continue to expand the business both in Nepal, India, Asia and elsewhere in the world.

Chaudhary was a member of the Nepalese Maoist-led parliament which was dissolved last May. Despite this upheaval, which includes the country abandoning its 240-year old monarchy in 2008, Chaudhary remains optimistic about the possibilities for economic growth in his country.  Improved access to schools, healthcare and water are just the start. The Nepal Chaudhary envisions has vast potential that extends far beyond tourism.

So what's the lesson here? Lots of people believe the key to earning a fortune is finding a niche and dominating. That's exactly what Binod Chaudhary has done, except his niche is massive. Millions, probably even billions, of people are in the "love to eat noodles" niche, and Wai Wai Noodles targets all of them. Like I said at the beginning of this article, if you build a business that supplies millions of people every day with their all-time favorite food, you'll die a very happy and very rich person. Just like Binod.